​14.1 POJA-L6227-B Electron micrograph of the sarcomere structure in myofibres  (human) 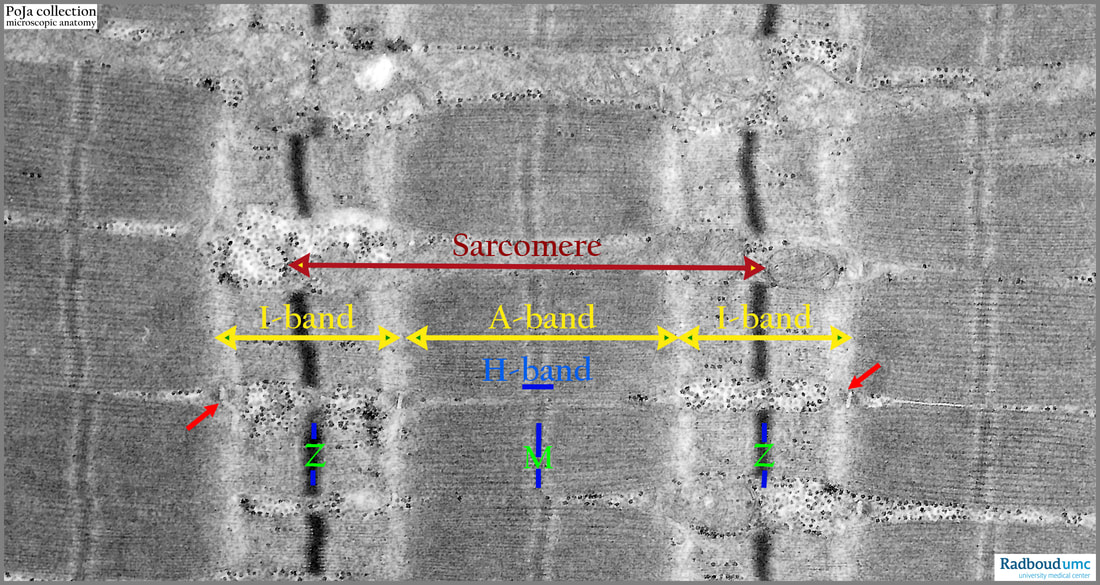 Description:  Between the bundles of myofilaments small vague profiles of cross sectioned mitochondria and densely stained glycogen granules are localised.

Background:
The contraction unit comprises the thin filaments, α-actin and associated proteins, and thick filaments (myosin and associated proteins). The Z-line (or disc) represents a dark line within a lighter I-band (isotropic). The sarcomere unit runs from Z-disc tot Z-disc. In the centre of the sarcomere is a dense A-band (anisotropic) made up of thick filaments, with a lighter H-zone. The M-line (or band) bisects the H-zone (or band).The thin filaments are held together in the Z-disc. The M-band is the interconnection site for the thick filaments.
This figure also illustrates the electron microscopical elements of the sarcomere filaments as well as the position of mitochondria between the sarcomere units (human). The triad system (red arrows), i.e., the cross sections through sarcoplasmic reticulum cisterns that are adjacent to the invading T tubules of the sarcolemma serve for the release and restorage of Ca ions upon neurogenic stimulus.