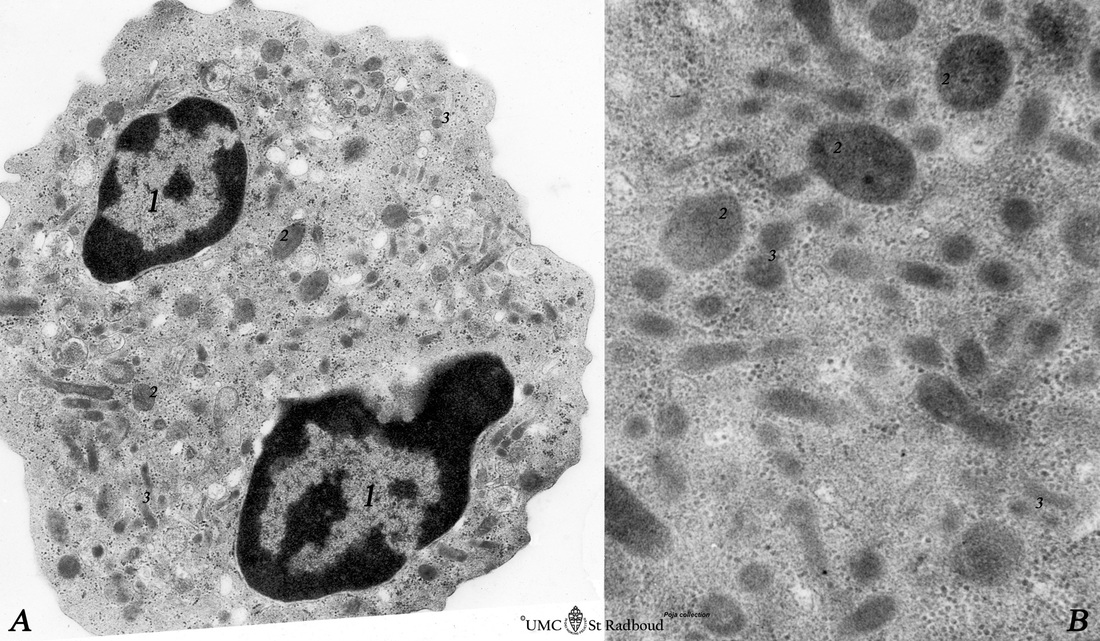 Survey (A) and detail (B) of a neutrophilic granulocyte. Two nuclear lobes (1) of the segmented nucleus are visible in a cytoplasm with a moderate amount of organelles but with abundant granules (2, 3) of varying sizes. The detail shows in the cytoplasm large amounts of granules of varying forms, sizes and densities. The motile human neutrophil (9 – 14 mm) contains at least four types of granules.
The primary granules (2) are spherical to ellipsoid (lightmicroscopic) azurophilic granules, and are large (0.4 mm). They contain e.g. acid hydrolases as acid phosphatase, arylsulfatase, b-glucuronidase, but also myeloperoxidase as an antibacterial substance.

The majority of smaller (3) granules of varying sizes and forms (diameter 0.2 mm up to length 0.8 mm) are the specific, or secondary granules, they contain substances like lysozyme, phagocytin to be secreted extracellularly involved in mobilization of inflammatory mediators and complement activation.

With immuno-electron microscopy a third type of granule (secretion of gelatinases) and a fourth type of granule (so-called phosphasome) with alkaline phosphatase can be discerned. See also POJA-L604 legends for the specification of the four types of granules.