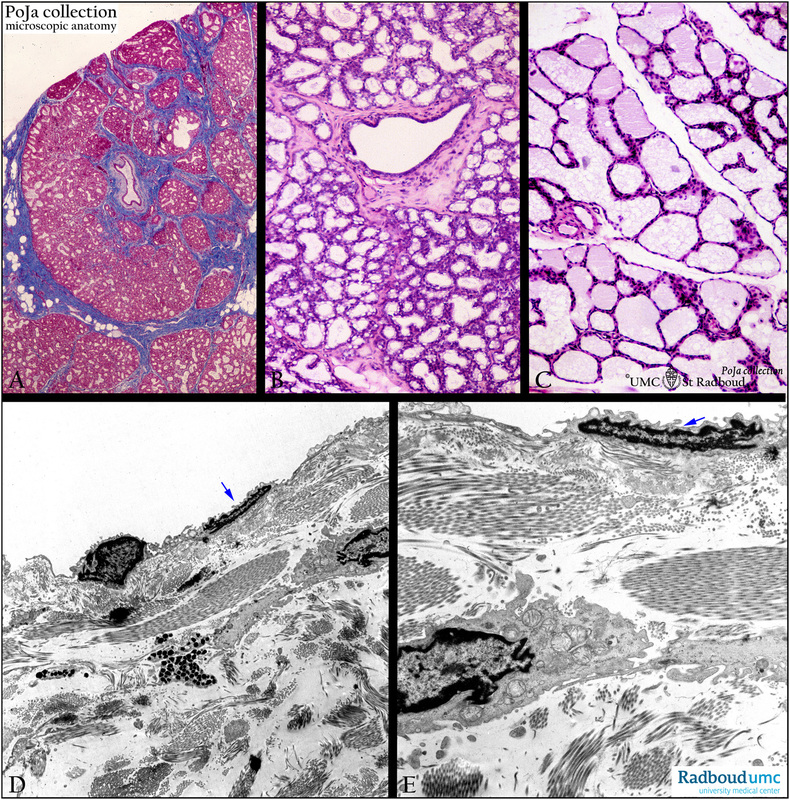 (A, B, C): The mammary gland consists of several separate tubuloalveolar glands organized in lobules separated by connective tissue strands (blue). The glands transport the secretion via intralobular and interlobular ducts tot the ductus lactiferus having a single or double layered epithelial lining. The secretory ducts of the mammary gland start to sprout during pregnancy into alveoli and lobules. Depending on the secretory state the gland epithelium has different heights, the alveoli can be wide and well filled with secretion product. The fat droplets in the active lactating gland are found supranuclear in vacuoles that are secreted by pinching off in an apocrine manner. The protein granules are secerned in an eccrine way. As shown in (B) active epithelial cells show numerous vacuoles.The alveolar content, enriched with milk sugars, is subsequently emptied by action of the surrounding myoepithelial cells, which are stimulated by oxytocin and prolactin (hypophysis). The secretion of milk is stimulated by prolactin. After the menopause the glandular tissue gradually involutes, and the epithelial cells are flattened.

(D, E): The breast is well provided with lymph vessels which have an extremely thin wall and a very flat endothelial lining (arrows). The vessels are embedded in connective tissue (skin) with numerous collagen fibers (shown here).