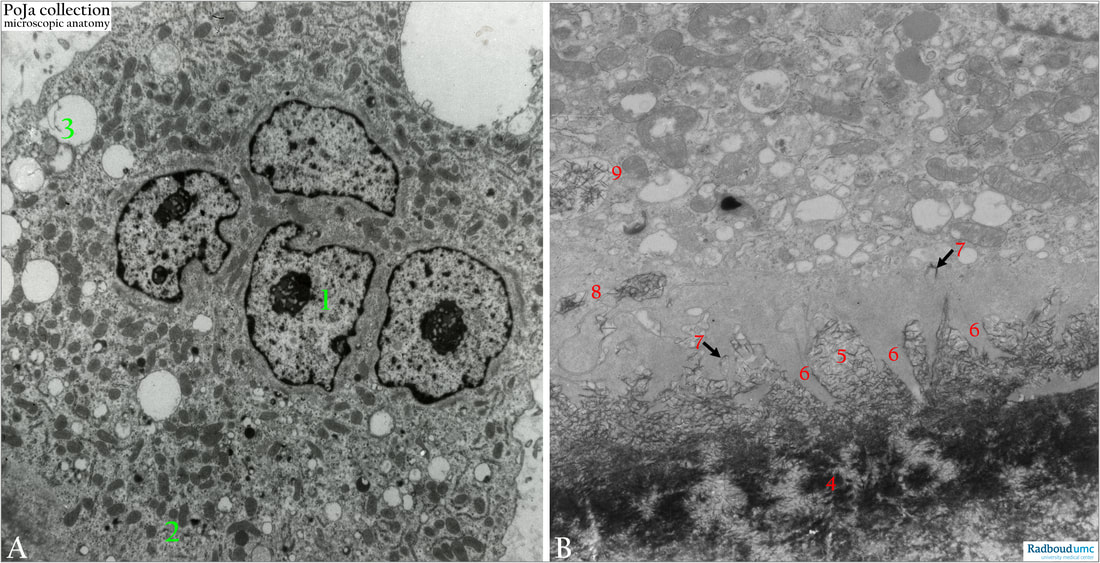 Description:
Electron micrographs of osteoclast, rabbit, desmal ossification.
(A): The cell is multinucleated (1), provided with a ruffled border (near to 2) and with numerous lysosomal structures (3).
(B): Detail of the ruffled border of the osteoclast and bone matrix.
(4): Heavy hydroxyapatite aggregates deposited outside the cell in the osteoid.
(5): Free  single hydroxyapatite (ha) crystals.
(6): Actin-rich podosome-like processes of the osteoclast.
(7): Arrows point to cross-section with a single ha crystal.
(8): Cross-sections through vacuoles including ha crystals at the border of the actin-riched podosomes.
(9): Section through vacuole showing ha crystals within the cytoplasm.

Background:
The presence of small hydroxyapatite aggregations between the podosomes (B) is explained by the process of endocytosis by the multinuclear osteoclast.
In order to resorb bone effectively osteoclasts attach themselves to the bone surface by specialised actin-rich podosomes. The latter enable the cells to form tight seals with the bone matrix and within these sealed zones cell membranes form deep infoldings the so-called ruffling of the membranes. In this way the cell surface area is increased to facilitate both the secretion of e.g. proteolytic enzymes, hydrochloric acid, cathepsin on to the bone surface as well as the endocytosis of degradation products and bone debris.

The peripheral part of the osteoclast cytoplasm that borders the area of the ruffled border: the clear zone (sealing zone). At this clear zone site the cell membrane exhibits adhesion molecules such as integrin extracellular receptors (vitronectin receptor, type I collagen receptor) responsible for a tight seal between plasma membrane and mineralised bone matrix.

Transport vesicles loaded with degraded bone material is endocytosed at the ruffled border contain distinct amount of TRAP involved in the breakdown of endocytotic material. Tartrate-resistant acid phosphatase (TRAP or TRAPase), also called acid phosphatase 5, tartrate resistant (ACP5), is a glycosylated monomeric metalloprotein enzyme. TRAP is secreted from the ruffled border, dephosphorylates osteopontin and allows osteoclast migration, and further resorption to occur.
Decalcification of the bone matrix starts through acidification of the bony surface. The osteoclast contains carbonic anhydrase I that produce carbonic acid, that dissociates into bicarbonate and a proton (H+). Using ATP-dependent proton pomps, these protons are transported through the ruffled border resulting in a low pH in the resorption groove.