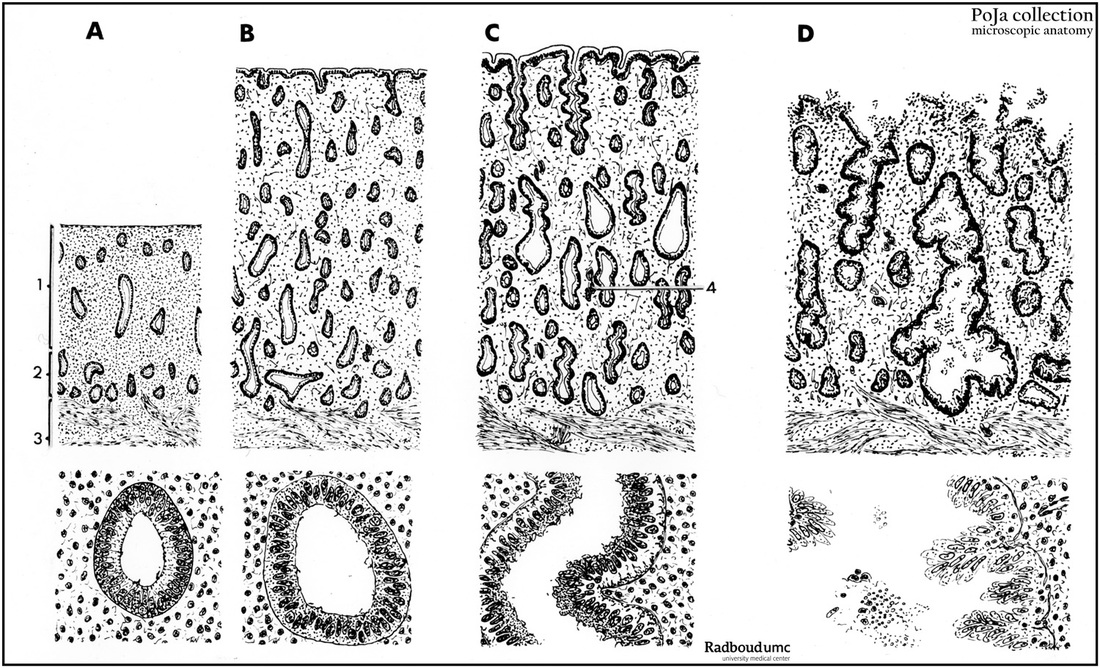 Description:
(A): Early proliferative period (magnification with objective x85 and x350).
(B): Late proliferative period (magnification with objective x85 and x350).
(C): Early secretory period (magnification with objective x85 and x350).
(D): Late secretory period up to the end (early start of desquamation) (magnification with objective x85 and x350).
Background:   The normal menstrual cycle lasts for between 21 and 34 days (mean 28)  and the first day of menstruation is defined as the first day of the cycle. Menstruation lasts for approximately 5 days after which the endometrium enters a growth phase (proliferative) which lasts for between 4 and 16 days. This transition occurs under the influence of estrogen secreted by the developing ovarian follicle. The menstrual cycle consists of three/four consecutive phases: a. menstrual (hemorrhagic) phase (4-5 days), b. proliferative phase (follicular or estrogenic phase) (5-14 days) subsequently the ovulation (about 14 days) and c. secretory phase (progestational or luteal phase) (14-27 days) followed by an ischemic phase (after 27-28 days). The cycle is a.o. controlled by the hypothalamic LH-RH (luteinizing hormone-releasing hormone) that stimulates hypophysic gonadotropic cells to produce FSH (follicle-stimulating hormone) and LH (luteinizing hormone). Estrogens stimulate the production of LH-RH while progesterone and prolactin (mammatrophic hormone) are inhibitory.

Ad A-B:  In the proliferative phase FSH stimulates a new ovarian follicle and the estrogen level increases. Distinct mitotic activity indicates regeneration of the epithelium of the uterine glands as well as of the stroma in the basal layer. Re-epithelialisation of the denuded endometrial surface and the formation of glandular structures is completed after 5-6 days post-menstruation and the thickness increases up to 1-2 mm. Thickening of the endometrium continues because uterine glands and the coiled arterioles become longer. The stroma is cellular and because stromal cells have little cytoplasm often presents a ‘naked-nuclei’ appearance. In early proliferative period the glands are short, straight and narrow within a compact proper lamina. In midproliferative period the glands are straight and longer, the epithelium is mitotically active and the proper lamina slightly edematous. During late proliferative period there is intense mitotic activity with rapid growing glands that become tortuous, with an edematous proper lamina. Macrophages, T cells and few B cells are always observed during all the cyclic phases.

Ad C-D: The secretory phase is influenced by FSH and LH (luteinizing hormone), both hormones stimulate the ovulation (about the 14th day), and the corpus luteum (controlled by LH) produces progesterone that stimulate the uterine glands. The early secretory phase lasts for about 4 days and between the 19th and 23th days the endometrium is in the midsecretory phase.The glands appear tortuous and on the 16th day the glandular cells show basal accumulation of glycogen and carbohydrate secretion. Endometrial stroma cells transform in so-called decidua cells (decidualisation), the coiled arterioles appear longer and form dense coils. This results in a thickened endometrium (up to 6-15 mm) that also becomes edematous. During the midsecretory phase the stroma is markedly edematous largely due to hormonally induced increase in the blood flow through as well as the hydrostatic pressure in the endometrial capillaries. In this period there is accumulation of glycogen basally in the epithelium of the glands with a so-called saw-toothed appearance. Stroma cells surrounding spiral arteries are mitotic active, enlarge and become decidua-like (decidualisation).  During the final days of the phase the “subnuclear vacuoles” with glycogen move to the apical portion of the glandular epithelium and secrete their contents into the lumen. After 23 days the endometrium enters the late secretory phase, glands secretion diminishes, glands tend to collaps and become increasingly tortuous. Stromal edema regresses and cells take a pre-decidual appearance (plump, abundant acidophilic cytoplasm and small nuclei, appearing firstly around spiral arteries Towards the end of the late secretory phase the stroma consists largely of sheets of predecidual cells infiltrated by neutrophilics and an influx of characteristic granulated lymphocytes (uNK-cells). The increase of neutrophilics as endometrium undergoes menstrual changes is accompagnied by necrosis, hemorrhage and glandular collaps.  The end of the menstrual cycle is indicated by the premenstrual or ischemic phase. If no fertilization occurs i.e. in the absence of hCG (human chorionic gonadotropin) normally produced by the trophoblast, the LH decreases and the involuting corpus luteum starts to degenerate due to decrease in steroid hormone blood level leads to an ischemic period (about 1 day) together with a shrinking of the functional layer of the myometrium and constriction of the coiled arteries/arterioles. This results in an ischemia and extravasation of erythrocytes in the endometrial stroma as well as the release of lysosomal enzymes. During the ischemic period the upper region of endometrial stroma periodic contraction of the artery (triggered by reduction of progesterone) at the straight-coiled segment interface reduces blood flow causing intermittent ischemia and the consequent hypoxia leads to necrosis of the functional layer and causes destruction of the functional layer of the endometrium. The detached and disrupted functional layer (consisting of glands and decidua-like cells) desquamates (menstrual hemorrhage), the menstrual flow longs for 3-6 days. Approximately ⅔ to ¾ of the thickness of the endometrium is shed in the uterine cavity (=menses). The basal layer is not affected because basal, non-hormone sensitive straight arteries provide independent blood supply. After 2-4 days the remaining layer starts to regenerate new tubular glands, stroma and vessels to re-establish the functional layer and proliferates in the consecutive phase of the cycle. If fertilization occurs trophoblastic produced hCG the corpus luteum persists, the LH and progresterone levels continues. All these events result in prevention of menstruation and stimulation of the decidual differentiation of the endometrial stroma (= decidua), even in extrauterine gravidity (e.g. ectopic pregnancy in the oviduct). The interglandular tissue increases and large amounts of macrophages, T cells and uNK cells are found between the large decidual cells. Extracellular matrix, growth factors, protease inhibitors e.a. are produced by the decidua cells to support the maternal blood supply, maintenance of the placenta and to modulate the degradation by the trophoblast (see also Scheme of Placental Tissues POJA-L1227).  The decidual tissues surrounding the implanted blastocyt receive distinctive names: (a). decidua basalis is the part between the blastocyst and the myometrium;  (b). decidua capsularis covers the blastocyst; (c). decidua parietalis is the remaining endometrium lining the non-occupied uterine cavity.