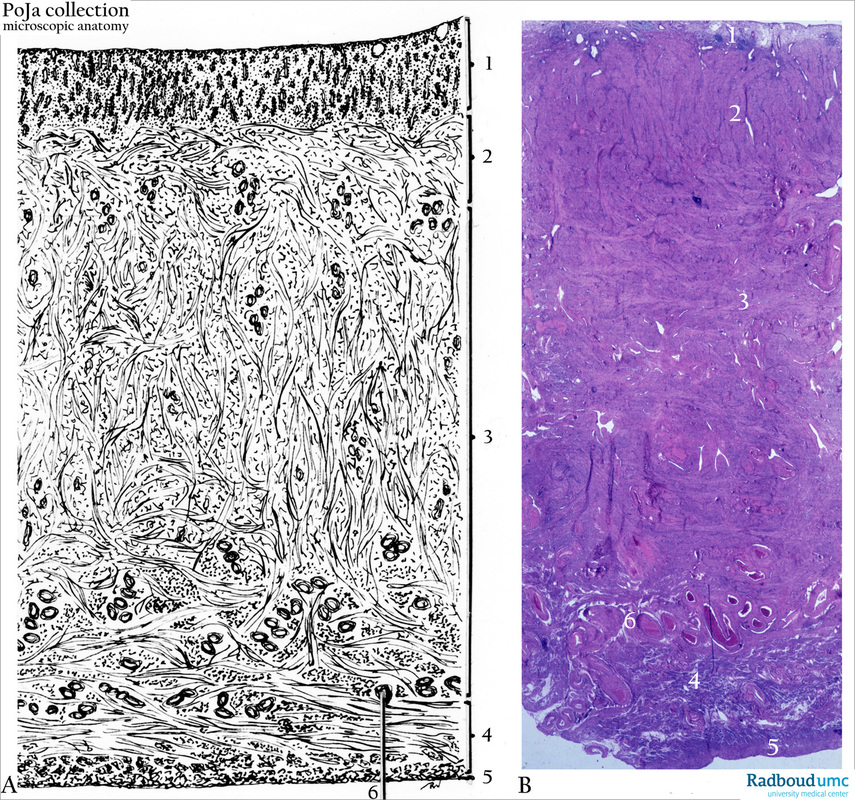 Background: The tunica mucosa or stroma of the endometrium is covered by a single lining of columnar secretory and ciliated cells. These cells create simple tubular glands downwards in the stroma and their bases reach beyond the endometrial-myometrial junction. The upper parts of the glands are called necks, are located in the stratum compactum and open into the uterine cavity. The deeper parts of the glands are located in the so-called stratum spongiosum and are  considered as the bodies of the glands.  The spongy structure (stratum spongiosum) is more pronounced in the secretory phase of the menstrual cycle (see POJA-L1223) as the glands enlarge and become tortuous while the embedding stroma remains loosely arranged. The compactum and spongiosum layers together are called stratum functionalis and that latter layer desquamates every menstrual cycle. The bottom parts of the glands are surrounded by compact stroma in a thin so-called basal layer (stratum basalis) that extents close to the junction with the myometrium. This basal layer never desquamates and thus functions as regenerative layer with enhanced mitotic activity. The stroma between the glands is considered as a kind of a specialized proper lamina being highly vascularized, and rich in young stroma cells. The especially coiled arterioles are build as the thinnest ascending branches of the arcuate arteries (derived from the uterine artery). The tunica muscularis or myometrium is composed of helically arranged thick smooth muscle bundles that are arranged in three ill-defined layers: the internal layer contains circularly and longitudinally arranged smooth muscles. The thick middle layer is formed by a three-dimensional network of oblique and circular smooth muscle bundles. An extensive vascular network is present in between the muscle bundles, hence the name stratum vasculare. The outer layer consists of thin longitudinally arranged smooth muscle bundles. Recently a new cell-type has been described the so-called myometrial interstitial Cajal-like cells. These cells are involved in cell signaling, act as steroid sensors and excitatory regulators of smooth muscle motility. The tunica serosa or perimetrium is the peritoneal lining of the uterus. The blood vessel system is well adapted to cyclic changes and pregnancy. The uterine artery branches in arcuate arteries which penetrate into the middle layer of the myometrium creating various arterial plexus. These muscular arteries show a tortuous course that is adaptable to distention of the gravid uterus. They contain a thick tunica media which is engaged in labour contraction. At the endometrial-myometrial junction the plexus gives rise to straight radial arterioles that penetrate for a short distance vertically into the stroma (supplying the basal layer), then they become corkscrew-shaped and are indicated as coiled (spiral) arterioles (supplying the functional layer), subsequently these arterioles terminate in capillary tufts under the epithelium. Coiled arterioles and capillaries as part of the stratum functionalis are by exception hormone-sensitive, degenerate and regenerate after each cycle.