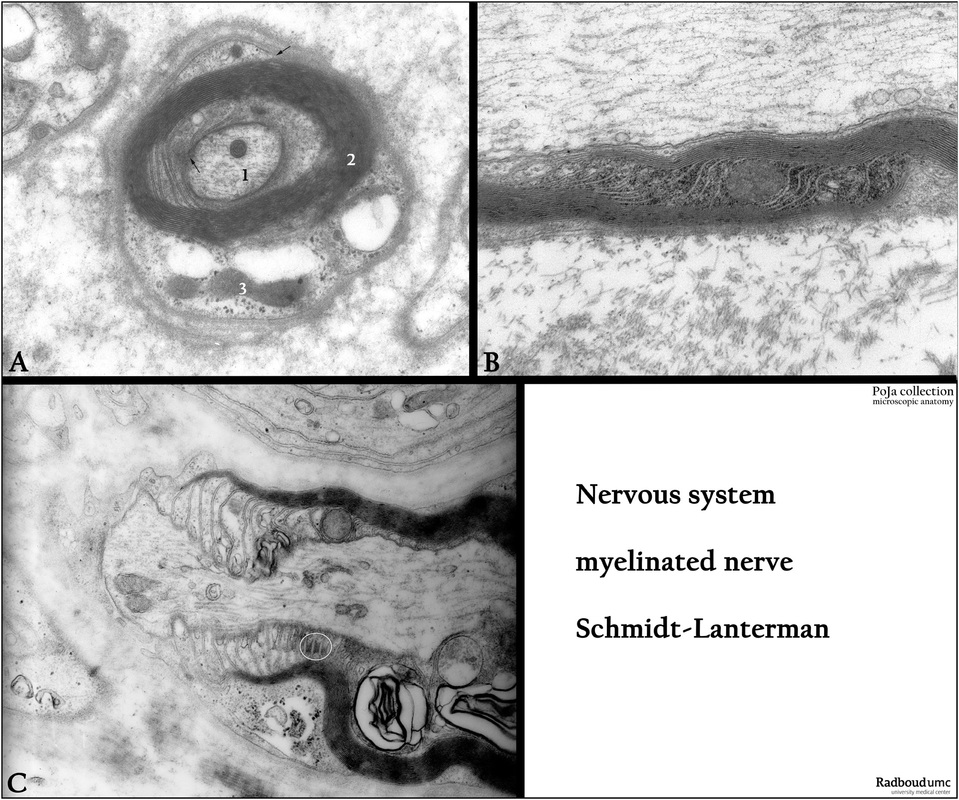 (B): Electron micrograph of a longitudinal section through the paranodal region of a myelinated nerve, i.e. Schmidt-Lanterman incisures (or clefts), rat. These incisures are funnel-shaped and spirals through the compact myelin layers and provide a short diffusion pathway between the outer and the inner Schwann cell collars. They are also involved in the growth and function of compact myelin. High concentrations of spectrin and actin are localized in the cleft most likely forming a filamentous skeleton for stability and elasticity of these structures.

(C): Electron micrograph of a longitudinal section through the paranodal region, with adherens junctions (oval frame in C) in the Schmidt-Lanterman incisures, rat.
​
Background: Myelin is structurally and biochemically divided in compact and non-compact myelin. The first one forms many layers. They are formed by the major dense lines about 15 nm (due to fusion of the inner leaflets of the Schwann cell membranes) that alternate with two ca. 2 nm intraperiod lines (or minor dense lines corresponding to outer leaflets of Schwann cell membranes  which remain closely apposed only separated by a narrow extracellular space). Only remnants of cytoplasm remain in the myelin. Non-compact myelin is found in the cytoplasm of at the nodes of Ranvier, paranodal loops, Schmidt-Lanterman incisures, and the inner and outer mesaxon. In these places there is much more cytoplasm present between the membrane lamellae. In these areas epithelial-like junctions are found such as tight, gap and adherens junctions. As they are found between their own membrane lamellae of the same cell, they are termed autotypic junctions and appear during the formation of myelin. They contain E-cadherin, β-catenin, connexins, claudins and others such as MUPP, Par-3, PATJ, ZO-1, -2. Heterotypic septate-like junctions are formed between the axon and the paranodal loops of the myelinating Schwann cell. All these structures are thought to be involved in both mechanical stabilization, regulation of conductivity and polarized vesicle transport and protein trafficking between Schwann cells and nerve cells