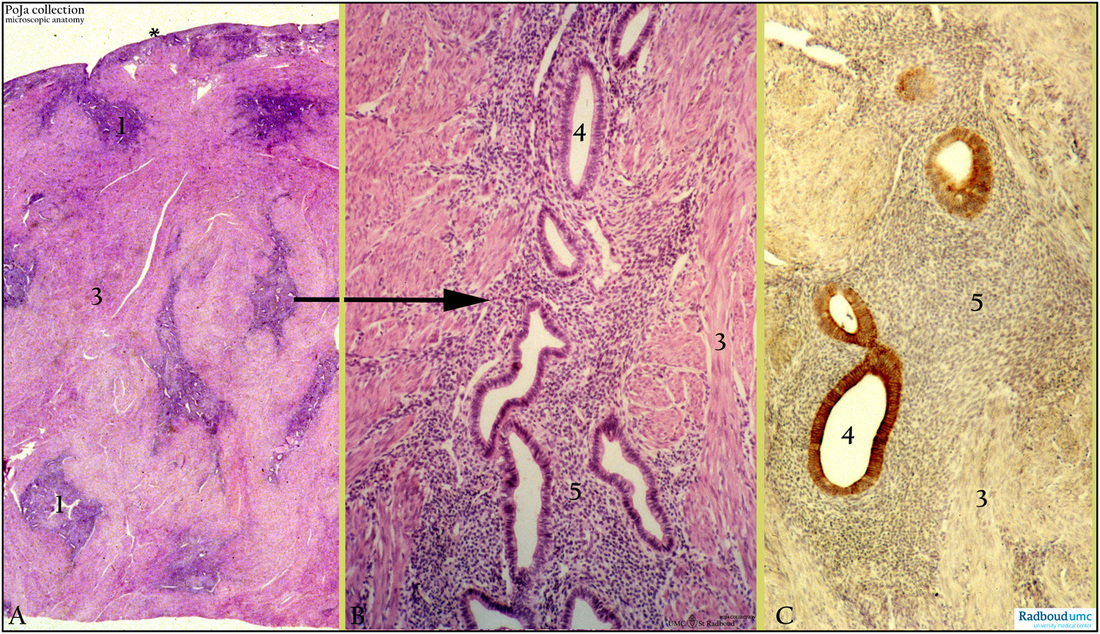 (A): Survey of part of uterus with thin endometrium (*). Endometriotic foci (1)  are distributed in deep as well as superficial myometrium (3).

Clinical background endometriosis:  Endometriosis interna or adenomyosis (70% of all cases of endometriosis) is thought to be generated by penetration of endometrial glands into the myometrium. There is often still contact between the endometriotic foci within the myometrium with the lining endometrium of the uterus. In contrast to pelvic endometriose generally these lesions do not respond on hormonal stimulation. Probably they arise out of the non-functioning basal stratum of the genuine endometrium.

Endometriosis is characterized by the ectopic growth of endometrial tissue. Histologically endometrium-like glands and stroma are found located outside the uterus. Extrapelvic endometriosis refers to ectopic implants in the digestive tract, urinary system, lungs, skin, brain and striated muscles. The disease is chronic, invasive and metastasizing but not neoplastic. It is an estrogen-dependent disease and therefore affects women of reproductive age (5-10%). The disorder is associated with infertility and pelvic pain. The ectopic endometrial foci function normally under hormonal stimulation resulting in accumulation of blood tissue remnants (with storage of iron and debris) in cystic cavities with a fibrous reaction of the cyste wall. This might lead to extensive fibrosis within the organs or between the different pelvic organs. These blood-filled cystic structures are called chocolate-cysts. There are several theories about the origin of endometriosis: (1) Retrograde menstruation (1927, Sampson);  (2) Lymphatic and vascular spread; (3) Coelomic metaplasia i.e. abnormal differentiation of duct of Müller (a differentiation of the coelomic epithelium);  (3) Immunogenetic defects a.o. aberrant overexpression of factor SF-1 that activates aromatase to convert steroids to estrogens. Due to the feed-back system of increased estrogens prostaglandin E2 production is stimulated resulting in increased aromatase activity. Endometriosis is now assumed as a condition in which ectopic endometrial cells exhibit abnormal proliferative and deregulated apoptosis. In retrograde menstruation detached endometrial cells of the menstrual efflux provide the cellular source for endometriotic lesion formation. It is suggested that normally endometrial cells do not survive at ectopic locations because of apoptosis. Decreased apoptosis may lead to ectopic survival and implantation resulting in the development of endometriosis. Increased expression of anti-apoptotic factors and cytokinins play a role.