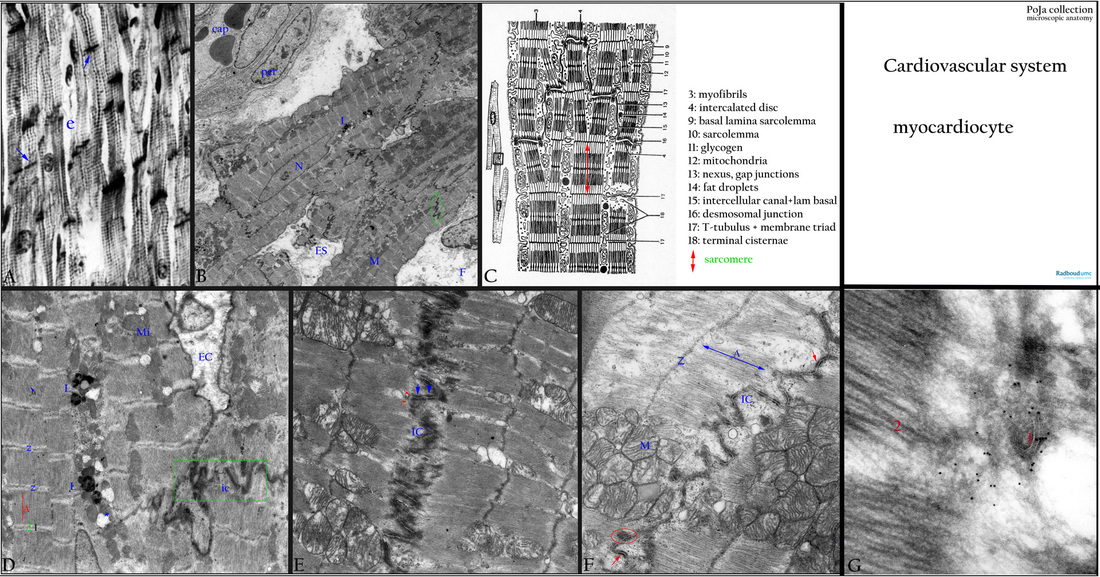 (B): Heart ventricle, cardiocytes, EM, rat. Survey of about six anastomosing myocardiocytes with left a capillary (cap) with erythrocytes and surrounded by pericyte (per). (N) Central nucleus of a cardiocyte with paranuclearly small lipofuscin granules (L) and mitochondria (M). One of several intercalated disks is encircled. (ES) extracellular space. (F) A damaged fibroblast. Transverse tubules of the T-system are present forming a small triad with terminal endings of the sarcoplasmic reticulum at the level of each Z-line (not visible in this survey; the reader is referred to Skeletal Muscle in section Nervous Tissue).

(C): Scheme EM cardiocyte with sarcomere configuration of the myofibrils.

(E): Heart ventricle, cardiocytes, EM, human. Two cells linked together by an intercalated disk (IC), the disk is a transverse structure that occurs at the level of the Z-lines and represents an area where the cardiocytes and their branches meet end-to-end. The intercalated disk is differentiated into zones of desmosome (macula adhaerens), intermediate junction (fascia adhaerens) (thick blue arrows) and (thin red arrow) gap- junction (nexus).

Background: Laterally the junctions of the disk are not in register but arranged as steps of a ‘staircase’. In certain areas the surface of apposed cell membranes parallels the long axis of the cell. Here longer stretches of gap-junctions (or nexuses) will be present (vertical part of the steps in the ‘staircase’). As a specialized junctional complex the intercalated disks are involved in cell cohesion, in transmitting tension and contraction impulses form cell to cell. With ageing they become more complex and increase in amount.

(G): Heart ventricle, cardiocyte, immune electron microscopy, mouse. Ultra-cryo-section shows black dots of gold-labeled desmin localized in the region of the macula adherens (1) as well as in the cytoskeletal structures near the thick myosin filaments (2).