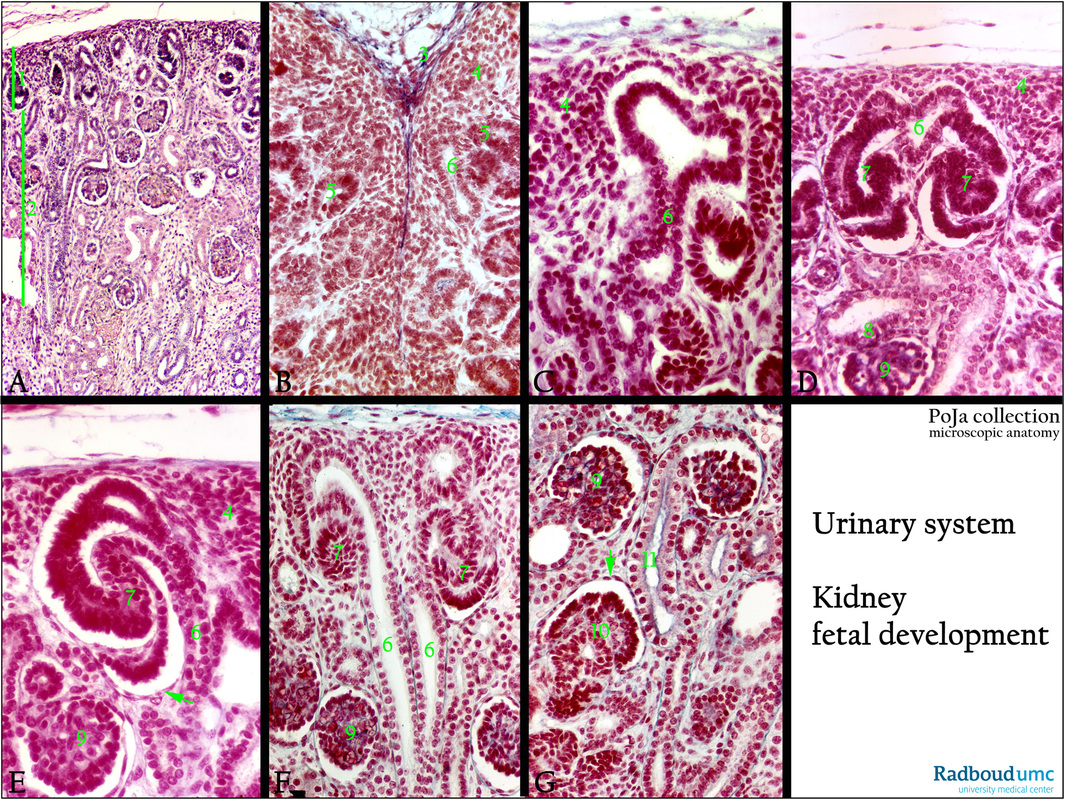 Description:
(A, B - G): Survey and details of kidney cortex,  stain hematoxylin eosin in (A) and (B - G) stain Azan, human fetus.
(A): Shows the nephrogenic zone (bar 1) and below the differentiating nephrons (bar 2).

(C): Cap mesenchyme (4). (6) Ureteric tip (later on collecting duct) with the T-shaped structure and its ampullae.

Background: 1) Metanephric nephron formation (in rodents):
-Under the influence of molecular markers a.o. Wnt9b, Pax8, Notch2  the following processes take place.
-Near the cloaca the nephric duct forms an outgrowth the uteric bud that grows into the metanephric mesenchyme
i.e. a population of specialized cells of the nephrogenic cord.
-Branching of the ureteric bud as well as formation of nephrons from the metanephric mesenchyme occur due to reciprocal inductive signalling between the bud and mesenchyme.
-Later on the ureteric bud branches and forms a T-shaped structure.
-Each bud is surrounded by a cap of condensed metanephric mesenchyme (cap mesenchyme).
​-Cap mesenchyme cells form pretubular aggregates and the latter subsequently are converted into epithelial vesicles or renal vesicles
on either side of each ureteric bud tip.
-Growing renal vesicles result in the formation of comma- and S-shaped bodies during tubulogenesis.
-S-shaped bodies form most of the mature nephrons and fuse to ureteric bud branches which become future collecting ducts.
-Then blood vessel progenitors (angioblasts) invade the proximal cleft of the S-shaped body contributing to the vascular component of
the glomerulus.
-The distal part of the S-shaped body fuses with the collecting duct.

2) In humans nephrogenesis only occurs before birth but nephron maturation continues postnatally.
Generally there are four stages in human nephron development:
a) 13-19 weeks second trimester V-stage (Vesicle stage) is at its highest, after 20 weeks the V-stage proportion decreases gradually.
b) 20-24 weeks second trimester the proportion of the S-stage (S-shaped body stage) is at its maximum and epithelial and mesangial                      cells firstly appear during the stage.
c) 25-29 weeks third semester the C-stage (Capillary loop stage) proportion is high and maturation of endothelial cells starts.
d) 1-6 months infants, neonatal and postnatal M-stage (Maturation stage).