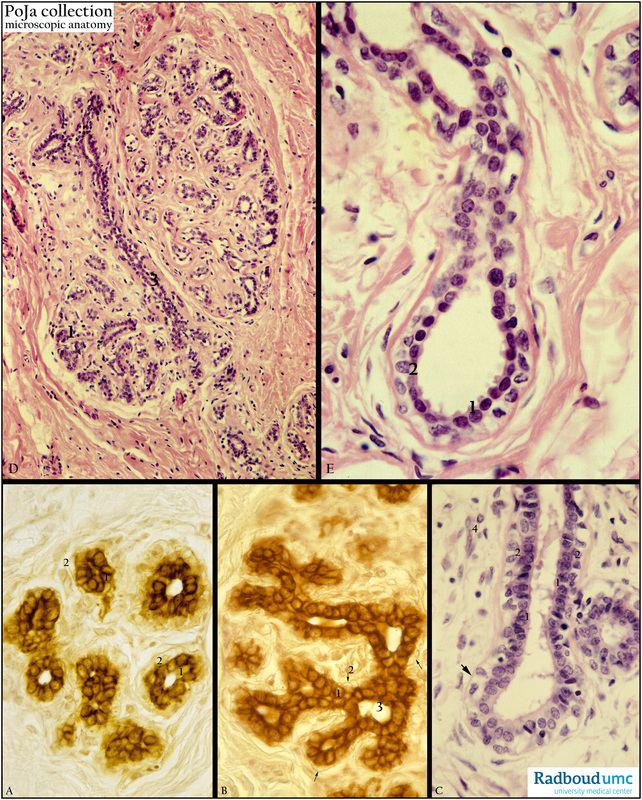 Background: The mammary gland develops as a down growth of the epidermis and may be considered as a modified apocrine, tubuloalveolar (tubuloacinar) sweat gland. The inactive (resting) human mammary gland is characterized by a parenchyma of branching network of ducts ending in clusters of small ductules that become tubuloalveoli during pregnancy. The epithelial lining  consists of a luminal and myoepithelial lineage i.e. luminal cuboidal or columnar epithelial cells on a discontinuous basal layer of myoepithelial cells. The luminal lineage is subdivided into ductular luminal cells and alveolar luminal cells that constitute the alveolar units (pregnancy) and are involved in the production of milk.  In contrast myoepithelial cells are specialized contractile cells with epithelial characteristics (specific cytokeratin filaments) adjacent to the basement membrane. These cells are 10-20 times more sensitive to oxytocin than myometrial smooth muscle cells. Contraction of myoepithelial cells contributes to the ejection of milk.
The nonepithelial or stromal elements surrounding the parenchyma comprise fibroblasts, macrophages, endothelial cells and adipocytes and are collectively referred to as the mammary fat pad (Neville et al. 1998). The gland contains about 10-20 separate lobes, each of them consists of several ovoid-shaped lobules. Each lobe is associated with a lactiferous sinus by a lactiferous duct (segmental duct) and a branch (subsegmental duct) of this duct is continuous with an extralobular duct of a lobule. An extralobular terminal duct and its ramifying ductules comprise a lobule and compose the terminal ductal lobular unit or TDLU (functional unit).