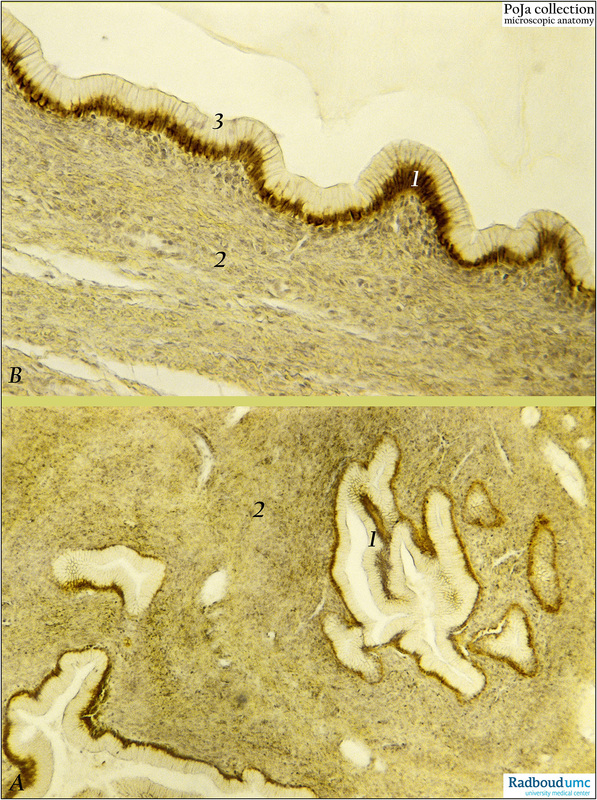 (A): Complex branching mucous tubules (1) are CK-7-positive and are supported by (light yellow-stained) negative connective tissue (2).

Background:  Histogenetically it is assumed that a majority of epithelial tumors of the ovary is derived from the ovarian serosa. This lining is the equivalent of the embryonic coelomic epithelium in adulthood. Embryologically the coelomic epithelium give rise to the müllerian epithelium (ducts of Müller) and its derivates are the fallopian tube lining (tubal pathway), endometrial lining (endometrial pathway) and endocervical glands lining (endocervical pathway). The ovarian surface epithelium contains undifferentiated cells that still are latent to differentiate along similar embryonic pathways. In this way a tumor derived from these cells will differentiate in similar way. It appears that mucinous tumors are differentiated along the endocervical pathway.  Generally benign mucinous tumors are cystic and form mucinous unilateral cystadenomas, mostly between 10 and 30 cm. In several cases, they can expand and fill up the whole abdomen. The cysts are often multilocular and show mucoid content. The locules have fibrous tissue walls and are lined by a single layer of mucus-producing cells almost identical to the epithelium of the endocervix. Cytokeratin 7 is generally expressed by normal simple lining epithelia as well as by the epithelium of most mucous or serous glands.  Neoplasms often preserve this common reactivity for CK7. Exceptions of simple lining epithelium in human that do not express over all CK7 are a.o. lining cells (colonocytes) of large intestine and prostate.