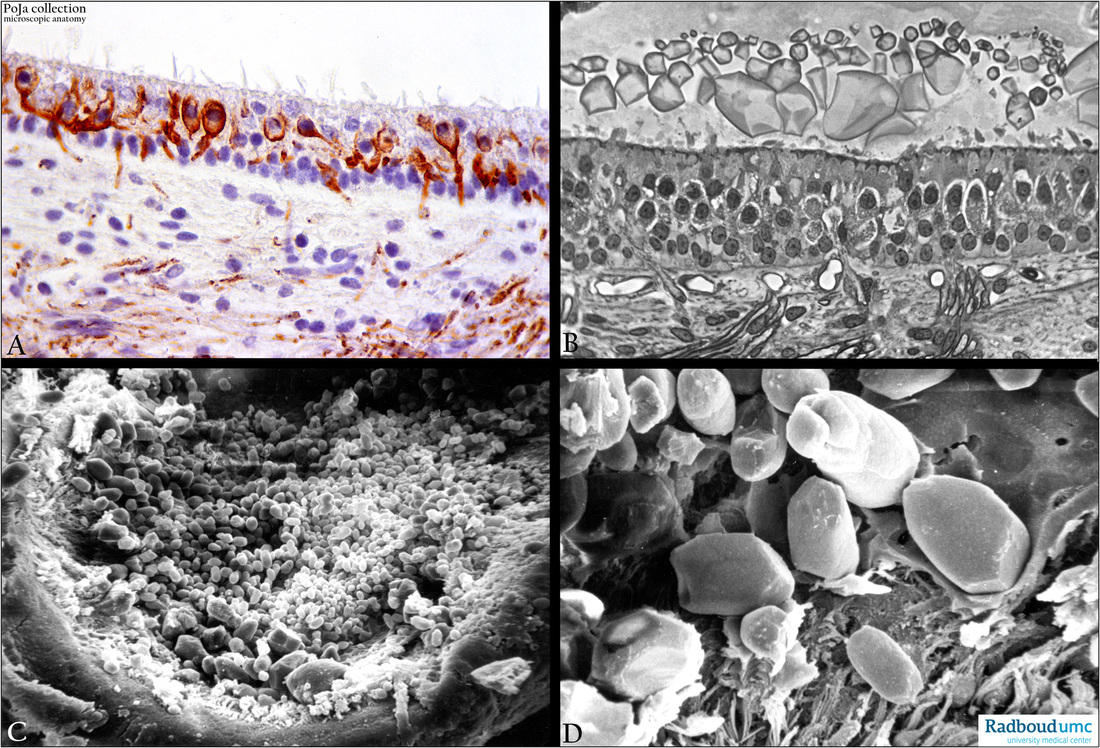 Description:
(A): Macula, immunoperoxidase staining with AEC and antibodies against neurofilament, 4d postnatal rat. The fine terminal individual saccular nerve fibres run up to the base of the macula sacculi, penetrate into the neuroepithelium and form afferent calyces around the base of the sensory cells.

(B): Macula sacculi, stain toluidine blue semi-thin plastic section (phase contrast, black-white), rat. Otoconia (or statoconia; in fish called otoliths) and at the base of the macula myelinated nerve fibres losing their myelin (denser stained) upon entering into the neuroepithelium.

(C, D): Otoconia (or statoconia) of different sizes, scanning electron micrographs, rat. The fibrogelatinous membrane is shrinked due to the preparation procedures and is partly recognisable at the bottom of the characteristic barrel-shaped larger-sized otoconia and faceted
ends (D).

Background:
The otolithic organs consist of a saccule and an utricle, two gravity receptor organs which respond to linear acceleration and gravity.
The saccule is the portion of the membranous labyrinth continuous via the ductus reunions with the base of the membranous cochlear duct. The macula of the saccule is situated vertically on the wall of the saccule and is attached to the periost of the bony labyrinth.
On the other hand the utricle is the portion of the membranous labyrinth into which all semicircular canals open, it possesses also an identical macula but now situated horizontally on the floor of the utricle and attached on the wall of the membranous labyrinth.
A macula consists of a small sensory receptor area with type I/type II hair cells and supporting cells covered by a gelatinous glycoprotein layer. Each hair cell has about 40-70 stereocilia fixed in the apical cuticular plate as well as one long, free flexible kinocilium and a basal body in the apical cytoplasm. Within a bundle of stereocilia shorter stereocilia are connected to their taller neighbours by protein fibres called tip-links an important component of the mechanotransduction apparatus.
The stereociliary tips are embedded in the so-called otolithic membrane, a jelly-like otoconia-containing substance that contains glycoproteins and a.o. alpha- and beta-tectorin proteins. Otoconia contain an inner core made of otoconins (glycoproteins) and proteoglycans while the outer surface mostly consists of precipitated CaCO3. They add to the density of the membrane contributing in sensing motion and gravity. Under pressure the cuticular-fixed stereocilia move toward the flexible kinocilium that will sink into the apical cytoplasm. This leads to ion channel opening resulting in a depolarisation (=excitation).
In a reserve order if the stereocilia move away from the kinocilium the result is hyperpolarisation (=inhibition).
Moving upwards from a stationary position (e.g. elevator): the otolithic membrane of the (vertical lying) macula lags briefly behind in the endolymph and the hair cells are pulled downward. When the moving stops for a short while the otolithic membrane keeps on moving and the hair cells are bended upward. In this way signals from the macula sacculi to the brain result in the interpretation of vertical acceleration.
The macula utriculi detects the horizontal tilting of the head whereas the macula sacculi is involved in detecting the vertical tilt of the head. In the upright position of the head the otolith membrane lies directly on all hair cells and there will be minimum stimulation.
After tilting the head the stereocilia are bent due to the weight of the otolithic membrane resulting in hair cells stimulation.
Any different orientation of the head results in a combined stimulation on utricles and saccules in both inner ears.
The brain interprets the overall orientation of the head by comparing input from both ears, other inputs from the neck stretch receptors
as well as from the eyes.