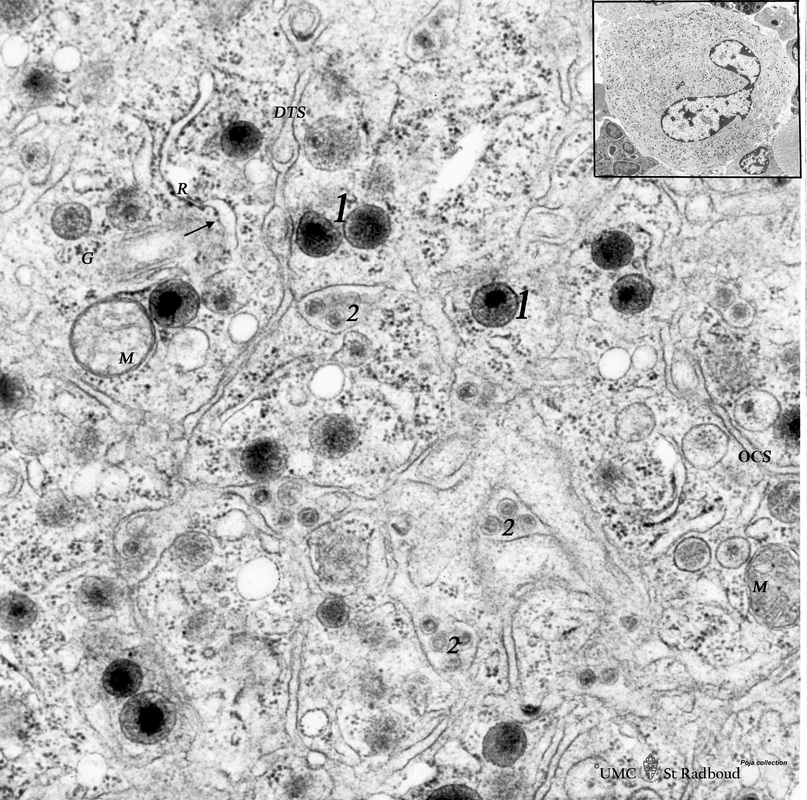 A detail of the cytoplasm of a megakaryocyte (see inset) demonstrates distinctly a part of the intermediate zone subdivided by an interconnected tubular system (so-called demarcation membrane system or open canalicular system: OCS) that is in continuity with the cell surface.
The cytoplasm contains few mitochondria (M), glycogen (G), free ribosomes, rough endoplasmic reticulum (R, and ↓), vacuoles and membrane-bound granules. The majority of the granules in stage of development is composed of the homogeneous electron-grey ones (1) with a dark centre (a-granula) variable in size. They contain among others platelet-derived growth factor, factor VIII (von Willebrand), thrombospondin, fibronectin, fibrinogen.

(2): Indicate rodent virus particles that migrate along the OCS.

Background: Platelets are derived from the cytoplasmic fragments formed by the intricate demarcation membrane system. The production of platelets occurs after a long thin cytoplasmic cell extension protrudes through an endothelial fenestra resulting in the release of platelet ribbons or individual platelets.
In a clotting process due to adherence to collagen exposed receptors for factor VIII the platelets change their shape becoming spherical and develop numerous long thin cytoplasmic processes that interlinked with other platelets. The granular contents are released via the open canalicular system and the clotting cascade is activated due to adhesion of other platelets under the influence of ADP, calcium ions etc.