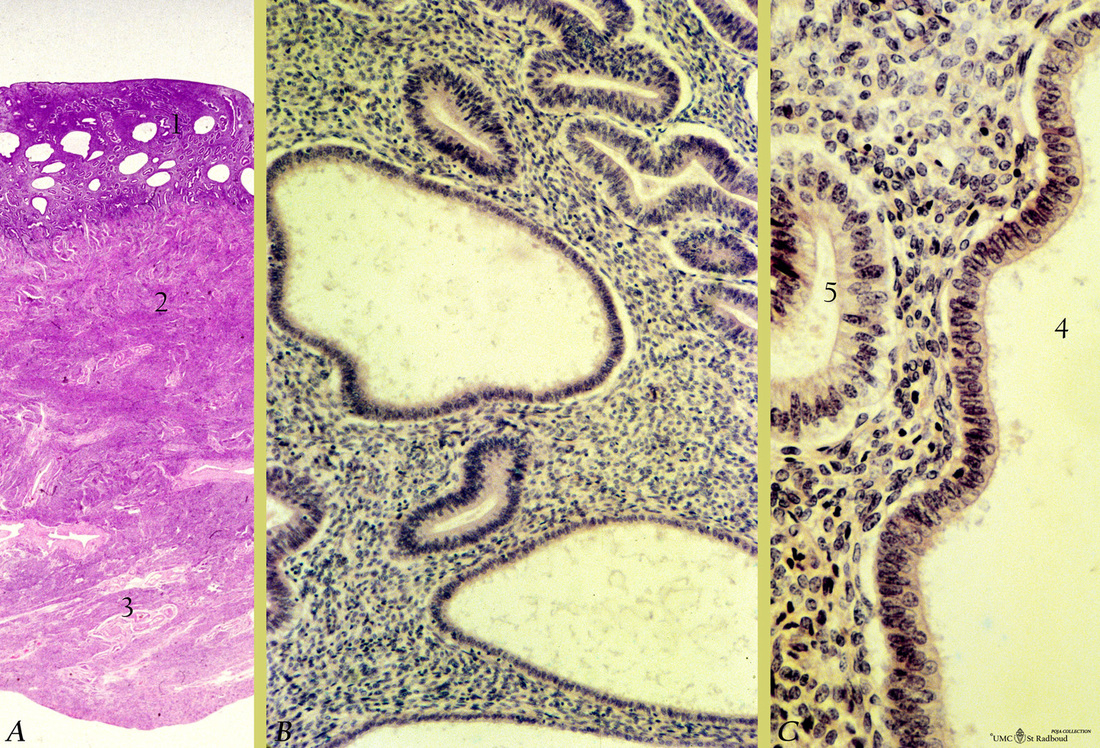 (B): Normal appearing endometrial glands and two cystic enlarged glands. In all lumina some proteinaceous debris is present and the stroma shows a high cellularity with scattered mitoses.

(C): (4) lumen of a cystic gland with cuboidal lining; (5) normal endometrial gland with cylindrical lining. There are no signs of nuclear- and cell atypia nor proliferations of aberrant glandular structures. (Partly by courtesy of  G. P. Vooijs MD PhD, former Head of the Department of  Pathology, Radboud university medical center, Nijmegen, The Netherlands).

Clinical background: Hyperplasia of the endometrium is the result of an increased proliferation of the endometrium due to the persistent influence and effect of continuous production of oestrogens for example due to a persistent follicle cyste, polycystic ovarium syndrome, hyperthecosis or exogenous administration of oestrogens.  In the case of a persisting follicle ovulation is absent and there is no corpus luteum and hence no or minor production of progesterone. There is no secretion phase of the endometrium because due to the continuous stimulation by oestrogens there will be a persistence of the proliferative phase. The macroscopic aspects of normal  endometrium and hyperplastic ones appear to be identical, but the latter show more focal or diffuse endometrial thickening.  Curettement results in increased amount of endomtrial tissue. Microscopically  three types of hyperplasia can be discerned:
Keywords/Mesh: female reproductive organs, uterus, cysts, endometrial hyperplasia, genitalia, female., menopause, hyperplasia, histology, POJA collection
return to uterus-vagina images