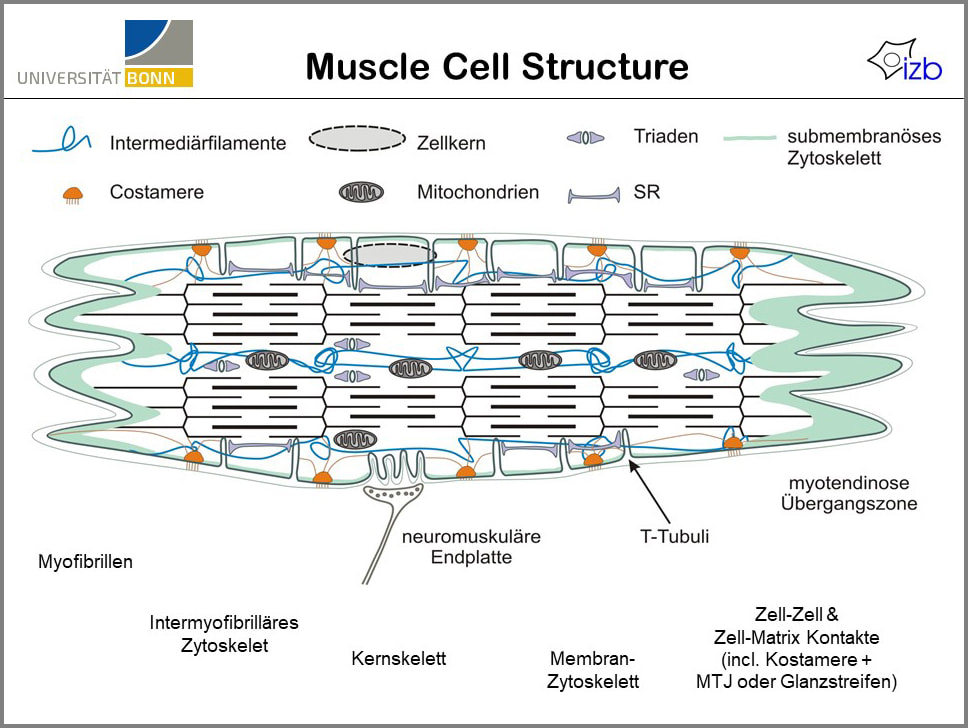 Title:  Scheme of the structure of a striated muscle cell

Description:
The muscle cell or muscle fibre of skeletal muscles has a contractable cytoskeleton that consists of thick filaments (myosin) and thin filaments (actin) with a sliding mechanism by which the cell can contract or shorten and relax again.
The contraction complex is anchored to the sarcolemma and the extracellular matrix (ECM) by a complex of (glyco)proteins assembled in the name “costamere” functioning to transduce the contraction to neighbouring cells, tendon and bone.
The contraction is initiated by stimulus of nerve fibres that end on the surface of the muscle cell on specialised contact places, synaptic clefts of endplate.
In the synaptic clefts transmitter substances like acetylcholine are released which trigger the muscle cell to contract.
The muscle cell contains all conventional cell organelles such as nuclei, mitochondria, RER (rough endoplasmic reticulum) but also a specialised SER (smooth endoplasmic reticulum) that functions to store and release Ca++ ions upon nerve triggering via the T-tubules (Triad system).

Muscle cell excitation, contraction and relaxation:
Following a nerve signal the neurotransmitter acetylcholine is released from the presynaptic vesicles into the neuromuscular junction or synaptic cleft where they bind to the ACH-receptors. This causes depolarisation of the muscle cell membrane, i.e., a sudden influx of Na+ ions in the muscle cell. The resulting action potential is conveyed to the interior of the cell via a series of membranous channels or invaginations (the transverse tubular system or T tubules) that protrude deeply to the surroundings of the myofibrils. The action potential in the sarcolemma opens Ca2+ channels in the terminal cisternae of the sarcoplasmic reticulum (SR). The released Ca2+ is bound to troponin C as part of the thin filaments. Now the Ca sets free the troponin-tropomyosin-complex and the myosin heads can bind to the actin. The resulting myosin-crossbridge facilitates via ATP hydrolysis the loosening of the myosin-head and subsequent move of the myosin head to the next actin-myosin crossbridge site (=contraction). As soon as the action potential stops, membrane pumps (Ca2+ ATPase) in the sarcoplasmic reticulum pump the Ca2+ ions back into the sarcoplasmic reticulum rapidly and stop contraction.  The close association of T tubules and SR form 3 tubules in cross section (triad). The triad surrounds every myofibril, two triads in each sarcomere.
During relaxation, when Ca+ ions have been pumped back to the SR, the filaments slide back in the original opposite direction. At that time the acetylcholine in the synaptic cleft has been hydrolysed in acetyl and choline by the acetylcholine esterase, and the stimulus has been removed.

The costamere is an assembly of proteins and glycoproteins that connect the sarcomere contraction unit to the sarcolemma or cell membrane. Two major complexes are considered: The costameric DGC and IVT complexes transduce the force of the actin-myosin contraction system through the sarcolemma to the ECM and further.
Any dysfunction in these two complexes of the costameres contributes to muscular diseases.