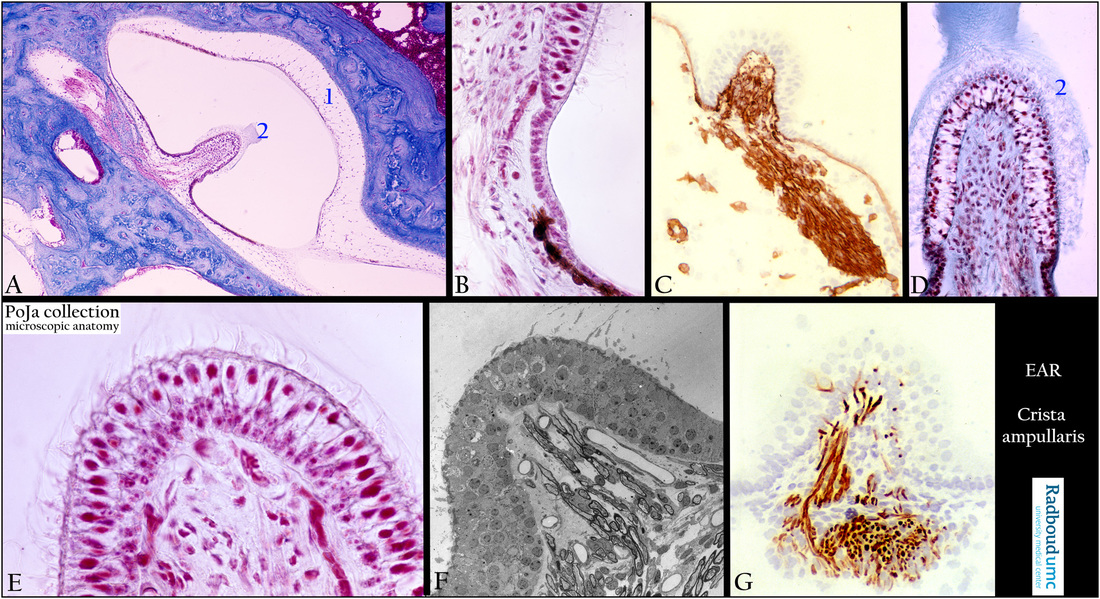 Description:
(A): Survey ampulla with crista ampullaris, stain Azan, guinea pig. The so-called semicircular canals are situated in three different planes and involved in angular acceleration i.e. a change in the rate of head rotation. The canals are filled with endolymph, each canal opens into the utricle and shows a dilated sac at one end, the so-called ampulla.
Within the ampulla hair cells with supporting cells are referred as the crista ampullaris. The cupula is a jelly-like membrane that contains a.o. otogelin and extends from the crista ampullaris up to the roof of the ampulla.
In the adulthood the bony labyrinth is characterised by cross-sections of the Haversian systems or osteons. In this dilated part (ampulla)
of a semicircular canal myelinated nerve fibres (branch of the vestibular nerve) penetrate (1) the vascularised loose connective tissue (perilymphatic tissue) up to the bottom of the ridge (crista ampullaris) where supporting and sensory cells (neuroepithelium) are located. Due to histological preparation procedures (2) remnants of the cupula are still partly present, in vivo the cupula is an elongated jelly-like structure reaching up to the opposite site. At the base of the crista  flattened cells of the planum semilunatum continue in the regular cellular lining of the membranous semicircular canal.

Background 1:
Otoancorin is located at the interface between the apical surface of the inner ear sensory epithelia and their overlying acellular gels.
In the vestibule otoancorin is present on the apical surface of nonsensory cells where they contact the cupulae.
It is proposed that otoancorin ensures the attachment of acellular gels to the apical surface of the underlying non-sensory cells.
Otogelin is a specific protein synthesized by non-sensory cells located underneath the acellular membranes  as in the case of the cupula of the semicircular canals.
Within the cupula stereocilia of the hair cells are embedded. On turning the head the duct (canal) rotates but inside the duct endolymph lags behind. By pushing of the endolymph against the cupula the stereocilia are bent and thus stimulate the hair cells. Endolymph in the corresponding semicircular duct on the opposite side of the head moves in the opposite direction.
The semicircular canals work in pairs to detect head movements. A turn of the head excites the receptors in one ampulla and inhibits receptors in the ampulla on the other side. After about 25-30 seconds continuous rotation the endolymph catches up with the movement of the canal and stimulation of the hair cells comes to an end.

(B): Planum semilunatum of crista ampullaris, stain Azan, guinea pig. At the top the sensory hair cells and supporting cells and downwards toward the base of the crista the transition into smaller isoprismatic non-sensitive epithelial cells  (planum semilunatum).  Note brown-pigmented melanocytes.

(D, E): Crista ampullaris, stain Azan, guinea pig. Note the cilia on top of the hair cells embedded within the jelly-like cupula (2).
Nuclei of supporting cells are found basally close to the basement membrane as  boundary of the proper lamina.

(F): Survey crista ampullaris, electron micrograph, rat (by courtesy of E. Tonnaer PhD, Department of Otorhinolaryngology, Radboud university medical center, Nijmegen, The Netherlands).  Within the lamina propria (perilymphatic tissue) myelinated nerve fibres and capillaries end up around the base of the neuroepithelial cells. Basally the nuclei of the supporting cells, higher within the epithelium the nuclei of the sensory cells, often vacuolated.  Several bundles of cilia consisting of stereocilia arise out of small dense cuticular plates at
the top of the hair cells as well as a long free single kinocilium.
The fluffy cupular material is dissolved due to preparation procedures.

(G): Crista ampullaris, immunoperoxidase staining with AEC and antibodies against neurofilament, 4d postnatal rat. See also (F); the afferent nerve fibres and terminals run up to the base of the crista. They penetrate into the neuroepithelium via spaces between supporting cells and also contain the neurotransmitters aspartate and glutamate.

Background 2:
See sections about he maculae and compare similar mechanical actions.
A crista ampullaris consists of a small sensory receptor area with type I/type II hair cells and supporting cells covered by a gelatinous glycoprotein structure the so-called cupula.
Type I hair cells are localised at the ridge of the crista and type II hair cells are found basally at the crista.
The nerve fibres form afferent calyces of sensory dendrites around the base of type I hair cells where synaptic ribbons are found.
Nerve endings in contact with type II hair cells only show simple terminal boutons (only small dendritic endings at the base).
Each hair cell has about 40-70 stereocilia fixed in the apical cuticular plate as well as one long free flexible kinocilium with a basal body within the apical cytoplasm. The stereociliary tips are embedded in the so-called glycoproteinous cupula. The stereocilia of the hair cells are bent by a mechanical stimulus e.g. the weight of the jelly-like cupula. Thin thread–like links connect to the adjacent longer cilium.
The tip link is stretched by bending the hair cells resulting in an influx of K+ ions and thus the generation of neural impulses in the vestibulocochlear (VIII) nerve. When the stereocilia are bent away from the kinocilium the plasma membrane of the hair cell hyperpolarises resulting in decrease of afferent activity i.e. no stimulation of the afferent nerve fibres (inhibition).
But in reverse order when the stereocilia bend toward the kinocilium the result is a depolarised cell membrane of the hair cell with an increase in afferent activity due to stimulation of the afferent nerve fibres (excitation).