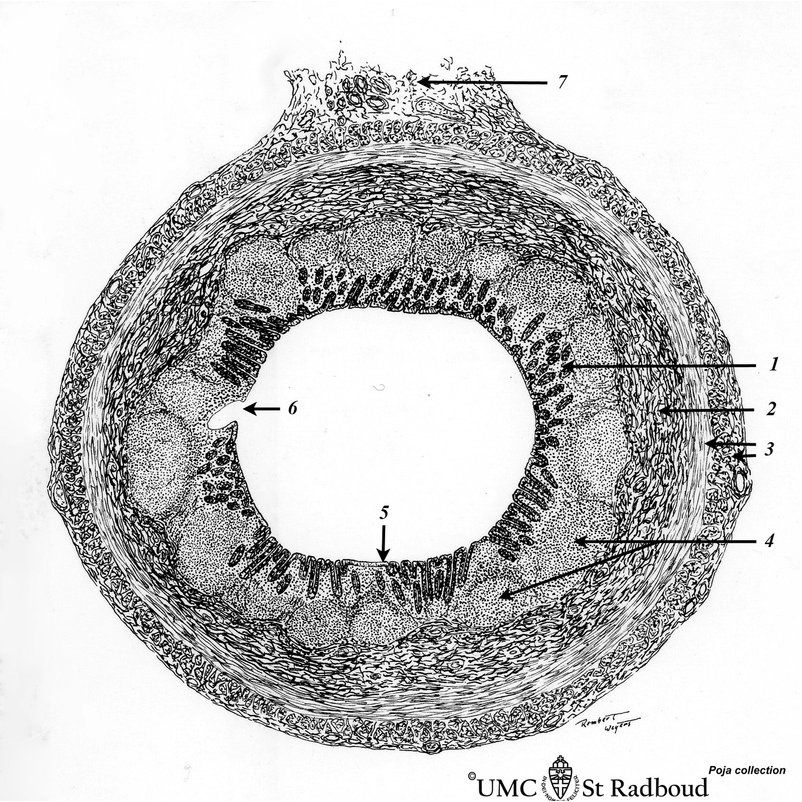 A large amount of non-encapsulated diffuse lymphatic tissue or mucosa-associated lymphatic tissue (MALT) is located in the subepithelial lamina propria (e.g. respiratory passages, genitourinary tract).
The gut-associated lymphatic tissues (GALT) are found in the oesophagus, small intestine and the large intestine. The vermiform appendix arises from the cecum and shows large aggregations of MALT extending through the proper lamina and submucosa. The nodules are similar to those found in the lymph node with darker-stained caps orientated towards the lumen of the gut with the lack of the covering epithelial lining with crypts at some areas. The T cells are mainly distributed throughout the interfollicular tissue. Upon inflammation the plasma cells increase dramatically and largely produce IgA antibodies that are secreted as dimmer held together by the J chain. The IgA binds to poly-Ig-receptors produced by the lining epithelial cells and expressed on their basal and lateral surface. The complex of dimeric IgA and the poly-Ig-receptors is endocytosed into the epithelial cell and actively transported in vesicles to the luminal surface, where the IgA molecule is released into the intestinal lumen in order to neutralize microbial infections.