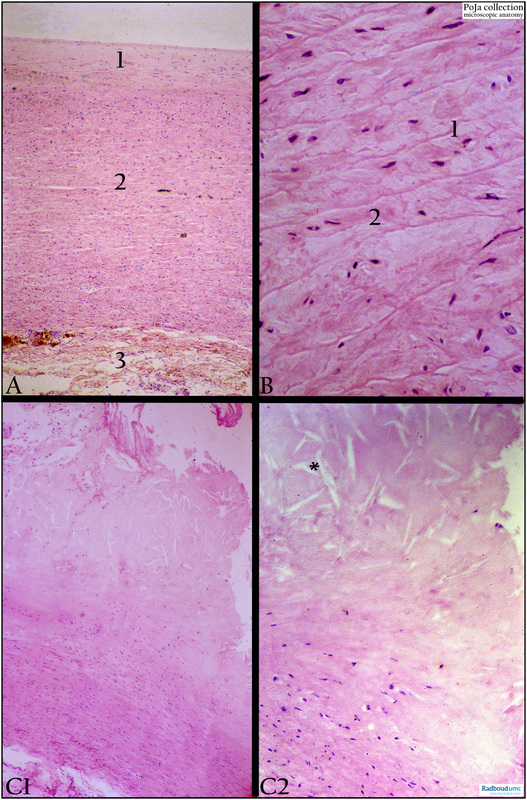 (C1-C2): Aorta with atherosclerosis, HE.  Large aggregates of lipids are found in the superficially in the intima while deeper in the layer discrete lipid droplets are trapped in macrophages (foam cells). Fibroblastic proliferation and increased collagen production result in fibrous intimal thickening. Eventually eosinophilic collagenous fibers become homogeneous and compact, fuse and transform into amorphous material. In these regions cholesterol crystals are deposited and appear as clefts of varying sizes in routine paraffin sections. Close to the lumen large cholesterol crystals (*) within the thickened intima Due to the presence of crystals the sectioned tissue is easily damaged.​

Background:  Arteriosclerosis is defined as a loss of arterial elasticity due to thickening and stiffening of the vessel. Atherosclerosis is the most common type of arteriosclerosis; it is the condition in which plaques build up inside the arteries. The plaques are made of cholesterol, fatty substances, cellular waste products, calcium and fibrin. Fatty streaks in aorta, coronary arteries are the first signs of atherosclerosis from 20 years up and consist of foam cells filled with lipids beneath the lining endothelium. Gradually the streaks evolve into atherosclerotic plaques or can remain stable or even regress. An earliest event in atherogenesis is an injured endothelium that can be triggered by e.g. trauma, changed laminar blood flow, increased free radicals in the circulation, hyperlipidemia, and hypertension.  An injury provokes an inflammatory response and the endothelium starts to produce surface adhesion molecules (VCAM-1). Together with the release of chemokines this results in attraction of circulating monocytes and T-cells and they adhere to the endothelial cells and squeeze between them to reach the intima. The lining endothelial cells change their shape, lose their tight junctions and permeability to leukocytes, lipids and liquid increases. With the times more protein-lipid complexes (i.a. low-density lipoproteins) are infiltrating into the intima and monocyte-derived macrophages become filled with lipids and are known as ‘foam cells’, and smooth muscle cells (SMCs) appear in the intima. The outgrowth of SMCs originates from the media of the vessel and proliferation is provoked by PDGF (platelet derived growth factor) secreted by macrophages and later on by the platelets. The deposits of lipid also found as extracellular cholesterol stimulate the SMCs to produce matrix proteins as well as collagen fibers resulting in thickening of the intima. Also calcium complexes are deposited and the process advances with cellular necrosis together with erosion of the endothelial cells, aggregation of platelets and the initially small lesions enlarge and thicken to form atherosclerotic plaques (atheromas). These plaques narrow the vascular channel, interfere with the blood flow and also might occlude the lumen with or without formation of a thrombus resulting in decreased oxygenized blood flow. It appears that a chronic inflammation component underlies the process of atherosclerosis e.g. certain previous infections by herpes virus, Chlamydia, CMV. Generally, people of 40 years and older show slight atherosclerotic changes in the vascular channels and atherosclerosis is nowadays assumed to be a chronic inflammation disorder.