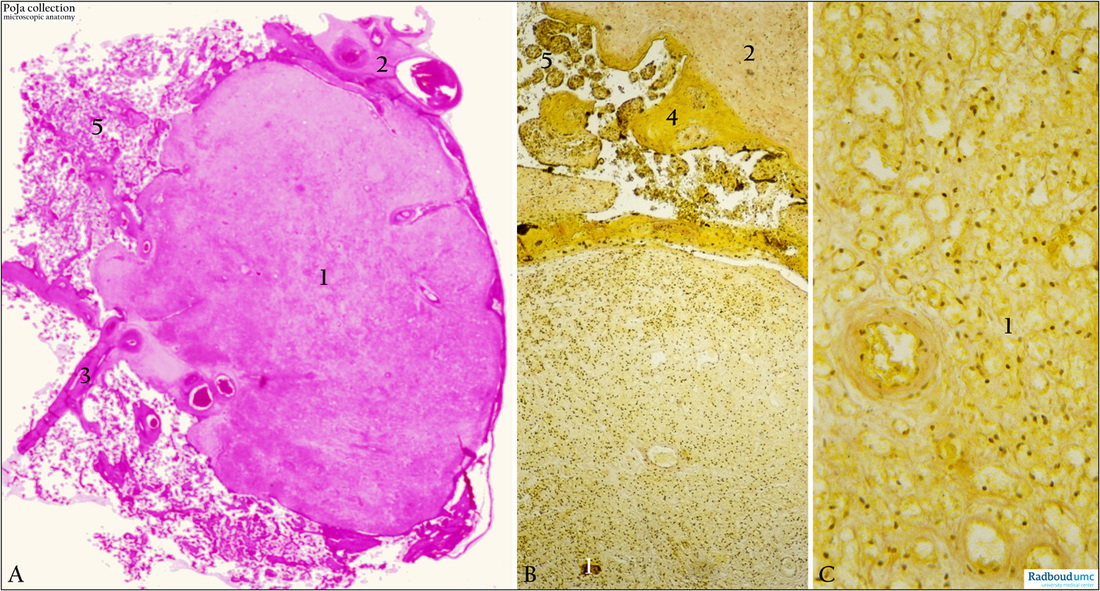 Description: Stain: (A) Hematoxylin-eosin (survey) and (B, C) van Gieson. (A) chorioangioma (1), chorionic plate (2), stem villus (3) and villi (5). (B) shows in (1) a large cellular mass with  accumulated capillaries. At (2) part of the chorionic plate. Subchorionic fibrinoid stains yellow (4). (C) reveals the vascular component as a dense accumulation of capillaries and  arterioles of varying diameter.

Background: After careful and systematic examination in ca. 1% of all placentas  chorioangiomas (or placental hemangiomas) are found. The tumor (up to a maximum of 4-5 cm) is mostly rounded and red-brownish in colour and tends to localise at the chorionic side. It is the most common benign placental neoplasm which expresses varying vascular to cellular components and might show degenerative changes.  However nowadays it appears more a hamartoma-like or a hyperplastic capillary lesion rather than a true neoplasm. Within the tumor the vascular bed represents an arterio-venous shunt in the systematic fetal circulation.  In the case of a chronic placental hypoxia an increased neoangiogenesis in the tumor is the result. If the diameter is more than 4 cm then significant effects on the hemodynamic and circulatory processes of the fetus may lead to fetal heart failure, polyhydramnios.  (Partly by courtesy of  G. P. Vooijs MD PhD, former Head of the Department of  Pathology, Radboud university medical center, Nijmegen, The Netherlands).