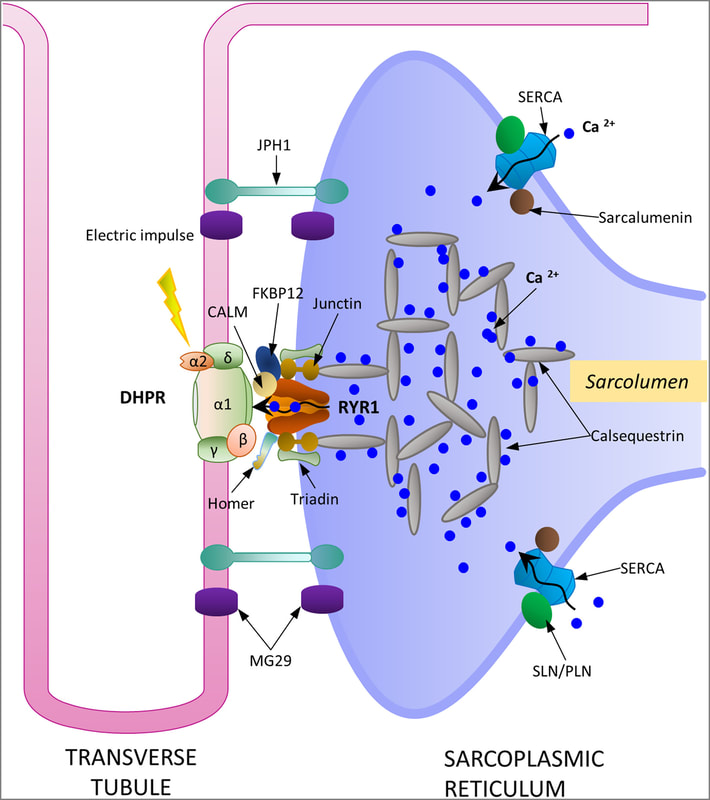 14.1 POJA-L6296-B1 Scheme excitation-contraction coupling at the Triad junction
14.1 POJA-L6296-B1 Scheme excitation-contraction coupling at the Triad junction
For detailed description of the contribution of all depicted proteins see the original article.
Skeletal muscle: A review of molecular structure and function, in health and diseaseKavitha Mukund and Shankar Subramaniam. First published: 13 August 2019, https://doi.org/10.1002/wsbm.1462;  © 2019 The Authors. WIREs Systems Biology and Medicine published by Wiley Periodicals, Inc.  This is an open access article under the terms of the Creative Commons Attribution License, which permits use, distribution and reproduction in any medium, provided the original work is properly cited.

Description:
DHPR, RYR1, SERCA pump, along with calsequestrin form the main proteins responsible for Ca2+ cycling and storage within the sarcoplasmic reticulum. Calsequestrin is a high capacity Ca2+ binding protein found in dense highly concentrated filamentous matrices within the terminal cisternae of sarcoplasmic reticulum.
JPH1 and MG29, are suggested to play significant roles in maintaining the structural integrity of this junction.

Muscle cell excitation, contraction and relaxation:
Following a nerve signal the neurotransmitter acetylcholine is released from the presynaptic vesicles into the neuromuscular junction or synaptic cleft where they bind to the ACH-receptors. This causes depolarisation of the muscle cell membrane, i.e., a sudden influx of Na+ ions in the muscle cell. The resulting action potential is conveyed to the interior of the cell via a series of membranous channels or invaginations (the transverse tubular system or T tubules) that protrude deeply to the surroundings of the myofibrils. The action potential in the sarcolemma opens Ca2+ channels in the terminal cisternae of the sarcoplasmic reticulum (SR). The released Ca2+ is bound to troponin C as part of the thin filaments. Now the Ca sets free the troponin-tropomyosin-complex and the myosin heads can bind to the actin. The resulting myosin-crossbridge facilitates via ATP hydrolysis the loosening of the myosin-head and subsequent move of the myosin head to the next actin-myosin crossbridge site (=contraction). As soon as the action potential stops, membrane pumps (Ca2+ ATPase) in the sarcoplasmic reticulum pump the Ca2+ ions back into the sarcoplasmic reticulum rapidly and stop contraction.  The close association of T tubules and SR form 3 tubules in cross section (Triad). The triad surrounds every myofibril, two triads in each sarcomere.
During relaxation, when Ca+ ions have been pumped back to the SR, the filaments slide back in the original opposite direction. At that time the acetylcholine in the synaptic cleft has been hydrolysed in acetyl and choline by the acetylcholine esterase, and the stimulus has been removed.