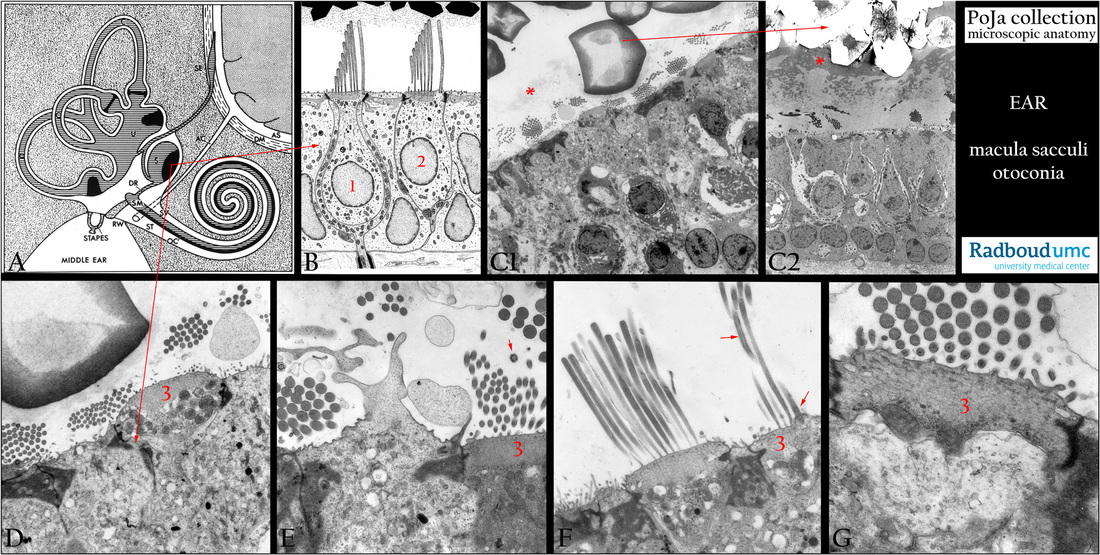 Title: Macula sacculi and otoconia in the inner ear II

Description:
(A): General scheme of the inner ear, human (by courtesy of W. Kuipers, PhD, former Head Biological Laboratory, Department of Otorhinolaryngology, Radboud university medical center, Nijmegen, The Netherlands).
In the osseous labyrinth (grey-pointed) lies the membranous labyrinth  and between them a space filled with delicate connective tissue
and capillaries the so-called perilymphatic tissue where perilymph circulates. With exception of specialised areas the cellular lining of
the whole membranous labyrinth is flat to cuboidal.
The membranous labyrinth contains the auditory and vestibular system respectively cochlea and semicircular canals depicted as striped-grey and black.
(SV)   Scala vestibuli.
(ST)    Scala tympani.
(OC)  Organ of Corti.
(RW) Round window.
(AS)   Subarachnoid space.
(DM) Dura mater and subdural space.
​(AC)  Cochlear aqueduct (or perilymphatic duct) from the subarachnoidal space to scala tympani
(perilymph is analogue to cerebrospinal liquor).The endolymph in the scala media (membranous cochlear duct) (SM) runs via
the ductus reuniens  (DR) to the saccule (S) and from there into the endolympatic duct to the endolymphatic sac (SE) within
the subdural space.
​(C)     The so-called  three semicircular arches are situated in three different planes.
They open into a portion of the membranous labyrinth, the so-called utricle (U).
​
Background 1:
The so-called semicircular canals (C) are involved in angular acceleration i.e. a change in the rate of head rotation.
The macula of the saccule is situated vertically on the wall of the saccule and is attached to the periost of the bony labyrinth.
A macula consists of a small sensory receptor area with type I/type II hair cells and supporting cells covered by a gelatinous glycoprotein layer. Each hair cell has about 40-70 stereocilia fixed in the apical cuticular plate as well as one long free flexible kinocilium with a basal body within the apical cytoplasm. Within a bundle of stereocilia shorter stereocilia are connected to their taller neighbours by protein fibres called tip-links an important component of the mechanotransduction apparatus.
The stereociliary tips are embedded in the so-called otolithic membrane, a jelly-like otoconia-containing substance that contains glycoproteins and a.o. alpha- and beta-tectorin proteins. Otoconia (or statoconia; in fish is called otoliths)) contain an inner core made
of otoconins (glycoproteins) and proteoglycans while the outer surface consists mostly of precipitated CaCO3.
​They add to the density of the membrane contributing in sensing motion and gravity.
Under pressure the cuticular-fixed stereocilia move toward the flexible kinocilium that will sink into the apical cytoplasm.
This leads to ion channel opening resulting in a depolarisation (=excitation). In a reserve order if the stereocilia move away from the kinocilium the result is hyperpolarisation (=inhibition).
Moving upwards from a stationary position (e.g. elevator): the otolithic membrane of the (vertical lying) macula lags briefly behind in
the endolymph and the hair cells are pulled downward. When the moving stops for a short while the otolithic membrane keeps on
moving and the hair cells are bended upward. In this way signals from the macula sacculi to the brain result in the interpretation of
vertical acceleration.

(B): Scheme electron microscopy of the sensory hair cells of the macula, human. The nuclei of supporting cells are localised basally, subepithelially myelinated nerve fibres are present. Hair cells show dense apical cuticula with the stereocilia and a single free kinocilium. Type I hair cell (1) is enclosed by a basket-like afferent dendritic projection with many mitochondria and a single efferent terminal with acetylcholine in the synaptic vesicles. Type II hair cell  (2) shows more small afferent dendrites (with facing intracytoplasmic synaptic ribbons)  and efferent axonal endings with acetylcholine in synaptic vesicles (facing  intracytoplasmic subsurface cisterns).
The efferent nerve fibres control the sensitivity of the sensory receptors. The synaptic ribbon is a cytoplasmic electron-dense structure with a halo of synaptic vesicles.

Background 2:
The Ribeye protein is specific to ribbon synapses together with a large scaffold protein Bassoon.
In contrast to common synapses ribbon synapses use specialised Ca2+ channels for coupling. In their active zones clustered Ca2+
channels activate rapidly at hyperpolarised potentials. During ongoing stimulation the Ca2+ channels show only lenient inactivation.

(C1, C2): Maculae and otoconia, electron micrographs, rat. For comparison a normal (C1) macular epithelium with otoconia  and an example of  a macula with abnormal (C2) otoconia due to chronic mangan deficit. In (C2) the inner core skeletal structure is partly present and the outer zone is totally empty and devoid of fibrillary meshwork. Otogelin  (**) appears still present surrounding the
abnormal otoconia.

(D-G): Various enlargements of the apex of ciliated sensory cells, rat. (E) Apex of supporting cell between two hair cells. Not the cuticular plate (3) as well as more detailed in (F, G), at the single kinocilium (arrows in E and F).