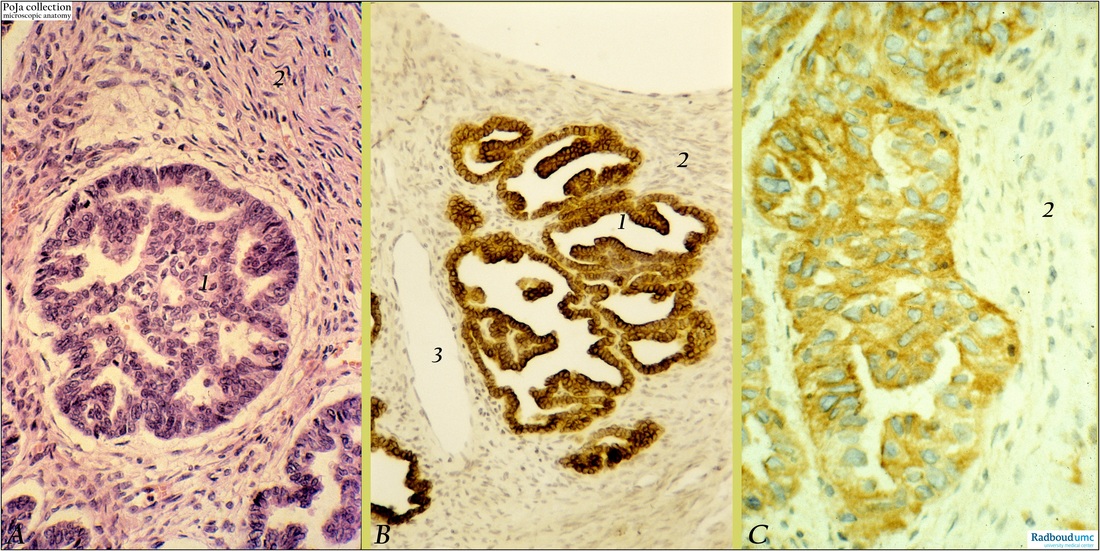 (A):  Invasion of papillary adenocarcinoma (1) into desmoplastic fibrocellular stroma (2). Multilayering, nuclear hyperchromatism and mitoses are present.

(B):  Most cells of invaded papillary adenocarcinoma are positive for CK7 with preferable apical staining towards the lumen. Stroma (2) with two venules (3) is negative.

(C): OVTL3 antibody specifically recognizes membranous and cytoplasmic and epitopes in almost all tumor cells. As a matter of course the stroma is negative (2).

Background:  Normal simple lining epithelia as well as the epithelium of most mucous or serous glands generally express cytokeratin 7. Ovarian surface epithelial cells are also positive for the low molecular weight keratin protein cytokeratin 7. During abnormal differentiation of these epithelial cells CK7 expression remains preserved.   The antibody OVTL3 was generated against ovarian carcinoma cells and detects preferentially cell membrane-bound epitopes of the carcinoma cells in the primary tumor as well as in distant metastases. The antibody was also applied for immunoscintigraphy. Histogenetically it is assumed that a majority of epithelial tumors of the ovary is derived from the ovarian serosa. This lining is the equivalent of the embryonic coelomic epithelium in adulthood. Embryologically the coelomic epithelium give rise to the müllerian epithelium (ducts of Müller) and its derivates are the fallopian tube lining (tubal pathway), endometrial lining (endometrial pathway) and endocervical glands lining (endocervical pathway). The ovarian surface epithelium contains latent undifferentiated cells that can differentiate along similar embryonic pathways. Epithelial tumors derived from those cells that differentiate along a tubal pathway constitute the serous group of neoplasms.  Serous cystadenocarcinomas are essentially a malignant form of serous cystadenomas; they account for ca. 40% of all ovarian cancers and appear to be the most common malignant tumors. Mostly they are bilaterally and occurring later in life than benign and borderline tumors which usually are found between 20 and 50 years. The size of malignant serous tumors varies between10 and 15 cm but sometimes 40 cm diameters are reported. With hemorrhagic foci the tumors are mostly cystic but also partially solid. The fibrous cysts are lined by tubal-like columnar, often ciliated cells and contain blood-stained serous fluid. Solid areas of the tumor are composed of closely packed papillae that might penetrate the tumor capsule. Luxuriant papillomatous growths also extend over the surface and obliterate the ovarian structure. Destructive infiltrative stromal invasion is evident as the tumor ingrowth is diffuse or as solid cell sheets. Extreme degrees of nuclear atypia indicate progress towards undifferentiated tumor cells.