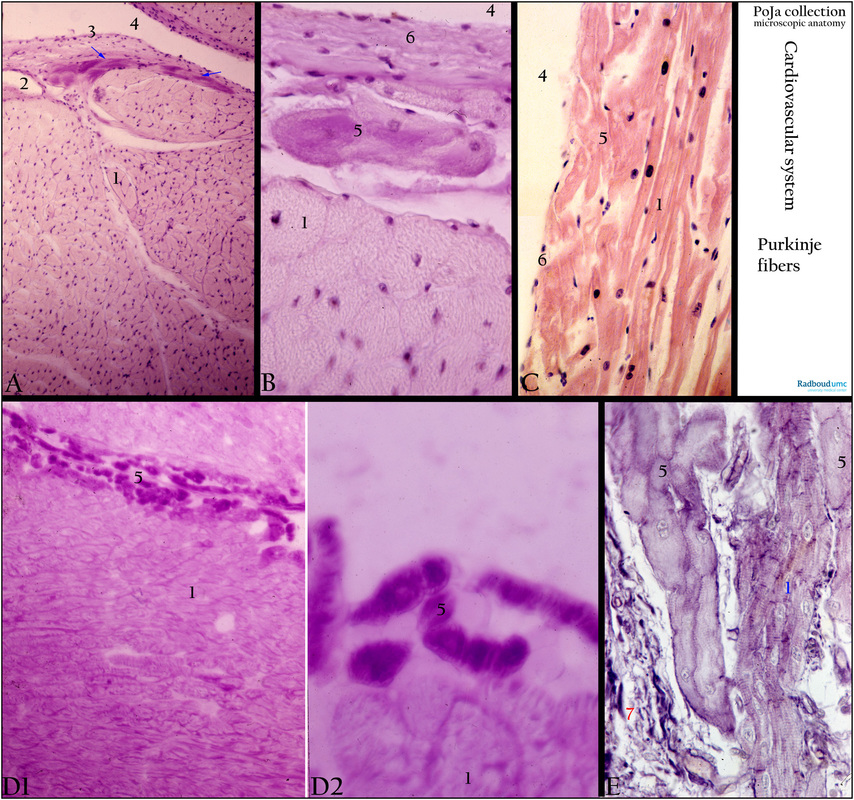 Title: Purkinje fibers in the heart

(D1/2): Survey and detail of heart, ventricle, conducting system, PAS, rat. In the wall of the ventricle a network of terminal branches (5, Purkinje fibers) of the conducting system is distinctly PAS positive. These modified cardiomyocytes (nodal cardiocytes) arranged as cord-like clusters (5) run between the common contractile cardiocytes and contain a large amount of glycogen. Sarcolemmae (= cell membranes with external lamina) of all cardiomyocytes also stain positively.  In contrast to human Purkinje fibers (5) the sizes of these specialized cells do not exceed those of common contractile cardiocytes (1).

(E): Heart, ventricle, conducting system, hematoxylin (Weigert), human. Terminal ramifications of the branching conducting system within the walls of the ventricles show elongated cylindrical cells referred as Purkinje fibers (5). These nodal cardiocytes contain central nuclei, myofibrils and light-stained areas due to the presence of glycogen. There are no intercalated disks in contrast to the adjacent common fusiform cardiomyocytes (1). Connective tissue (7) with small blood vessel.

Background: The conducting system of the heart (mammals) is composed of: 1. Sinoatrial (SA) node of Keith and Flack, 2. Atrioventricular (AV) node of Aschoff-Tawara, 3. Atrioventricular or common bundle of His, 4. Right and left branches on either side of the interventricular septum, 5. Terminal endings of the branches to the papillary muscles and the ventricle walls. The conducting cells (nodal cardiocytes) form strands supplied by many sympathetic and parasympathetic nerve fibers and capillaries. These specialized fusiform cells are modified smaller cardiocytes. They contain myofibrils and a large amount of glycogen but lack the transverse tubules of the T-system and there are no intercalated disks. The strand cells are interconnected by junctional contacts of the same type as in normal myocardiocytes. In the distal projections of the conducting system i.e. the interventricular branches the cells become larger (up to 50 mm width and 100 mm long) and are also called Purkinje fibers.
The sinoatrial node (SAN) cells are also described as “pacemaker” or “nodal-like” cells considered as therapeutic potential stem cells. (doi: 10.1124/pr.114.009597 Pharmacological Reviews April 2015 vol. 67 no. 2 368-388.  http://pharmrev.aspetjournals.org/content/67/2/368.long#title1).