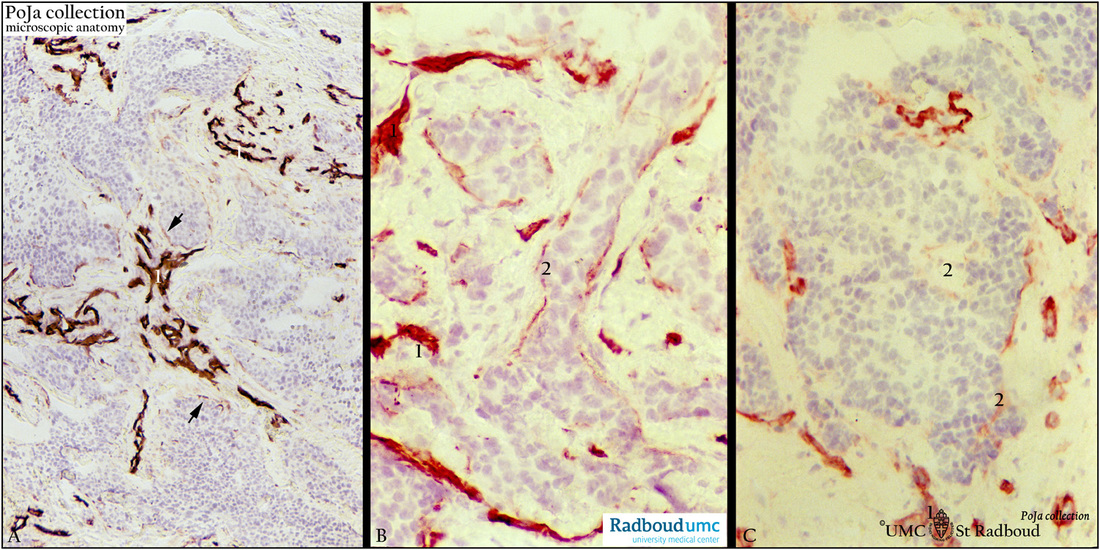 (B): Higher magnification of another section with well-defined laminin-stained blood vessels (1) and cords of tumor cells with discontinuous basement membrane staining (2).

Background: (See also POJA-L-1785+1862).  During invasion of neoplastic epithelial cells the extracellular matrix (ECM) has to be remodeled through proteolysis of ECM proteins before tumor cells migrate into the connective tissue. Structural barriers that separate the connective tissue from neoplastic epithelial cells must be penetrated by tumor cells during invasion. Invasion is allowed by proteolytic degradation (mediated by the plasminogen activator system) of the basal lamina and mobilization of tumor cells through the degraded basal lamina. In invasive breast carcinoma type IV collagen appears significantly decreased (linear but discontinuous staining) or absent. Blood vessels stained normally. Laminin is also absent or shows a discontinuous expression. The candidates responsible for the proteolytic degradation are the zinc-dependent matrix metalloproteases (MMPs). They degrade components of the ECM and are involved in the pathologic remodelling of ECM in tumor invasion and metastasis. MMPs are subdivided into four subgroups: interstitial collagenases, gelatinases, stromelysins and membrane MMPs.

Collagen type IV component in the basal lamina is thought to be degraded by gelatinases mostly MMP-2 (gelatinase A) and MMP-9 (gelatinase B). It was shown that by stromelysins (MMP-3, -7, -10, -11,) that have relatively broad substrate specificity some laminins are proteolytically processed. In contrast to the basal lamina the connective tissue is composed of cells distributed in a meshwork of collagen fibres (main forms I,II, III), glycoproteins, proteoglycans and hyaluronic acid. This connective tissue is believed to be broken down mainly by interstial collagenases and some stromelysins.  Collagen type VII is often degraded prior to collagen type IV and laminin in early invasion.  Nowadays progresses of laminin and integrin research gain more insight into invasion and metastasis. It is reported that specific laminin isoforms sharing the same b1-chain are laminin-2, laminin-8 and laminin-10 and appear as new breast carcinoma angiogenic markers. These isoforms change in pre-invasive and invasive breast ductal carcinoma together with its metastases. Interactions between integrin (e.g. VLA-6) as a laminin receptor and laminin as a ligand for laminin receptor appear also to play a role in invasion of breast carcinoma cells.  Laminin 332 (formerly laminin 5)-producing cells coexpressing a3-integrin is associated with aggressive features of tumor cells.