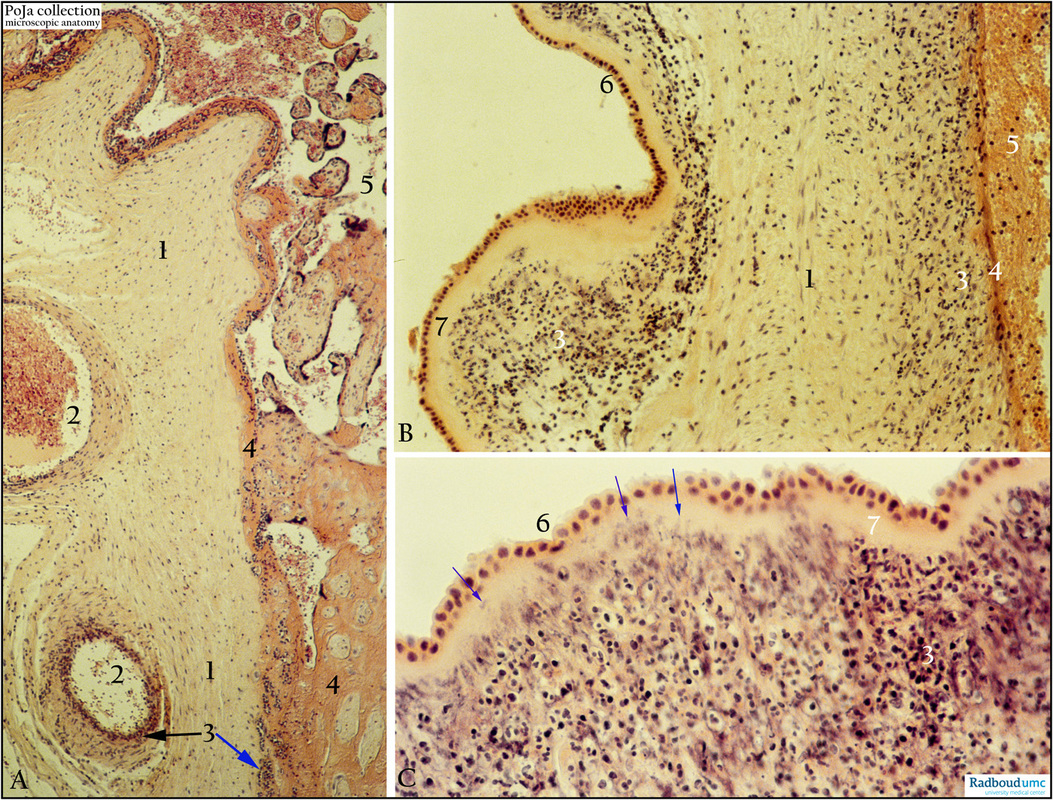 (A): Left side partly teared chorionic plate (1) with two chorionic vessels (2) and infiltration of  PMN (3). To the right reddish subchorionic fibrinoid (Langhans, 4) infiltrated by PMN. (5) intervillous space with some chorionic villi.

(B, C): At higher magnification: A continuous lining of amnion epithelium (6) on a compact layer of acellular stroma (7) followed by a diffuse infiltrate of PMN (3) of varying density and depth of penetration in the chorionic plate (1).
Deeper towards the intervillous space (5) a band of PMN (3) close to the subchorionic fibrinoid (4) is also present.
(Arrows, C) point to diffuse aggregations of likely bacteria.
​(Partly by courtesy of  G. P. Vooijs MD PhD, former Head of the Department of  Pathology, Rdboud university medical center, Nijmegen, The Netherlands).

Background: Chorioamnionitis is the most important acute inflammatory disorder of the placenta because of its frequencey (about 20 % of all placentas). The placental and fetal infection occurs via ascending  (transcervical route), hematogeneous (transplacental route) or via the oviduct. Ascending infections are mostly bacterial (normal flora of the cervix/vagina) and involve fetal membranes, amniotic fluid and umbilical cord.  Generally the amnion cells, chorionic cells and decidual cells produce uterotonins a.o. prostaglandins for uterine contractions. A programmed-weakening process such as collagen remodeling of the cervix occurs under the influence of matrix metalloproteinases with an increased apoptosis in the amnion cells. Together with the result of stretch and shear forces of uterine contractions all these processes result in regular labor with the rupture of fetal membranes. An infection for the fetus causes inflammation resulting in intrauterine hypoxia (villous edema) as well as preterm delivery. Bacterial colonization with release of endo/exotoxins induces production of pro-inflammatory cytokines (IL-1, αTNF with IL-6, IL-8). This leads to neutrophilic activation and stimulation of synthesis/release of uterotonins and activation of matrix metalloproteinases. Preterm labor in fact results from these processes.