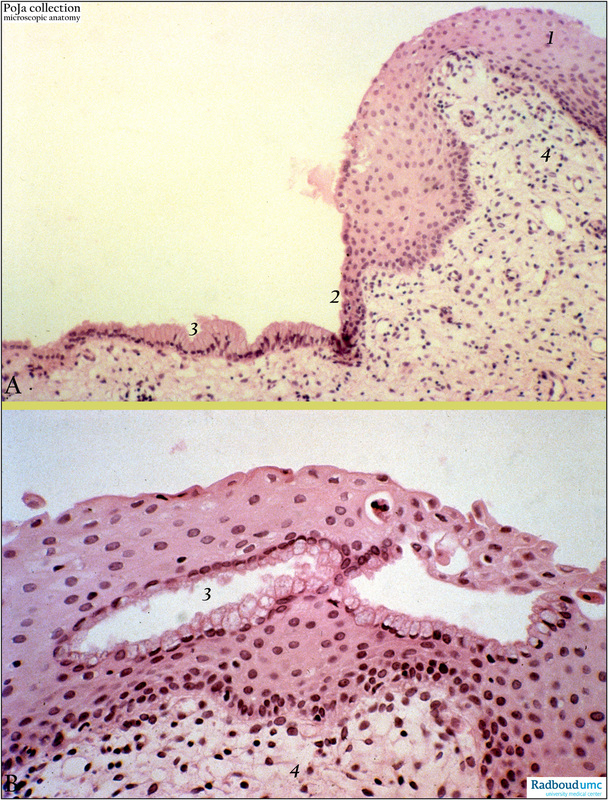 (A): Normal stratified squamous epithelium of vagina (1); a focal area of transition (2) into one layered mucous epithelium is observed (3). There is no sign of malignancy. The subepithelial stroma (4) shows delicate fibrillar connective tissue.

​Clinical background:  The occurrence of adenosis vaginae as well as clear cell carcinoma (adenocarcinoma) is related to the use of the synthetic oestrogeen DES (diethylstilboestrol). It is assumed to be the result of DES-induced malformations of the Muller duct. Mostly adenosis is localized in the anterior or lateral wall of the vagina as well as in the distal 1/3 or in the proximal 2/3 part of the vagina. Adenosis is characterized by replacement of slightly keratinised stratified eptithelium by a lining resembling endocervical lining (one layer columnar or mucous lining), or endometrial lining (one layer columnar epithelium), or tubal lining (one layer cuboidal up to columnar ciliated epithelium alternating with mucous cells). Glandular structures of varying diameters are lined with one of the above-mentioned epithelial types. Frequently adenosis is observed close to areas of clear cell carcinomas but malignant degeneration of adenosis are usually not found during follow-up studies. For the time being both the processes should be regarded as separate entities. There are three forms of adenosis (generally rare): (1) an occult type: characterized by the presence of glands below the intact vaginal lining and sometimes there is a direct contact between the glandular lumina and the vaginal mucosa; (2) a cystous type: solitary or multiple cystic formations (analogue to the nabothian follicles in the cervix) below the vaginal mucosa and sometimes in contact via a draining duct to the  vaginal lining;
(3) an erosive type: locally certain areas of the vaginal lining are replaced by cylindrical epithelium  exposed as reddish stained erosive confluent areas even extending to the labia.
These aberrant areas are assumed to be analogue to the ectropion of the cervix: an adenomatous type: the increase of glandular structures and the surrounding  stroma results in polypous solitary or multiple protuberances that even could develop into distinct polyps and might easily results in bleeding.  The surface lining appears to be stratified (macroscopically white- stained) or cylindrical epithelium (macroscopically reddish-stained) and due to infection chronic inflammation can cause ulcerous damage.