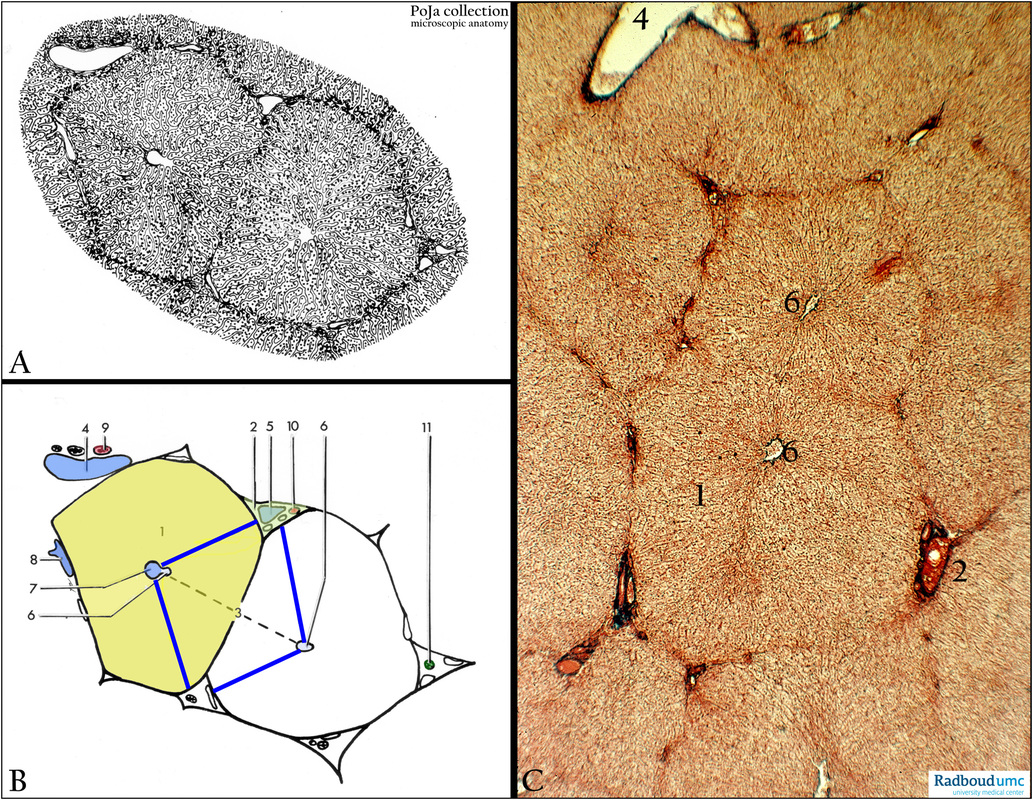 Title: Hepaton as structural unit in the liver (human)

Background: Via exocrine secretion the bile, produced by the liver, is stored in the gallbladder and subsequently released into the duodenum. There, the bile contains bile acids (for emulsification of lipids), bilirubin, phospholipids, and cholesterol. In addition the liver produces plasma proteins such as albumin, clotting factors and many other products, all released into the sinusoids. Furthermore, the liver is involved in metabolizing nutrients, storage and release of glycogen as well as detoxification. The liver is covered with a fibrous-elastic capsule (Glisson) that is partly fused with the diaphragm and partly covered by the visceral peritoneum. With the connective tissue blood vessels penetrate into the liver that is constructed as lobuli. The smallest unit is called a hepaton. The liver cells are arranged in anastomosing single rows (or hepatocyte plates) “single stone walls” that are covered with a network of fenestrated endothelial cells and Kupffer cells.  The space between the liver parenchym cells studded with fingerlike microvilli and the endothelial cells is called the space of Disse. The space between the plates of liver cells establishes a communicating exchange space of sinusoids. The blood supply runs via two systems: (a) the hepatic artery (O2-rich) supplies oxygenated blood. Their smaller branches split into interlobular arterioles ending up in the capillary liver sinusoids.  (b) Hepatic portal vein that split into interlobular venules. This system accounts for 75% of the blood supply and drains directly from the gastrointestinal tract. Therefore the blood is deoxygenated, but rich in nutrients.  Once passed the liver parenchym cells the blood is collected into a central vein in each hepaton and further transported via sublobular veins into the inferior vena cava. Adjacent liver cells form intercellular bile canaliculi that end up in bile ductules, intrahepatic bile ducts and hepatic duct. The intercellular canaliculi are sealed with tight junctions and are provided with microvilli. Within the Disse space, i.e. between lining endothelial cell and liver cell, one can find lipocytes or hepatic stellate cell (fat storing cells.  The walls of liver parenchym cells are fortified by a network of reticular fibers (collagen III) running within the space of Disse.