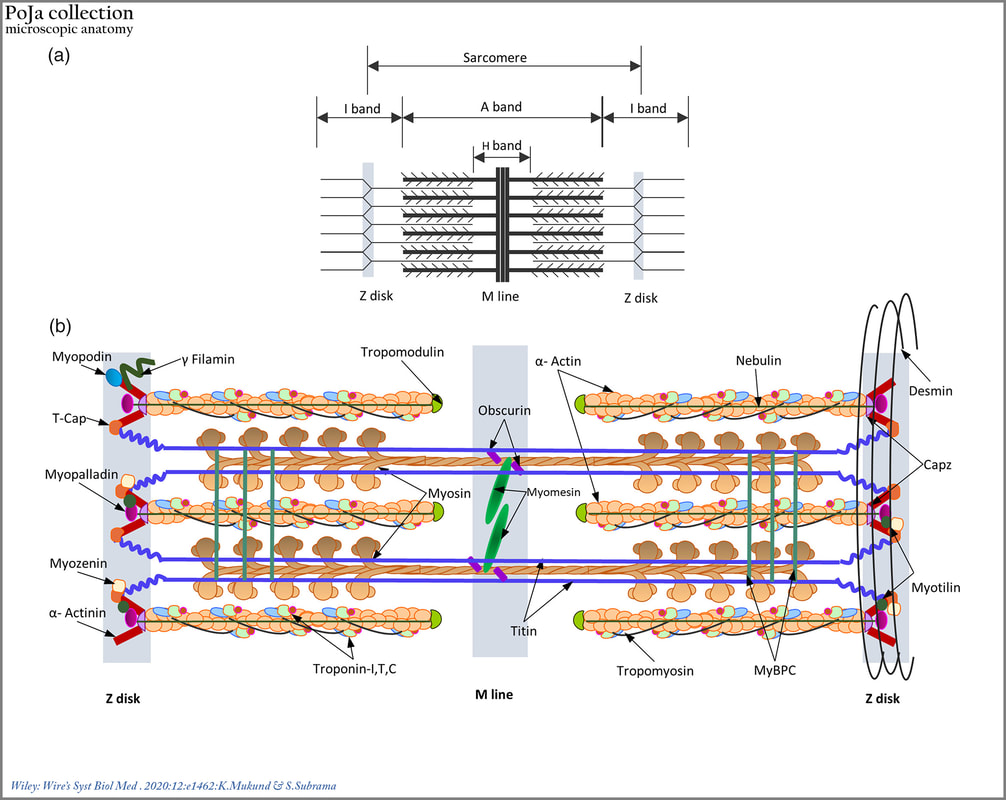 14.1 POJA-L6293-C Scheme of skeletal muscle sarcomere
14.1 POJA-L6293-C
(Skeletal muscle: A review of molecular structure and function, in health and diseaseKavitha Mukund and Shankar Subramaniam, First published: 13 August 2019, (https://doi.org/10.1002/wsbm.1462). © 2019 The Authors. WIREs Systems Biology and Medicine published by Wiley Periodicals, Inc. This is an open access article under the terms of the Creative Commons Attribution License, which permits use, distribution and reproduction in any medium, provided the original work is properly cited.

Description:
(a): Schematic representation of the striated muscle sarcomere showing the arrangement of thick and thin filaments in the sarcomere and identifying bands of overlap between them.

(b): Schematic diagram of the sarcomere summarizing organization and location of major sarcomeric proteins.
Cytosolic Ca2+ brings about a conformational change in the structure of troponin C, revealing myosin binding sites.
Myosin heads successively bind and crawl along the length of actin, bringing about sarcomeric contraction.
Titin and nebulin, function as “molecular templates” maintaining the length of the thick and thin filaments, respectively.
A whole host of proteins within the M‐line and Z‐disc function mainly to maintain structural integrity of thick and thin filament lattices, respectively. The desmin intermediate filaments reinforce and integrate the structure of the muscle cell by forming transverse links between adjacent myofibrils.

One thick filament (myosin) is formed by aggregation of about 300 myosin molecules. The myosin molecule is composed of two tadpole-shaped heavy chains (200 kDa each) (tail portions are coiled around each other) with four small light chains (20 kDa each) attached to the head portions. One myosin head is paired to two myosin light chains. The heavy chain head binds ATP and is called therefore myosin ATPase that splits ATP in ADP and Pi, thus generates the force for the movement along the actin filaments (contraction) by rotating the myosin molecule “neck”, (swinging lever-arm hypothesis).  In addition, the heavy chain myosin also has an actin-binding domain. Different myosin isoforms are found in different muscles.  (www.sciencedirect.com/topics/biochemistry-genetics-and-molecular-biology/myosin)

The light meromyosin (LMM) fragment of the skeletal myosin II type corresponds to two thirds of the tail and is responsible for the self-assembly of the protein dimers. The heavy meromyosin part (HMM) contains two sub-fragments: the globular head S1 being the motor domain, and the proximal third of the tail, sub-fragment S2, that acts as a flexible connection between S1 and LMM.

The myosin binding protein (MyBP) and the elastic protein titin are associated elements of the thick filaments.