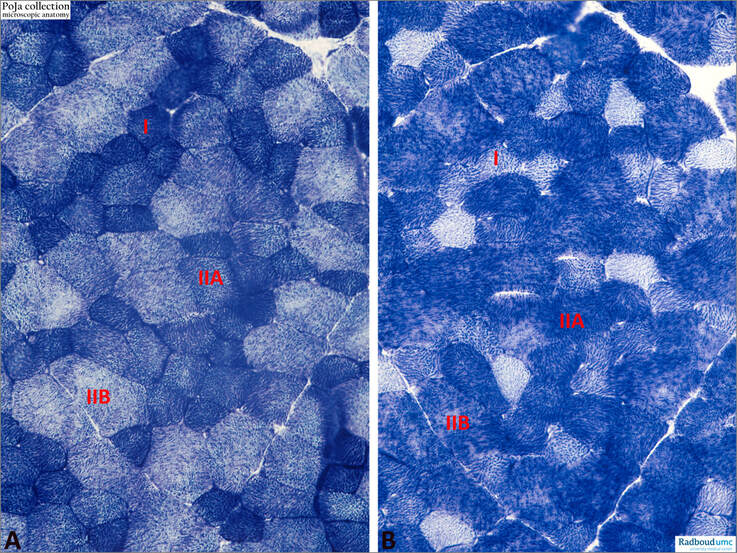 (B): α-Glycerolphosphate  dehydrogenase (GPDH) staining, rabbit. The larger type IIB muscle fibres (IIB) and the smaller IIA ones (IIA) are strongly positive. Less activity is shown by type I fibres (I).

The activity of succinate dehydrogenase (SDH, complex II of the mitochondrial electron transport chain), is a marker of skeletal muscle oxidative capacity. Since skeletal muscle oxidative capacity varies by fibre-type (type I, type IIA, type IIB), categorizing SDH activity by fibre type is important, particularly if there are differences in fibre type between groups.

α-Glycerolphosphate  dehydrogenase (GPDH) is a non-coenzyme linked α-glycerolphosphate dehydrogenase and together with lactate dehydrogenase are found in type II fibres. So, type II fibres selectively utilize the substrates of the glycolytic cycle in their metabolism. In rabbit IIA and IIB fibres have similar GPDH activities, whereas generally IIA fibres have higher SDH activities than IIB fibres.
The SDH/GPDH activity ratios vary significantly between the two fibre populations in different species. As an example, in rabbit the ratio is high in IIA fibres and low in IIB ones in contrast to the mouse where the reverse values exist.