General structure and function of the ovary. 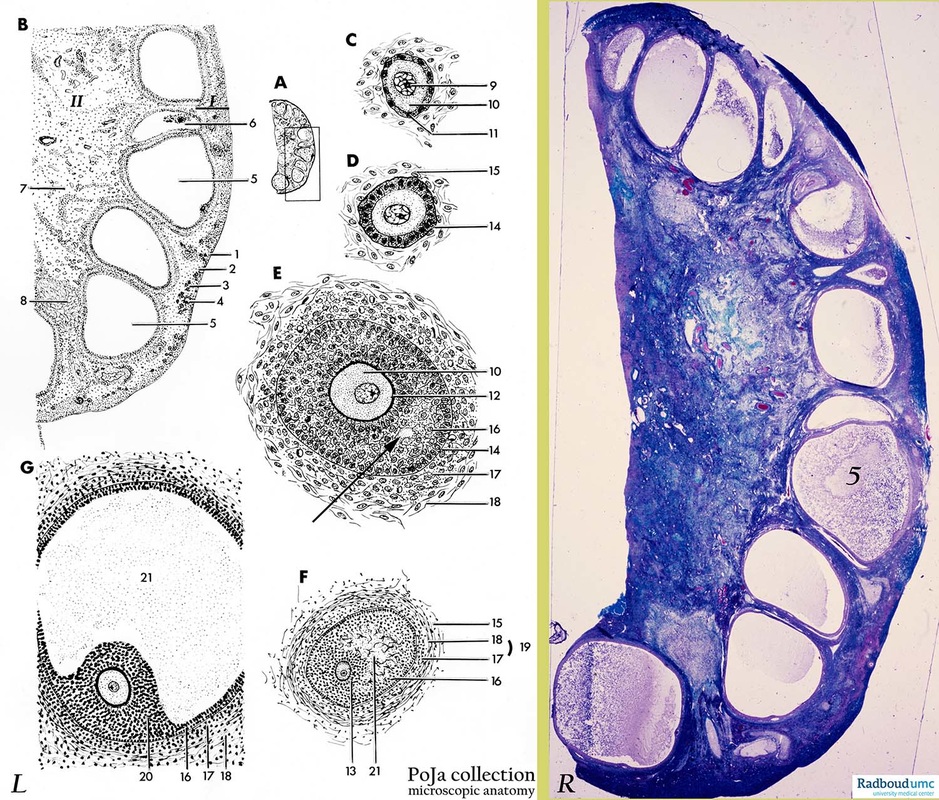 (L) Left: The ovary is the organ where oocytes and hormones are produced. Its structure varies both with the age of the female as well as throughout the cycle. The ovary consists of an outer cortex (I) and an inner medulla or zona vasculosa (II and 7).  The outer cortex consists of an ovarian serosa (1) with a specialized squamous-cuboidal peritoneal mesothelium. It rests on a small tunica albuginea (2) that consists of densely arranged collagenous fibers that continue inwards into the cortical stroma.  The latter one embeds the different maturation stages of oocytes and follicles, as well as myofibroblasts and interstitial (gland) cells. The medulla contains blood vessels within connective tissue, muscle cells, elastic and reticular fibers, but no follicles are present. The blood vessels gain entrance via the mesovarium. The division between the cortex and medulla is indistinct. With each cycle several follicles begin the process of follicular growth and maturation. The initial morphological event in this process is the transformation of primordial follicles to primary follicles. Normally only one follicle achieves the mature state and ovulates per cycle. The remainder follicles cease growing and degenerate at various points of time in the maturation process. After ovulation, at mid-cycle, for a while the ruptured follicle persists as a functionally important corpus luteum. (R) Right: Survey of Azan-stained ovary with cavities less than 2.5 cm in diameter. They are regarded as physiological and therefore called cystic follicles. Part of the same section is depicted in the scheme (Left, A, B). Note (5) corresponds with the cystic follicle (5) below (6) in B (Left).
NOTE
In 1968 a classification system is described by Pedersen and Peters. The stages were determined based on size of oocyte and number of granulosa cells in cross-section for any given follicle in light microscopy. Nowadays a more descriptive classification for folliculogenesis is defined. Primordial, primary, secondary, preantral and antral follicles are commonly used names to refer to different stages of folliculogenesis. In this section we apply for the following descriptions in light microscopy:
- Primordial follicle (type 1): with a unilaminar layer of flattened follicular (pregranulosa) cells. Intermediary primordial follicles: with a single layer of mixed elongated and cuboidal granulosa cells.
- Unilaminar primary follicle (type 2): with a single cuboidal granulosa cells.
- Proliferating primary follicle: in which proliferation of granulosa cells has been initiated resulting in a partial second layer.
- Secondary follicles: with at least two complete layers of granulosa cells, however without any evidence of a cavity.
- Secondary follicle type 3, preantral stage has two-four layers of granulosa cells.
- Multilaminar secondary follicle (type 4, preantral stage): with four-six layers of granulosa (or follicular) cells; start of forming of intercellular cavity as well as additional layer of cells (the theca) outside the basement membrane (membrana vitrea).
- Multilaminar secondary follicle (late type 4, transition to early antral stage or vesicular follicle) with increased amount of granulosa (follicular) cells and formation of antrum folliculi antral follicles with multiple granulosa cells and a distinct cavity. Tertiary follicle (type 5, antral or vesicular follicle) with more than five layers of granulosa cells and large antrum folliculi.
- Larger antral follicles, type 5+ become preovulatory antral or mature i.e. Graafian follicles with sizes up to 20 mm. (References: /710-ovary-introduction.html  : Gougeon, 2003 (http://www.ncbi.nlm.nih.gov/pubmed/20362973)  ; Gook et al. 2008 ( http://humrep.oxfordjournals.org/content/23/2/394.long ;  Edson et al. 2009; Young and McNeilly 2010).

Background folliculogenesis. Granulosa cells: The oocyte in the primordial ovarian follicle is surrounded by a single layer of flattened epithelial follicle cells called pregranulosa cells. These granulosa cells produce the zona pellucida, a thin capsule or layer of glycoprotein polymers and polysaccharides surrounding the oocyte. The major function of granulosa cells is the production of hormones and growth factors that interact with the oocyte during its development. The FSH from the hypophyse stimulates granulosa cells (with an increasing number of FSH-receptors) to convert androgens into estrogens by their enzyme aromatase. The androgens are produced by the surrounding theca interna cells and are delivered to the granulosa cells. However, after ovulation the granulosa cells produce progesterone. The progesterone may maintain a potential pregnancy and causes production of thick cervical mucus that inhibits sperm entry into the uterus. The hormone LH stimulates the growth and differentiation of the theca interna cells that now produce androgens, resulting subsequently in increased levels of estrogens. For further reading we refer to http://www.endotext.org/female/female1/femaleframe1.htm. Luteinizing granulosa cells or large luteal cells (granulosa lutein cells) are modified granulosa cells that produce progesterone. Preantral follicle growth is gonadotrophin-independent for the primordial, primary and secondary stages. Accumulation of follicular fluid between the layers of granulosa cells creates an antrum that divides the granulosa cells into two functionally distinct groups: mural cells that line the follicle wall (mural granulosa cells) and cumulus cells that surround the oocyte. Antral follicle growth towards ovulation is gonadotrophin-dependent. However preantral to antral transition is gonadotrophin-responsive and this transition is characterized by the formation of theca cell layers (Orisaka et al. 2009).  In appears that this transition stage is most susceptible to follicular atresia, i.e. the majority of follicles fall off their growth trajectory and become atretic when a single dominant follicle emerges from the growing follicle pool within the first 5–7 days after the onset of menses. Theca cells: These cells are flattened stromal cells forming a layer outside the developing ovarian follicle. The cells are separated from the layer of granulosa cells by a membrane. The theca cells first become identifiable in preantral follicles after the granulosa cells begin to divide. In variable amounts hilus cells are present in fetal life, in puberty and in almost all postmenopausal ovaries. Aggregates of them can be found in the ovarian hilus and mesovarium. Identical to Leydig cells in testis with specific crystals of Reinke (see later Male Genitalia) however with female chromatin pattern they are believed to be androstenedione -producing cells. These cells are closely associated with nerve fibers and large hilar veins. The presence of ghrelin (as endogenous ligand for GH secretagogue receptor GHS-R) is also reported with central neuroendocrine effects in control of GH secretion and food intake. An oocyte-derived growth differentiation factor-9 (GDF-9) is involved in differentiation of theca cells during the early stage of folliculogenesis as it is required for migration of pre-theca cells to the outer surface of the developing follicle towards secondary follicles. This factor also suppresses granulosa cell apoptosis and follicular atresia and contributes as well as to up regulation of theca cell androgen production thus enhancing preantral follicle growth.