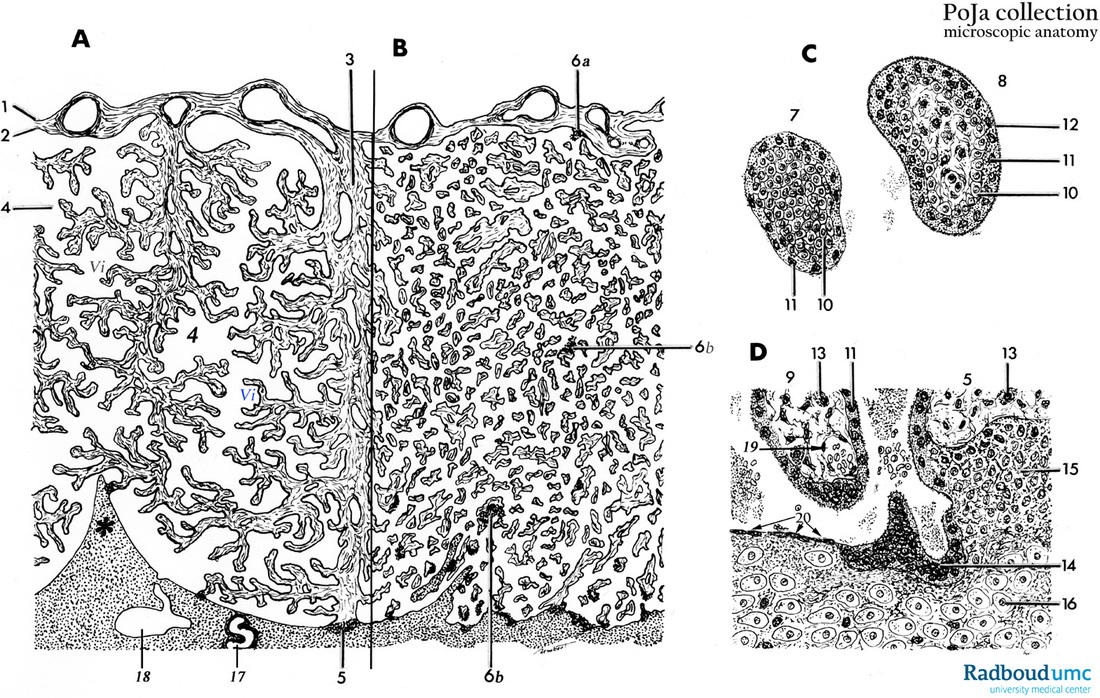 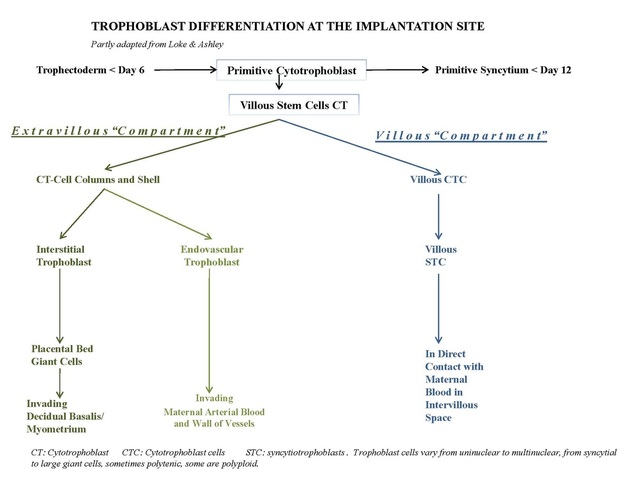 ​The fetal component is represented by the smooth surfaced chorionic plate (2) associated with the amniotic membrane (1, simple epithelial lining) and the chorionic villi (Vi) that near the decidual basalis increase in number and in branching and enlarge to form the villous chorion  (i.e. chorionic frondosum) towards the maternal side.
The so-called intervillous space (4) is the enclosed space stuffed with villi (Vi) between the chorionic plate (2) on one side and the deciduous endometrium at the other side. In the early placenta the continuous lining of the intervillous space as well as that from the chorionic plate and the endometrium consists of an inner layer of cytotrophoblast cells (CTCs) and an outer layer of multinucleated syncytiotrophoblast cells (STCs). In the more mature placenta the cellular lining at the maternal site consists of partly STCs and also, beyond them, the extended fused CTCs contributing to the cytotrophoblastic shell that anchors the villi (anchoring villi, 5 in A) to the deciduous endometrium. The anchoring villi contain cytotrophoblastic tips (=CT-cell columns, 15 in D) that are closely associated with maternal decidua cells (16 in D) resulting in the so-called deciduotrophoblastic complex. Multinucleated trophoblast giant cells originated from the former mononuclear CTCs are also found at several sites (14 in D).

It is assumed that the cytotrophoblast population consists of two types, the villous CTCs (non-migratory, fusion phenotype) and the extravillous CTCs (proliferative invasive phenotype). The latter contribute to the CT-cell columns, trophoblast shell and invade as circulating trophoblast cells that remodel uterine vasculature of the gravid endometrium.  The extravillous CTCs attach to the endometrium and form columns (CT-cell columns, 15 in D) in order to fix the villi to the decidua. These fixed villi are the so-called anchoring villi (5). Both the CTCs from the villi and the CTCs at the base of the cell columns are growing continuously beyond the villi, move deeper and laterally and contribute to the cytotrophoblast shell that attach the chorionic sac to the endometrium.  Later the CT-cell columns appear also to spread laterally and to fuse with neighbouring columns resulting in a cytotrophoblastic shell that covers the entire embryonic compartment (Loke and King 1995; Moffett, Loke and McLaren 2006).

The intervillous space (4) between maternal and fetal components contains maternal blood from the open spiral arterioles (17) exchanging oxygen with fetal blood and eventually back to the uterine veins (18). Reduced pressure of the blood flow is controlled by arterial smooth muscle wall contractions as well as by plugs of CTCs (15 in D).

ad: C: Primary/secondary chorionic villus.
At the site of the decidua basalis the (embryonic) trophoblast is growing fast and forms primary villi which initially consist of an inner core of cytotrophoblasts or CTCs (10) surrounded by a layer of multinucleated syncytiotrophoblasts or STCs (11). In other words, a primary villus is formed when the CTCs formerly surrounding the blastocele invade the STC network.

When, at the 3rd week, the extraembryonic mesoderm grows into the primary villus the resulting villus is called a secondary villus with an inner core of extraembryonic mesoderm, surrounded by a CTC layer and a covering of multinucleated STCs.
Soon the ingrown mesodermal cells differentiate into blood cells and capillaries. Now the tertiary villus consists of an inner core of mesoderm with capillaries surrounded by CTCs and an outer covering of the multinucleated STCs.
The basic structure involved in maternal-fetal exchanges is the chorionic villus, derived from a branched stem villus. The cytotrophoblast cells are also called cells of Langhans and are considered as stem cells for the multinucleated syncytiotrophoblasts.  The latter are involved in selective exchange of substances with the maternal blood compartment within the intervillous spaces, as well as the formation of hormones (e.g. estrogen mediated progesterone production, hCG).
The (syncytio) cytotrophoblast cells are connected by desmosomal contacts, and rest on a basement membrane.
The embryonic/fetal connective tissue is covered by this basal lamina that supports the following epithelial cells i.e. mononuclear CTCs. (10) adjacent to multinuclear STCs (11) which are always in close contact with maternal blood within the intervillous spaces (D, *). CTCs normally proliferate and differentiate into STCs that become postmitotic cells.
Fibrinoid deposits in the intervillous space (6b in B) localised on villi surface lacking STC apparently precede reepithelialisation.
The mesenchymal derived fibroblasts in the villous stroma produce various amounts of collagens type I/III/V/VI. In that stroma are also found cells of Hofbauer (13 in D). It is suggested that Hofbauer cells might be involved in the processes of vasculogenesis and angiogenesis in the placenta and also function as a kind of fetal placental antigen-presenting cells, or placental phagocytes (CD68+).
After the 4th month of pregnancy, fetal vessels dilated and are in direct contact with the subepithelial basal lamina (vasculosyncytial membranes). The amount of CTCs decreases and STCs predominate as single covering epithelium of the mature chorionic villus.

ad: D: Tertiary villus.
Part of a tertiary villus (c.q. terminal villus) showing the following structures that encompass the placental barrier:
a. lining cells of fetal blood capillaries (continuous thick endothelium) and its basal lamina  (see also POJA-L1389+L1292; POJA-L1604+L1644).
b. STC (11) en CTC (10) and supporting basal lamina.
The decidua cells (16) within the endometrium (= decidua basalis) are transformed endometrial stromal cells that become epithelial-like polyhedral cells with many ribosomes and glycogen; these cells aggregate as large sheets around the spiral arterioles.
The basal decidua also contains cytotrophoblast cells (15) (trophoblastic shell covering the decidua, see also ad A-B-D) and multinucleated trophoblast giant cells (14) originating from the mononuclear cytotrophoblast population that infiltrates the decidua during the first 4 weeks of the gravid cycle. After the attachment of the CTCs, due to the production of decidual integrins and cytokines,  their subsequent invasiveness is stimulated by secreted HGF (hepatocyte growth factor that binds to the c-met receptor of the trophoblast) while the process of invasion is controlled  by tissue inhibitors of metalloproteases by breaking down the extracellular matrix  and subsequently move into the spiral arteries (17) of the deciduous endometrium. There they replace the vascular endothelium. The replacement, however, is preceded  by or coincident with heavy leukocyte infiltration (macrophages and uNK). The media layer of smooth muscle cells is disintegrated and a matrix-type fibrinoid results together with the expression and deposition of integrins that as a kind of receptor promote new angiogenesis and reendothelisation and thus contribute to remodelling spiral arteries.  This matrix-type fibrinoid consists of a.o. fibronectin, vitronectin, laminin, collagen IV and heparansulfate and is thought to regulate or facilitate trophoblast invasion by specific interactions with cell membrane integrins. The CTCs usually penetrate as far as the inner 1/3 of the myometrium.  At the deeper decidua-myometrium boundary the so-called placental bed giant cells are found derived from more rounded and multinucleated trophoblast cells.
Fibrin fibrinoid-type  deposits in the intervillous space facilitate reepithelisation of degenerated STCs localized on the surface of villi.

Uterine NK cells (uNK) play a significant role in immunotolerance, regulation of the extravillous trophoblast invasion and spiral artery remodeling. It has been suggested by Lash et al. (2010) that uNK cells from different stages of early pregnancy may play different roles based on their angiogenic growth factor and cytokine profiles (Lash, Robson and Bulmer, 2010).
Fetal trophoblasts are important in circumventing a destructive maternal immune response. Trophoblasts produce indoleamine 2,3-dioxygenase (IDO) which inhibits proliferation of alloreactive T cells. They can produce FAS ligand which causes apoptosis of activated alloreactive cells that express FAS, and produce factors that inhibit the complement activation, thus preventing nonspecifically an immune response against the fetus. Trophoblasts do not express the classical HLA-A, -B and –DR, -DQ and DP molecules preventing being a target for alloreactive T cells. However, trophoblasts express HLA-C, -E and –G molecules by which they can avoid NK cell mediated cytotoxicity.  However prevention of reactivity of cytotoxic T cells with specificity for HLA-C or minor histocompatibility antigens is essential for the immunologic acceptance of the allogeneic fetus. It has been shown that fetal trophoblasts are able to induce CD8+CD103+ regulatory T cells in the population of decidual lymphocytes. And these regulatory cells are probably involved  as well in the maintenance of the maternal tolerance.  So, maternal T cells can recognize fetal antigens but are thus prohibited of rejection (Tilburgs, Claas and Scherjon, 2010).

Background: The normal mature placenta is about 3 cm thick with a diameter of 20 cm (pancake-form) and weight about 500 g.
The fetal umbilical vessels (one vein with an elastic internal lamina and two arteries without elastic internal laminae) are embedded in embryonic connective tissue and form the twisted umbilical cord (50 up to 60 cm long) that is attached to the chorionic plate.
The umbilical vein carries about 80% oxygenated fetal blood but due to low oxygen pressure in the latter (20-25 mm Hg), higher cardiac output in organ blood flow, higher hemoglobin concentration in fetal erythrocytes and higher oxygen saturation will provide the fetus with adequate oxygenation.
The hormones secreted by the villous syncytiotrophoblasts are critical for maintaining pregnancy. Mostly STCs contribute to placental hormone synthesis as hCG (human chorionic gonadotropin) essential to maintain corpus luteum progesterone production.
During the third trimester large quantities of placental lactogen are produced affecting the lipid and carbohydrate metabolism of the mother. Many hormones and growth factors are produced, which are however considered beyond the scope of this morphologically oriented description. To mention some of them: estrogens, progesterone, hCS (human chorionic somatomammotropin), insulin-like growth factor, human chorionic thyrotropin, endothelial growth factor. CTCs fusion and functional differentiation of the villous CTC are stimulated by estrogen, glucocorticoids as well as hCG.