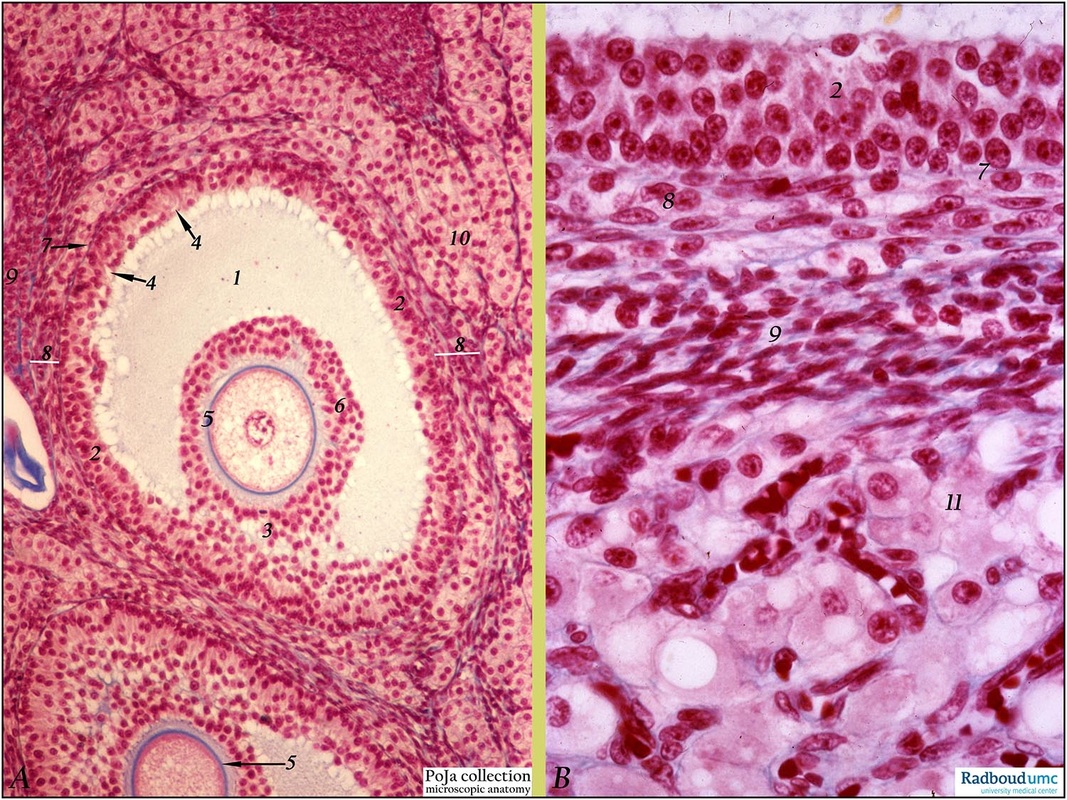 (A):  A tertiary follicle, type 5 (vesicular or antral follicle) has a space called antrum folliculi that is filled with a clear proteinaceous liquor folliculi (1). A thick rim of layers with mural granulosa (or follicular) cells (2) lines the antrum while here at only one pole a heap of granulosa cells covers the oocyte (ovum) the so-called cumulus oophorus (or cumulus ovaricus, 3). The liquor folliculi contains a.o. glycosaminoglycans, growth factors, hormones secreted by the granulosa cells. White-stained luminal droplets along lining granulosa cells are partly due to resorption and fixative influences. Slit-like intercellular spaces (4) between these cells contain liquor and coalesce later as they contribute to enlargement of the antrum. A blue-stained zona pellucida (as a product of the oocyte) (5) marks the boundary between oocyte cytoplasm and ring of radially arranged granulosa cells forming the corona radiata (6) close to the oocyte. The border between follicle and ovarian stroma is formed by a membrana vitrea, a basal lamina reinforced with collagen and reticular fibers (7). Close to the latter the inner theca (or theca interna) (8) cells (formerly spindle-like stromal cells) become more prominent, elongated or polyhedral.  Here the external theca appears to be squeezed between the internal theca cells and is displayed as a small fibrous strip (9). Interstitial cells (10) are derived from the theca interna and form the so-called interstitial endocrine gland of the ovary. They are foamy and contain fat droplets (androstenedione) used a.o. for synthesis of androgens (to be transferred to granulosa cells for the production of testosterone).

(B): Antrum with lining of granulosa cells (2) and membrana vitrea (7). Theca interna (8) is a cellular inner layer, while theca externa (9) is a fiber-enriched outer layer. Close to external theca part of a corpus luteum (11) presents with predominantly granulosa lutein cells and lipid droplets.