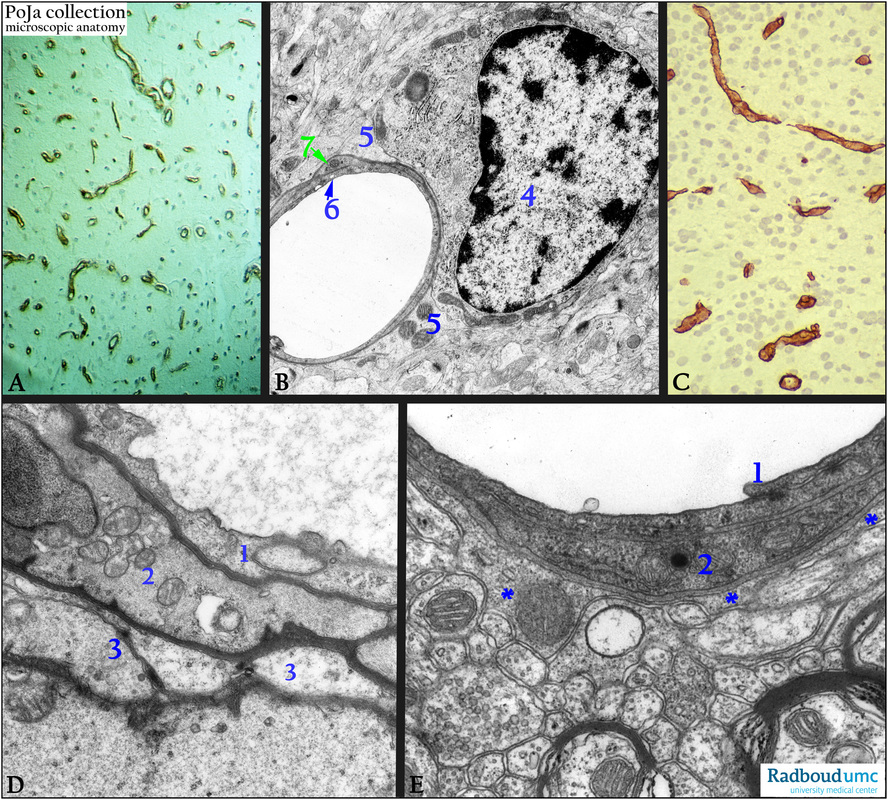 Description:
(A): Immunoperoxidase staining with DAB and antibodies against fibronectin in the cortex, human. Fibronectin (FN) is an extracellular matrix protein involved in facilitating macrophages and activated microglia to clear debris in repair processes after brain injury. FN is produced (temporarily) in both migrating neurons and glial cells. Here FN is found closely apposed to the capillaries.
(By courtesy of H. ter Laak PhD, Department of Pathology, University Medical Centre Radboud University, Nijmegen,
​The Netherlands).

(B): Electron microscopy, perfusion-fixation, rat. A capillary endothelial cell (6) flanked by a pericyte (7) in the corpus striatum is surrounded by very thin processes of an astrocyte (5). The cell with the nucleus (4) is a small neuron in the neuropil environment.
​Note also the numerous synapses and the presynaptic transmitter vesicles.

(C): Immunoperoxidase staining with AEC and antibodies against collagen IV, illustrating the capillaries with the collagen IV-containing basement membranes in the cortex, 4 d postnatal rat.

(D): Electron microscopy, perfusion-fixation, mouse.  A capillary with endothelium (1) enveloped by a pericyte (2) and extensions ( 3) of an astrocyte (endfeet). Note the presence of pinocytotic vesicles in endothelium and pericyte.

(E): Electron microscopy, perfusion-fixation, rat. The neuropil of the cortex with capillary and endothelium (1), pericyte (2) and astrocyte processes (***) on the basal lamina. Note The asterocytes form with their so-called perivascular endfeet (membrana gliae limitans perivascularis) part of the blood-brain-barrier (BBB). Note also the cross-sectioned myelinated and unmyelinated axons.

Background: In the central nervous system the perivascular space is surrounded by a basal lamina derived from both glial and endothelial cells. Diffusion of substances out from the blood to the brain parenchyma is prevented by tight junctions that link the non-fenestrated endothelial cells (continuous endothelium). The structural basis of the blood-brain-barrier (BBB) are represented by these tight junctions. Glucose and selected molecules are offered a free passage but this barrier  excludes most substances and especially potent drugs.