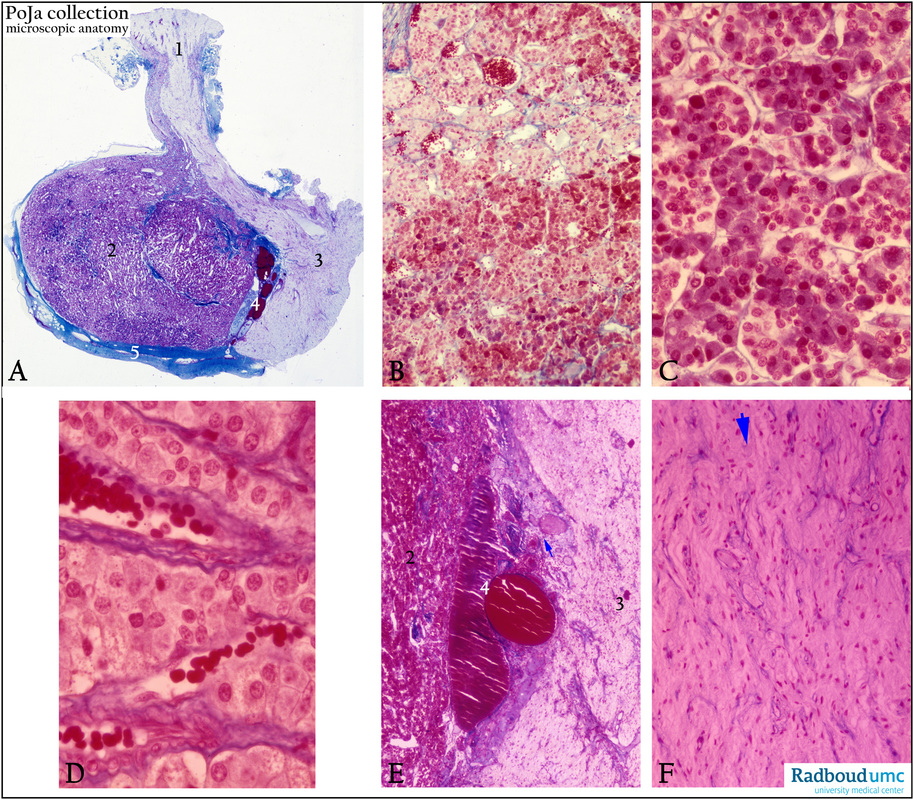 Description:
(A): Survey hypophysis, stain Azan.
(1) Stalk, infundibular lobe or pars infundibularis with eminentia mediana, connecting the hypophysis to the hypothalamus.
The hypophysis is connected to the hypothalamus by a stalk comprising the infundibulum and the eminentia mediana.
(2) Anterior lobe, pars distalis or adenophypophysis being derived from ectodermal pharyngeal roof.
(3) Posterior lobe, pars nervosa containing predominantly secretory nerves from hypothalamic origin.
(4) Intermediary lobe with colloid cysts (red), being part of the adenohypophysis.
(5) Capsule of thin connective tissue.

(B, C): Details of the glandular-like structure of the pars distalis (A, 2) or adenohypophysis. The red-stained cells are acidophilic cells
or α-cells involved in the production of somatotropin and prolactin. The bluish-stained cells are basophilic cells or β-cells, involved in
the production of FSH/LH, or in TSH, or in ACTH. The faintly stained cells, called chromophobe cells (hardly contain granules and are considered as a heterogeneous population of stem cells and degranulated cells , and non-epithelial folliculo-stellate cells equivalent
to dendritic cells.

(D): Faintly stained cells in the infundibular area. Note the numerous capillaries being part of the portal capillary network.

(E): Detail of the intermediary zone (4) with colloid cysts (arrow), adjacent to the adenohypophysis (2) and the neurohypophysis (3).
The major cell type found here is a basophilic cell involved in the production of pro-opiomelanocortin (POMC) from which the MSH (melanocyte stimulating hormone) is generated.