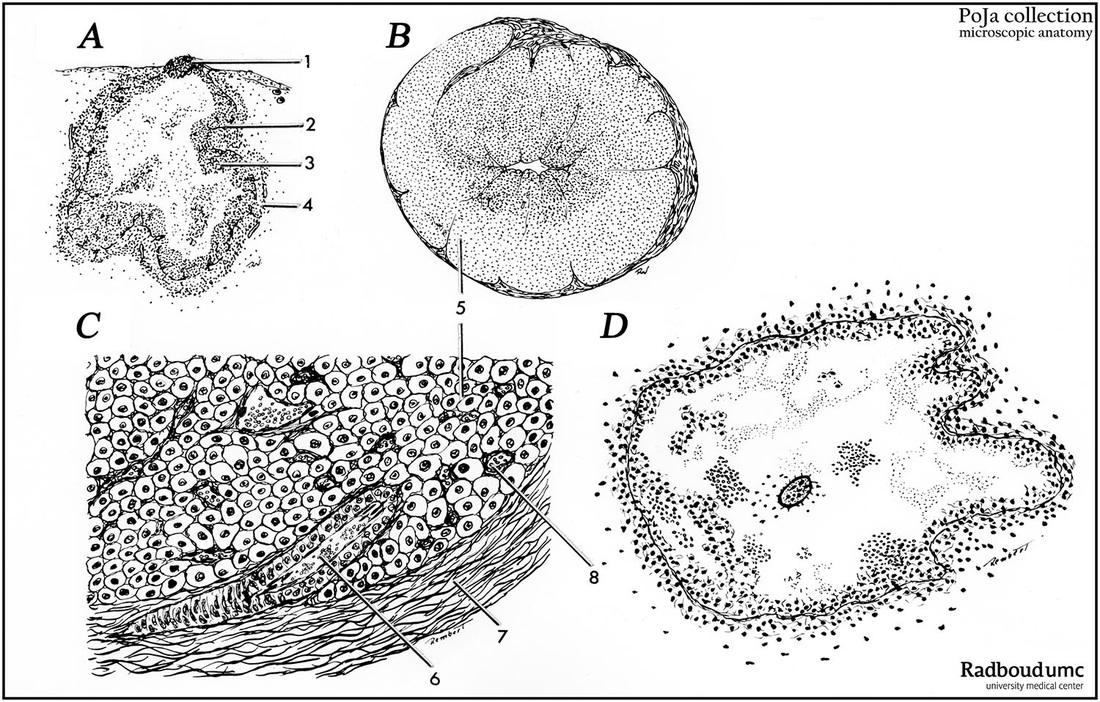 Title: Scheme of some follicles during the ovulatory phase (human)

(1): The stigma with remnants of a fibrin clot after ovulation indicating the remaining mature follicle (without ovum) at the point of contact with the tunica albuginea and the ovary surface epithelium in A. (2): Degenerating basement membrane (membrana vitrea) in A. (3): Folded regions of granulosa cells with ingrown capillaries and infiltration of internal theca cells eventually resulting in the formation of granulosa lutein cells in A. (4): Internal theca cells in A. (5): Predominantly large granulosa lutein (or follicular lutein) cells in B-C. (6): Ingrowing arteriole in C. (7): Tunica albuginea of ovary in C. (8): Capillary in C.

Background: After the oocyte is released during the ovulation the remained granulosa and theca cells of the emptied follicle initially look red due to the left blood clots (A, corpus rubrum or hemorrhagicum) that will seal the “ovulation window”. The remaining follicle sheath is going to be reconstructed during the first 2-3 days, and turned into a corpus luteum (B, C). The lining stratum granulosum of the empty follicle collapses and becomes folded. The basal membrane of the collapsed follicle is broken down and internal theca cells invade in the cellular mass together with capillaries and connective tissue. Under influence of luteinizing hormone (LH) the luteinization process starts; the granulosa cells increase in size and differentiate into granulosa lutein cells and they produce a yellow carotenoid pigment (lutein) as well as progesterone/estrogen (in response to follicle-stimulating-hormone FSH and LH stimulation). Hence the name corpus luteum due to the yellowish color. A corpus luteum of pregnancy (verum) persists until the fourth month with a diameter up to 25 mm (influence of human chorionic gonadotrophin, HCG) as a conspicuous yellow nodule in the ovary. Theca interna cells differentiate into theca lutein cells (or paralutein cells) and produce androstenedione and progesterone (in response to LH stimulation). Granulosa lutein cells are surrounded by smaller theca lutein cells (not shown in C) and form epithelial-like sheets of round or polygonal lutein cells with stored lipid droplets. The accompanying external theca cells provide stroma and supportive septa with blood vessels of the enlarging corpus luteum.
Not all follicles develop fully due to the process of atresia many are lost at various stages of development. These atretic follicles are degenerating follicles and if atresia occurs in an antral stage follicle the oocyte degenerates (in D). Due to collapse of the antrum the basement membrane (membrane vitrea) between granulosa cells and theca interna layers transforms into a thick, wavy band that later becomes hyalinized i.e. the so-called glassy membrane.