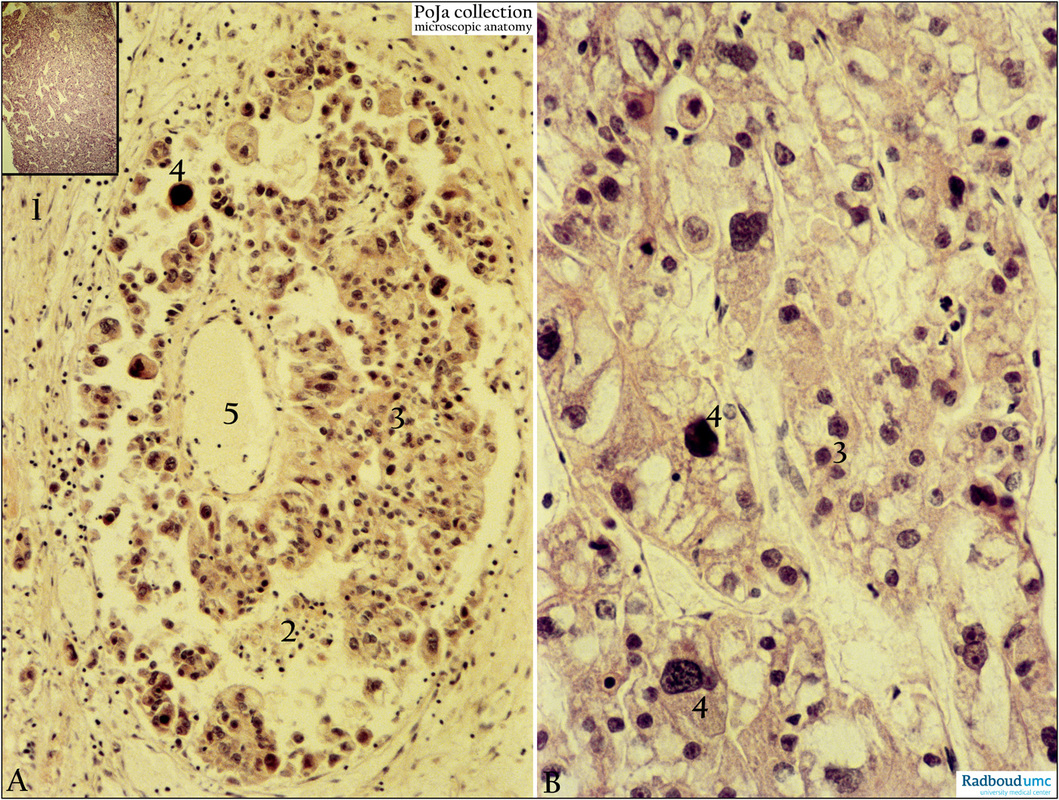 (A): Inset: Survey tumor. Within the uterus (1) a choriocarcinoma forms solitary or multiple nodules composed  of  hemorrhagic necrotic areas (2) surrounded by neoplastic cells. It resembles an early implanted blastocyst with aggregations of mononuclear lighter-stained cytotrophoblast cells (3) and darker multinucleated syncytiotrophoblast cells (4), but no chorionic villi are formed.  A small uterine vein encompassed by tumor cells.
​
(B): The trophoblast shows a variable degree of pleomorphism, distinct atypia and mitoses.

Background: This type of cancerous GTD (gestational trophoblastic diseases) is a malignant tumor derived from  both cytotrophoblast and syncytiotrophoblast. It is a cytokeratin-positive epithelial neoplasm of fetal origin and considered as a neoplastic allograft in the uterus. In 50% of the cases of a hydatidiform mole a choriocarcinoma follows, and macroscopically the tumor appears as a soft largely hemorrhagic mass due to the ability of the trophoblast to invade and erode blood vessels.
Necrosis is due to the fact that the tumor has no intrinsic blood supply and depends on the the maternal vascularisation that is invaded by tumor cells. A choriocarcinoma invades rapidly and deeply into the venous sinuses of the myometrium . Due to the extensive vascular permeation at an early stage blood spread results in metastases to lungs, liver and brain. Persisting trophoblast secretes high levels of hCG that can be monitored in serum and urine. However it appears that this tumor is particularly susceptible for cytotoxic drugs and more than 80% of the patients are nowadays permanently cured. (Partly by courtesy of  G. P. Vooijs MD PhD, former Head of the Department of Pathology, Radboud university medical center, Nijmegen, The Netherlands).