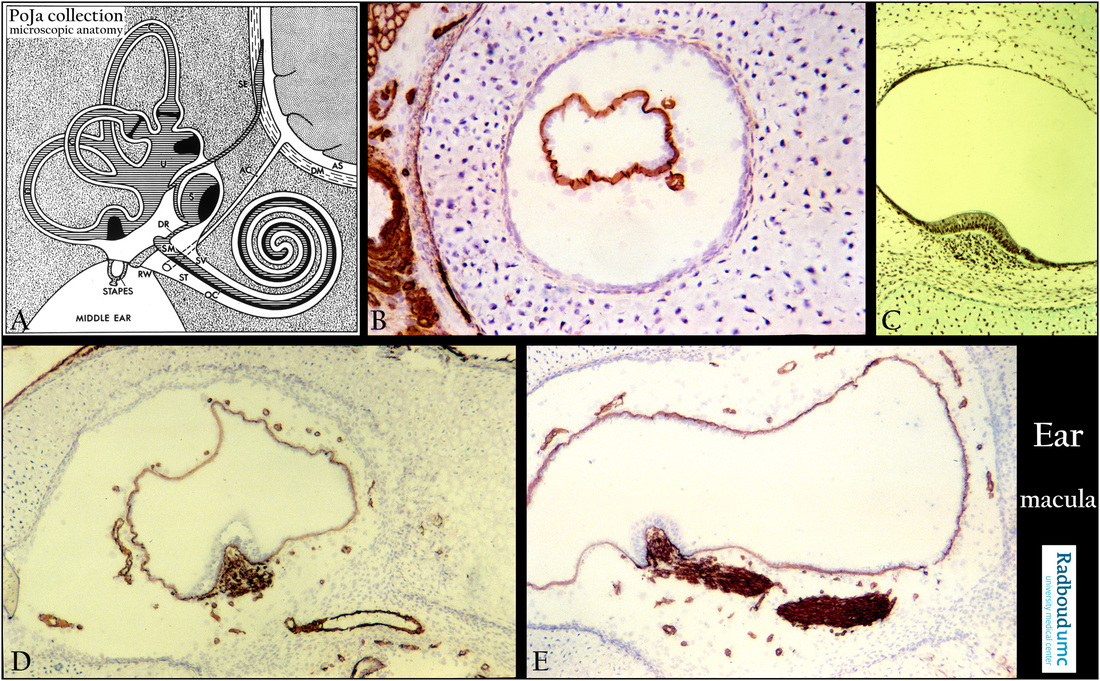 Title: Semicircular canals with ampullae and maculae in the inner ear

Description:
(A): Scheme inner ear, human.
(By courtesy of W. Kuipers, PhD, former Head Biological Laboratory, Department of Otorhinolaryngology, Radboud university medical center, Nijmegen, The Netherlands).
In the osseous labyrinth (grey-pointed) lies the membranous labyrinth  and between them a space filled with delicate connective
tissue and capillaries the so-called perilymphatic tissue where perilymph circulates.
With exception of specialised areas the cellular lining of the whole membranous labyrinth is flat to cuboidal.
The membranous labyrinth contains the auditory and vestibular system respectively cochlea and semicircular canals depicted as
striped-grey and black.
(SV)   Scala vestibuli.
(ST)    Scala tympani.
(OC)  Organ of Corti.
(RW) Round window.
(AS)   Subarachnoid space.
(DM) Dura mater and subdural space.
​(AC)  Cochlear aqueduct (or perilymphatic duct) from the subarachnoidal space to scala tympani
(perilymph is analogue to cerebrospinal liquor).
The endolymph in the scala media (membranous cochlear duct) (SM) runs via the ductus reuniens  (DR) to the saccule (S)
and from there into the endolympatic duct to the endolymphatic sac (SE) within the subdural space.
​The so-called  three semicircular arches are situated in three different planes i.e.:
1. superior canal that detects head rotations on the anterior-posterior axis;
2. horizontal canal detects movement on a vertical basis (‘nodding yes’, rotation of the head up and down on the neck);
3. posterior canal detects rotations on a sagittal plane.
The semicircular canals open into a portion of the membranous labyrinth, the so-called utricle (U), the endolymph runs into the endolymphatic sac (SE).

(B): Cross-section of semicircular canal, immunoperoxidase staining with AEC and antibodies against collagen IV, 1day  postnatal rat.
The canal is positively lined by collagen IV in the basal lamina. Between the membranous canal and the cartilaginous labyrinth
a connective tissue network (shrinked due to preparation) with few positive capillaries is present (perilymphatic tissue).
Close to the cartilaginous canal collagen IV is only positive in the lining connective tissue layer (= perichondrium) of the cartilage as well as
in basal lamina-containing structures such as blood vessels.
The hyaline cartilaginous tube is surrounded by a thin layer of perichondrial cells that give rise to the chondroblasts.
Postmitotic daughter cells remain together. Between the cell groups the interterritorial matrix stains weakly bluish.
During maturing the hyaline cartilage will be replaced by bone (see 15.1 POJA-L7006+7007+7011 Hyaline cartilage;  16.1.3 POJA-L7109+7108+7101+7097 Endochondral ossification in foetus 4)

(C): Macula sacculi, stain trichrome Goldner, fetus human. In the saccule the future macula is a small patch of receptor and supporting
cells attached to the perichondrium of the hyaline cartilaginous labyrinth (in adulthood the future endosteum of the osseus labyrinth).

(D, E): Crista ampullaris, staining with AEC and antibodies against collagen IV, 1day postnatal rat. Cross-sectioned nerve fibres of the nervus utricularis (in D) as well as longitudinal sectioned nerve fibres (in E).
Cartilaginous labyrinth encloses membranous labyrinth  separated by the perilymphatic tissue.
Each semicircular canal shows an expanded end or ampulla housing a specialised protruding structure the crista ampullaris.
Basal lamina containing collagen IV is distinct in capillaries, with the nerve bundles traversing to or close by the crista ampullaris.
Bipolar neurons in the superior and inferior vestibular ganglion (Scarpa’s ganglion) send their processes to the three cristae in the
ampullae as well as to the maculae in utricle and saccule.