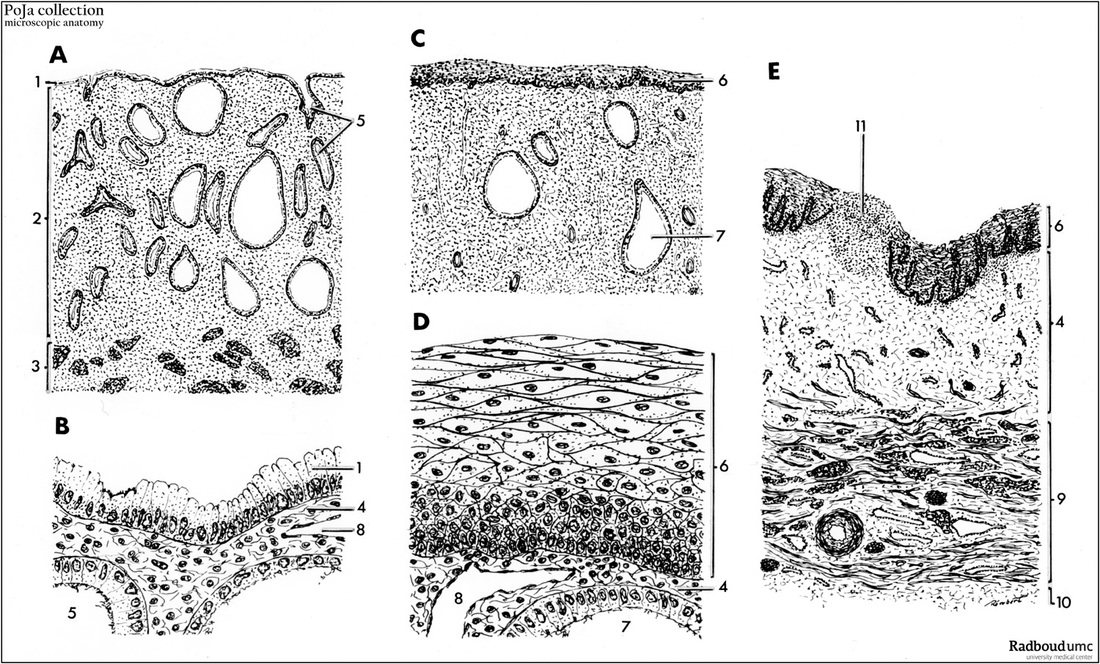 Title: Scheme of cervix and vagina (magnification with objective x35 or x350)

Ad (A-B-C-D): The cervix is the lower part of the uterus that protrudes into the upper part of the vagina. It forms the communication from the uterine lumen toward  the cervical canal and subseqently through its external os (the lower end of cervix) into the vagina. Two components are distinguished: the endocervix (upper 2/3 part) and the ectocervix (lower 1/3 part). The endocervix is the lining of the endocervical canal and is composed of one-layered mucus –producing columnar cells. The ectocervix is the external segment of the cervix (or portio vaginalis) covered by nonkeratinising squamous stratified epithelium (NKSSE) that is continuous with the vaginal lining. The epithelial transition between endo- and ectocervix is called the squamocolumnar junction (SCJ) (see further under Background). In the endocervix the mucosa (2-3 mm thick) is covered by a surface epithelium of columnar mucus secreting cells. In between patches of ciliated cells are located.  The mucosa is folded into transverse folds (co-called plicae palmatae). The lining cells penetrate as deep invaginations or so-called glandular crypts into the fairly dense connective tissue of the proper lamina in which also smooth muscles and many blood vessels are present. The ramified glands run obliquely upwards and outwards from the cervical canal. Estrogens regulate their secretory activity. They produce an alkaline mucus. In the proliferative period the secretion is highly viscous while midsecretorily it becomes more clear and watery. Quite commonly the apertures of glands become overgrown and occluded (see below under clinical background) by exocervical epithelium. The resulting plugged glands or cysts are visible as smooth rounded bumps or firm nodules on the cervix, up to more than 5 mm large. Note that in the uterine cervix there is no division into stratum basalis and stratum functionalis with the consequence that no mucosa is shed during menstruation. At the junction between the uterine corps and cervix smooth muscles merges with dense connective tissue (collagen/elastine) and form the majority of the cervical wall. Close to the external os it is reported that a funnel-like arrangement of smooth muscle and elastin exists to act as a kind of valve for closing the os.

Clinical background 1:
The epithelial transition between endo- and ectocervix is the squamocolumnar junction (SCJ). Prepubertally the junction is generally located at the external os. In puberty, pregnancy or by contraceptives users increase in mass and change of shape of the cervix results in evorsion  of the endocervical epithelium. Cervical eversion, also known as ectropion (often mistakenly termed cervical erosion), is the migration of cells from the lining of the endocervical canal (endocervix) to the outer portion of the cervix (ectocervix).
Under hormonal influences the SCJ passively extends distally on the ectocervix and forms a rim of endocervical tissue (ectopy). This so-called ectropion is reddish and velvety due to capillary network under a transparent thin epithelium. The former SCJ is now replaced more distally than the external os. At puberty the breakdown of surface epithelial glycogen results in a pH of about 3 replacing the former prepuberty alkaline pH.  Exposure to postpuberty acid vaginal environment induces squamous metaplasia of the columnar lining of the endocervix.  Squamous metaplasia is a protective mechanism to replace more fragile columnar lining by stronger squamous epithelium. Mature metaplastic squamous epithelium is histologically identical to NKSSE (ectocervix, vagina) (see scheme C-D). Eventually the underlying openings of the glandular crypts might obliterate and together with dilated glands (C-D, 7) become retention cysts (nabothian cysts). The area of squamous metaplasia is called transformation zone i.e. the SCJ is of variable size and located approximately to the external os. In postmenopausal women the SCJ generally withdraws into the endocervical canal. Consequences of a constant change of epithelium might include a.o. development into abnormale epithelium and eventually progress toward cervical neoplasms.  Ad E: The vagina is a fibromuscular tube consisting of three layers:  a mucosal layer (NKSSE lining and proper lamina), a muscular layer (circular and longitudinal) and an outer adventitial layer (fibrocollageneous tissue). After puberty the NKSSE thickens due to mitoses in basal layers. Particularly the superficial layers are rich in glycogen and are therefore observed as clear cells. Glycogen increases after ovulation and then diminishes towards the end of the cycle. Lubrification of vaginal mucosa – especially around time of ovulation - occurred by moistening with mucus of uterine, endocervical glands and glands of Bartholin in the vestibule between vulva and vagina.   Mind that there are no glands at all in the normal vaginal wall. The thick subepithelial proper lamina contains  moderate dense connective tissue rich in meshworks of elastic fibers responsible for the vaginal elasticity during temporary distensions. Characteristic for this layer are many thin-walled vessels (mainly venules and veins) forming an extensive venous plexus. They are thought to be involved in diffusion of fluid across the epithelium and in this way contribute to the vaginal fluid. The muscular layer contains an internal circular one connected by oblique decussating fasciculi to a stronger external longitudinal layer. The latter is continuous with the superficial uterine smooth muscles. The lower part of the vagina is at the outside also reinforced by skeletal fibres of the bulbospongiosus muscle. The outer layer of adventitial connective tissue layer with thick elastic fibers contains large blood vessels, nerves and multipolar ganglion cells.

Clinical background 2:
The fibromuscular vagina is a tube from the vestibule (cleft between the labia minora) to the uterus. The annular recess between cervix and vagina is the fornix. The epithelial surface (NKSSE) shows two longitudinal medial ridges (anterior and posterior). From these vaginal columns numerous transverse bilateral rugae extend, divided by sulci of variable depth giving the appearance of conical papillae which are most numerous on the posterior wall and near the orifice of the vagina. Due to fermentation (a.o. Doderlein’s bacillus) of glycogen-rich squames the vaginal fluid is acid. This results in an inhibitory effect on growth of micro-organisms. In prepuberty and menopause there is less amount of glycogen and as a result more common vaginal infections. Using exfoliative cytology taking smears of surface cells cyclical variations in vagina epithelium are studied. Unlike many other mammals there are no marked changes during the human menstrual cycle. However exfoliative cytology studies are valuable in effectiveness of hormonal interventions. These applications include changes in vaginal cellular debris also occurring in uterine and cervical carcinomas.