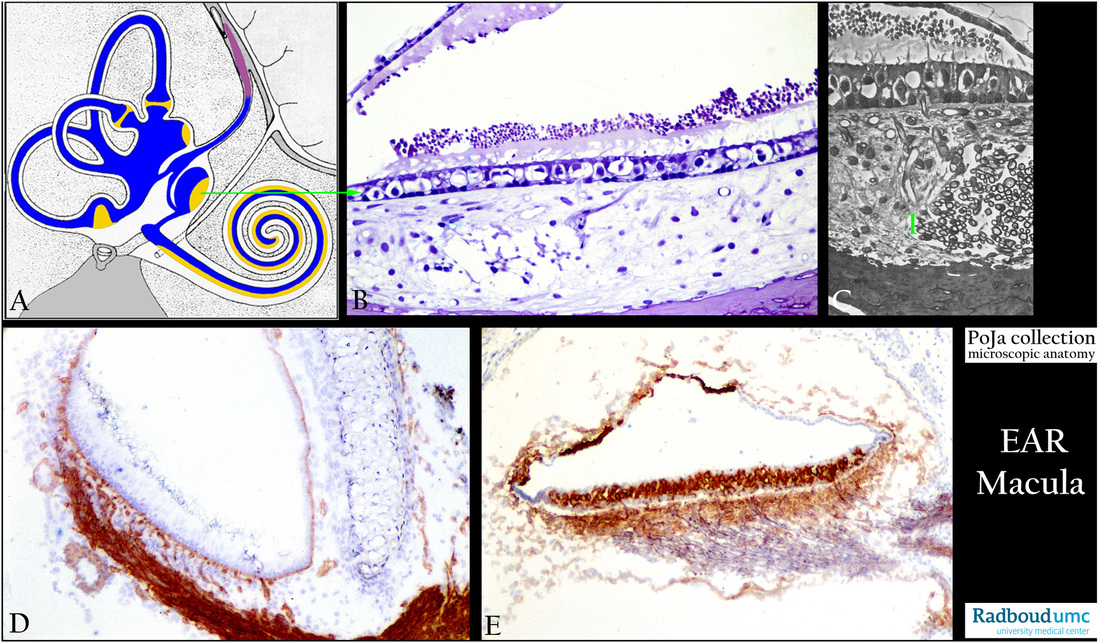 Title: Macula sacculi and otoconia in the inner ear

Description:
(A): Scheme inner ear, human. (By courtesy of W. Kuipers, PhD, former Head Biological Laboratory, Department of Otorhinolaryngology,
Radboud university medical center, Nijmegen, The Netherlands).
Blue is endolymph; white is perilymphe; yellow is neuroepithelium in macula, sacculus, coclea. Red-brown is the endolymphatic sac.
In the osseous labyrinth (grey-pointed) lies the membranous labyrinth (blue) and between them a space filled with delicate connective tissue and capillaries the so-called perilymphatic tissue (white space) where perilymph circulates.
With exception of specialised areas the cellular lining of the whole membranous labyrinth is flat to cuboidal.
The membranous labyrinth contains the auditory and vestibular system respectively cochlea and semicircular canals.
These semicircular canals are involved in angular acceleration i.e. a change in the rate of head rotation.

(B): Otoconia (or statoconia) in macula, stain toluidine blue semi-thin plastic section, rat.
(C): Otoconia in macula, stain toluidine blue semi-thin plastic section (phase contrast, black-white), rat.
Detail of cross- and longitudinal sectioned myelinated nerve fibres (1), and otoconia.
The saccule is that portion of the membranous labyrinth which is continuous with the cochlear duct, and the macula sacculi is attached
​ to the periost of the bony labyrinth.
The macula is composed of hair cells and supporting cells and lays vertically on the wall of the saccule. Each hair cell of a macula has
ca. 40-70 stereocilia as well as one true flexible kinocilium. All the stereocilairy tips are embedded in a jelly-like membrane called the otolithic membrane (with a.o. alpha and beta tectorin proteins). This membrane is weighed down by numerous blue-pink granules = otoconia (B).The otoconia add to the density and inertia of the membrane aiding in sensing gravity and motion (linear acceleration).
At the top of the saccule remnants of the otolith membrane and otoconia are still present.

(D): Macula, immunoperoxidase staining with AEC and antibodies against laminin, 1day postnatal, rat. Between the laminin-positive membranous saccule and the temporary cartilaginous labyrinth a connective tissue network with few positive capillaries are present (perilymphatic tissue). Laminin is positive in basal laminae-containing structures such as blood vessels and myelinated nerve (saccular nerve).
The negative-reacting hyaline cartilaginous tube is surrounded by a thin layer of perichondrial cells that give rise to the chondroblasts.  Between the cell groups the interterritorial matrix stains weakly bluish. During maturing the hyaline cartilage will be replaced by bone.

(E): Macula, immunoperoxidase staining with AEC and antibodies against Na+/K+-ATPase, 10days postnatal rat. This enzyme is involved
in the K+ transport of the endolymph (high K+ and low Na+). There is a high enzyme activity in the sensory epithelial cells and the intricate bundles of nerve fibres below. Subgroups of the non-sensory epithelial lining of the saccule are also positively stained.

Background:
- Otoancorin is located at the interface between the apical surface of the inner ear sensory epithelia and their overlying acellular gels.
In the vestibule otoancorin is present on the apical surface of nonsensory cells where they contact the otoconial membranes and
cupulae. It is proposed that otoancorin ensures the attachment of the inner ear acellular gels to the apical surface of the underlying                   nonsensory cells.
- Otogelin is a specific protein synthesised by nonsensory cells located underneath the acellular membranes such as otolithic and
accessory membranes of utricle and saccule and the acellular material covering the otoconia.
- Otoconin-90 (Oc90) is the major core matrix protein and accounts for more than 90% of the organic phase of otoconia.
- Otolin is a secreted glycoprotein present in both otoconial crystals and membranes. Otolin mRNA in utricle and scaccule is much
higher than that in the epithelia of non-otolithic inner ear organs. Co-expressing of Oc90 with otolin leads to increased exttracellular               matrix calcification, otolin may function similarly to collagen X.