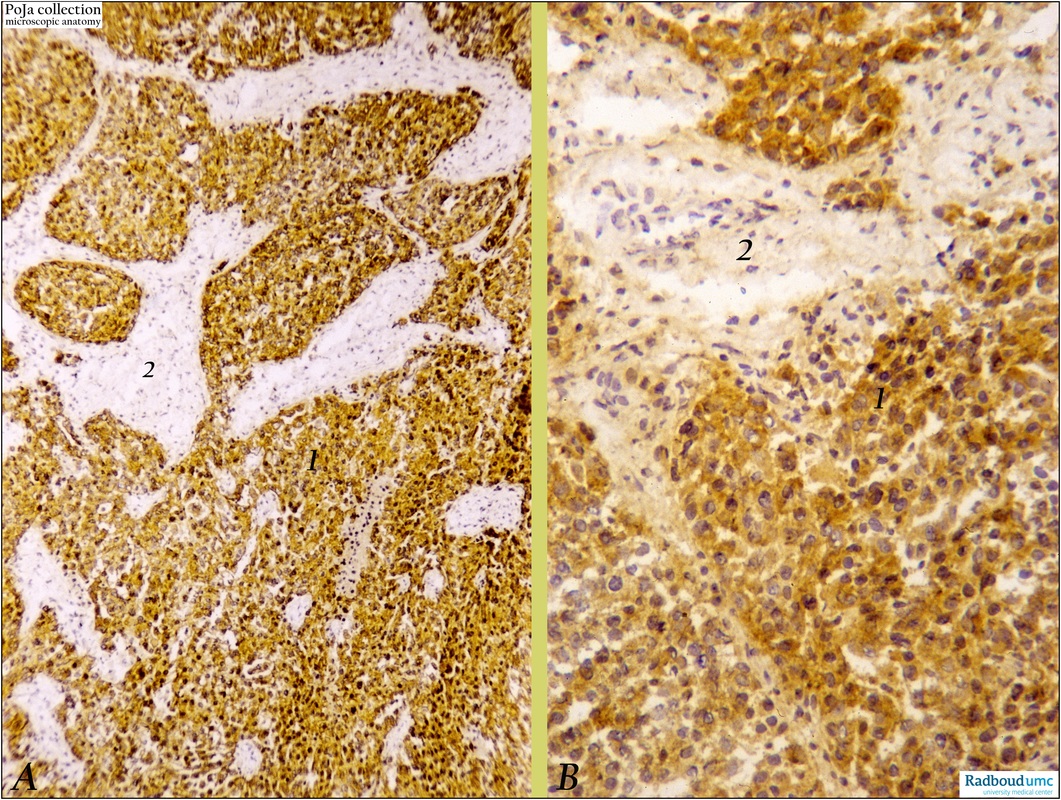 (A):  All tumor cells (1) react positively with the broad-spectrum antikeratin antibody, confirming their epithelial origin and properties. Stroma is negative (2).

Background:  Epithelial tumors from the ovary are believed to originate from undifferentiated cells in the surface ovarian epithelium (serosa). They arise either directly from that epithelium or from epithelial nests that are sequestrated into the cortex. These epithelial cells and nests still maintain their keratin expression and upon transforming into malignant, well differentiated serous tumors detectable ovarian carcinoma epitopes are gradually developed in addition. Hence the use of combined conventional histology and immunohistochemistry confirms the diagnosis more easily and precisely.
Histogenetically it is assumed that a majority of epithelial tumors of the ovary is derived from the ovarian serosa. This lining is the equivalent of the embryonic coelomic epithelium in adulthood. Embryologically the coelomic epithelium give rise to the müllerian epithelium (ducts of Müller) and its derivates are the fallopian tube lining (tubal pathway), endometrial lining (endometrial pathway) and endocervical glands lining (endocervical pathway). The ovarian surface epithelium contains undifferentiated cells that have the latent potential to differentiate along similar embryonic pathways. Epithelial tumors from these cells that differentiate along the tubal pathway are known as the so-called serous tumors. Serous cystadenocarcinomas are essentially a malignant form of serous cystadenomas; they account for ca. 40% of all ovarian cancers and appear to be the most common malignant tumors. With hemorrhagic foci the tumors are cystic but also partially solid. Solid areas of the tumor are composed of closely packed papillae that might penetrate the tumor capsule. Destructive infiltrative stromal invasion is evident as the tumor ingrowth is diffuse or as solid cell sheets.