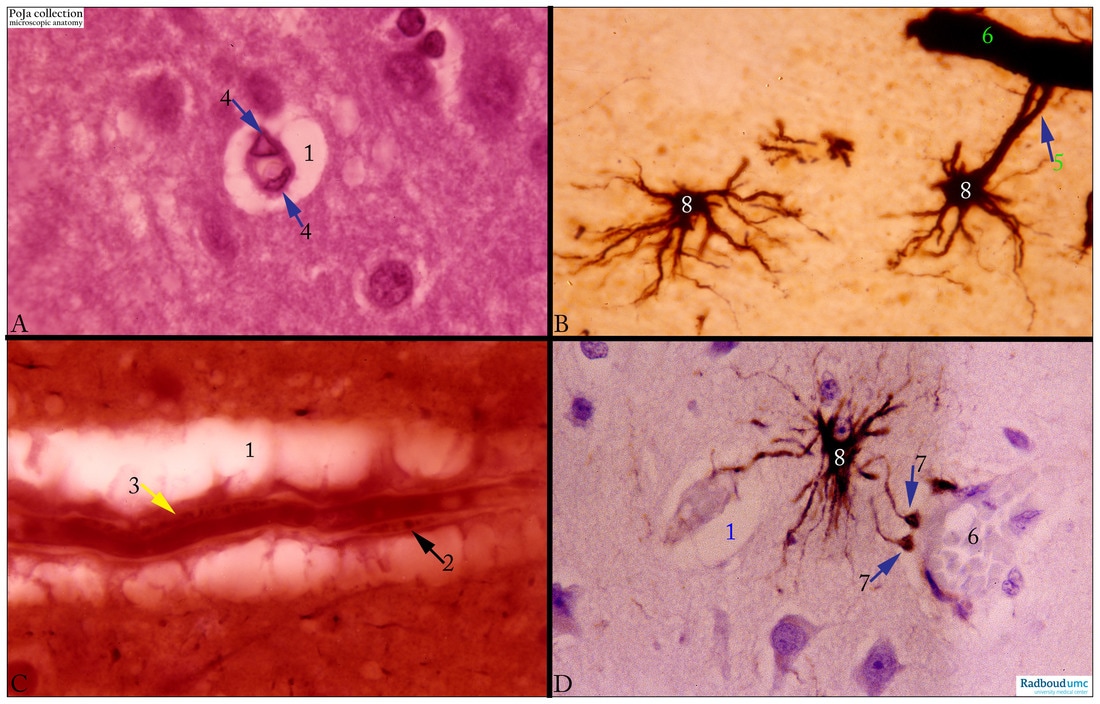 (D): GFAP immunostained cerebrum, human. Brown-stained endfeet (7) of astrocyte (8) in close contact with the wall of the blood vessel (6) surrounded with paravascular spaces (1).
Endfeet of astro-glial cells are involved in the paravascular cerebrospinal fluid-interstitial fluid exchange  and contribute to trans-parenchymal clearance pathway of proteins/waste product and excess extracellular fluids.

1.  LYMPHATIC SYSTEM
In contrary to the cardiovascular system the lymphatic system  is not a closed system. When interstitial tissue fluid enters the initial lymphatic capillaries the fluid is called lymph and contains a.o. surplus of interstitial tissue fluid, waste products, circulating white blood cells and that material will be transported via lymph nodes to the lymphatic ducts that drain into the subclavian vein and subsequently toward the heart. The propeller action is provided by  both contraction of the smooth muscle cells (peristalsis)  in the wall of the lymphatic vessels as well as by  contractions of surrounding skeletal muscles.
The clearance of extracellular proteins end excess fluid from the interstitium facilitated by the lymphatic circulation is critical to tissue homeostasis and function. Efficient removal of soluble proteins from the interstitial fluid regulated both colloidal osmotic pressure and homeostatic control of the body’s fluid volume. When obstruction occurs in the lymphatic system edema results due to impairment of lymphatic clearance and accumulaton of interstitial solutes.


2. GLYMPHATIC SYSTEM
On the other hand in the brain a Glymphatic system ( Glymphatics clearance pathway or glio-paravascular pathway) exists that acts much like the lymphatic system but is managed by brain cells i.e. astro-glia cells.
Cerebrospinal fluid (CSF) is known to play an important role in the clearance of interstitial solutes and carrying nutrients to brain tissue by diffusion. The glymphatic system is a pathway formed by a brain-wide network of paravascular channels.

A large proportion of the subarachnoid CSF recirculates in these channels through the brain parenchyma. It facilitates the clearance of interstitial solutes from the brain interstitium to the CSF compartment.  The solutes are then eliminated to the blood stream via arachnoid granulations of the dural sinuses or to peripheral lymphatics along the cranial nerve sheaths. Dural sinuses and meningeal arteries are lined with conventional lymphatic vessels and  this vasculature forms the connecting pathway for the entrance and exit of lymphatic fluid and immune cells from the meningeal compartment to the glymphatic system.

The glymphatic clearance pathway (glymphatic system) comprises 1. a para-arterial influx route for cerebrospinal fluid (CSF) to enter the brain parenchyma. Paravascular spaces are CSF-filled channels formed between the brain blood vessels and leptomeningeal sheathes  surrounding cerebral surface vessels and proximal penetrating vessels. Around these penetrating vessels  paravascular spaces take the form of Vichow-Robin spaces. Where these latter spaces terminate within the brain parenchyma, paravascular CSF continue along the basal laminae of surrounding arterial VSM to reach the capillary basal laminae. In this way a large proportion of subarachnoid CSF rapidly enters the brain parenchyma and at all levels of this route CSF enters into the interstitial space. The glymphatic system circulates CSF much more efficiently to every corner of the brain, so-called convection or bulk flow.

2. Coupling to a para-venous clearance route for removal of interstitial fluid (ISF)/extracellular solutes from interstitia of the brain/spinal cord. CSF exhanges with the brain interstitial fluid (ISF). Fluid secreted by the Blood-Brain barrier also contributes to the fluid in the interstitium.. ISF and parenchymal solutes (e.g. amyloid) appear to be cleared from the brain along paravenous routes and is restricted to a specific group of large caliber draining veins.

4. Trans-parenchymal clearance pathway of soluble proteins/waste products/excess extracellular fluid through bulk flow of the ISF by facilitation of astro-glial aquaporin 4 water (AQP4) channels. AQP4 is essential for the paravascular CSF-ISF exchange. Endfeet of astro-glial cells that envelop the cerebral vasculature densely express the water channel aquaporin-4 AQP4) which allow the astrocytes to act as intervening ‘couplers’ of a bulk interstitial (ISF) flow. Trangenic animals that lacked AQP4 exhibited a 70% reduction in the clearance of large solutes such as amyloid-peptide.