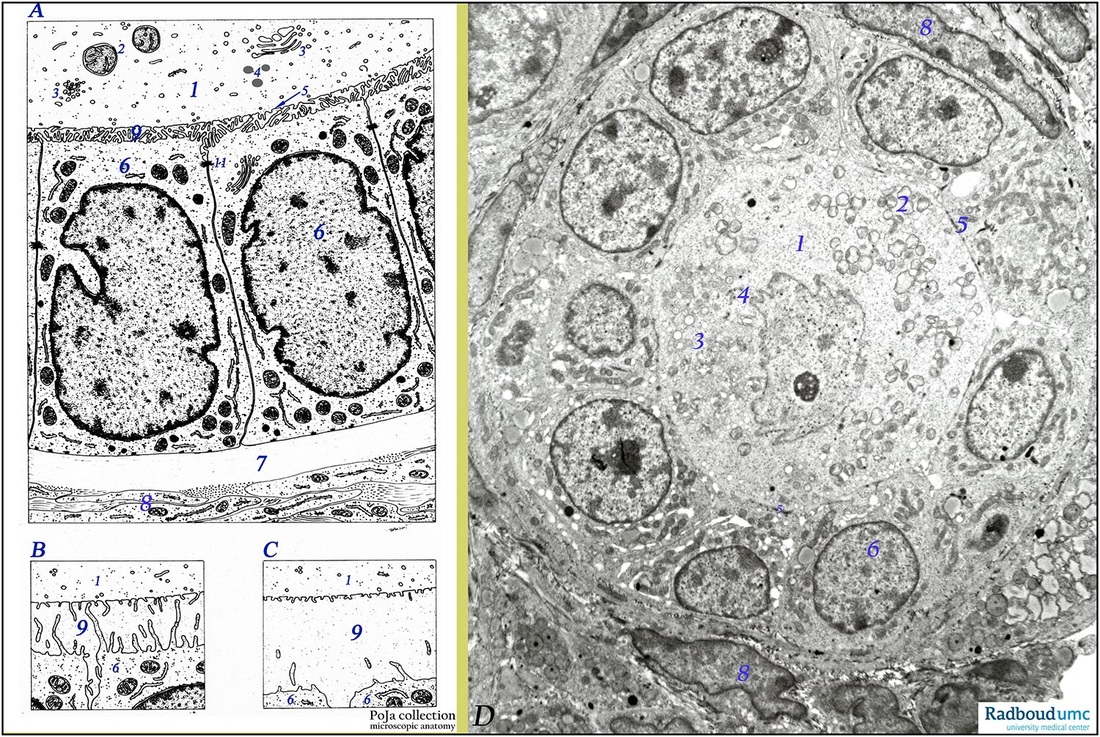 Title: Electron microscopy of development of the zona pellucida

(A, 1) represents a small part of the cytoplasm of the oocyte of a unilaminar primary follicle (type 2). The cytoplasm contains a few mitochondria (2) and Golgi complexes exposed as aggregates of vesicles and tubules (3).  They are involved in the synthesis of cortical granules (4). The oocyte is separated from the single layer of follicular granulosa cells (6) by a small perioocytic space with extracellular matrix molecules (5) becoming the future zona pellucida (9). The epithelial granulosa cells possess desmosomal contacts (11).
The border between the follicle and ovarian stroma is formed by a thick membrane (membrana vitrea) (7), consisting of a basal basal lamina reinforced with collagen and reticular fibers.  At (8) the former stromal cells are arranged into the differentiated internal theca cells with thin collagen fibers as a component of the cellular capsule (theca) around the follicle.

(B, C): During development of the follicle the oocyte starts to synthesize a glycoprotein coat, the zona pellucida (9) about 6-7 µm thick. This zone progressively separates follicular cells (granulosa cells of future corona radiata) from oocyte. The zona pellucida is penetrated by tiny cytoplasmic processes of follicular cells that contact microvilli of the oocyte. Gap junctions present at contact sites (not shown) indicate a functional interaction between both two cell types. With continuous proliferation of the follicular (granulosa) cells in the secondary follicle, the zona pellucida thickens (C, 9).

Background: Microvilli from the granulosa cells (corona radiata) quite likely provide a sort of cytoplasmic skeleton for the zona pellucida. They are possibly involved in transport of nutrients/ catabolites to/from oocyte. Immunohistologically zona pellucida proteins are detected in cytoplasm of cuboidal granulosa cells and their distribution correlates with developmental stages throughout folliculogenesis. These proteins are also detected in oocyte and granulosa cells as early as the primordial follicle. The zona pellucida plays an important role in the fertilization process; it is composed of a.o. glycoproteins ZPGp1, ZPGp2, ZPGp3 and ZPGp4. It is known that capacitating (occurring while sperm reside in the female reproductive tract 1 up to 6 hours) includes the process of loss of spermatozoal glycocalyx as well as vesiculation of the acrosome of spermatozoon. In the binding process of spermatozoa oligosaccharides linked to ZPGp3 interact with sperm receptors. It appears that only acrosome-reacted spermatozoon can interact with ZPGp3. The cortical reaction refers to the exocytosis of cortical granules (produced by Golgi areas) discharging their contents (mixtures of proteases) in the zona pellucida shortly after sperm-oocyte fusion. Proteases alter the pellucidal structure resulting in a specific transformation of the zona pellucida that penetration by other capacitated spermatozoa (polyspermy) is prevented (so-called zona reaction).