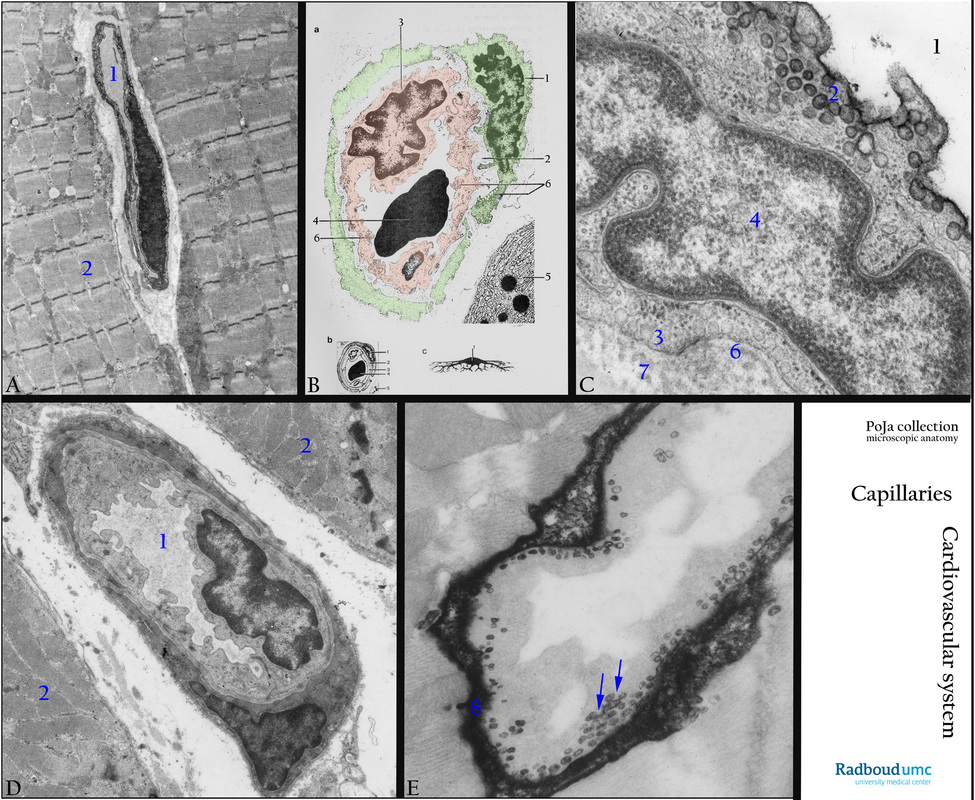 Description:
(A):  Electron micrograph of capillary in skeletal muscle, human. Note the sarcomeres (2), the capillary (1) has a so-called continuous endothelium with numerous pinocytotic vesicles indicating a high transport activity. A common basal lamina is shared by the small processes of a pericyte and the endothelial cell.

(D): Electron micrograph of a capillary (1) in skeletal muscle with sarcomeres (2), rat. The capillary shows similar structures as shown in the scheme of (B).

(D): Electron microscopy, capillary pinocytosis (skeletal muscle), DAB-stained section (1 h) after intra-arterial administration of peroxidase, EM, rat. After 1 h no more tracer is present in the capillary lumen and numerous final pinocytotic vesicles are in transcytosis towards the basolateral site of the capillary. Most pinocytotic vesicles (arrows) are partly dense-stained by application of DAB due to their content of the peroxidase tracer. However, after 1 h most tracer-protein already accumulated in the interstitium (8).

Usually the diameter of capillaries ranges from 6 to 30 micrometers. Except for the nucleated area the thin cytoplasm is 100-200 nm thick and the basal lamina measures about 60 nm.  Endothelial cells line the inner surface of the capillary and pericytes line the outer surface of the capillary and also stabilise the capillary walls. Capillaries with continuous endothelium are the most common vessels and they are enclosed by an uninterrupted basal membrane i.e. somatic capillaries e.g. in striated muscle. Facing the lumen regions of the plasmalemma of endothelial cells are occupied with caveolae. Numerous invaginations are present at the cytoplasmic site of the cell membrane. These so-called caveolae or plasmalemma vesicles (diameter 60-80 nm) are involved in clathrin-independent endocytosis. This type of uptake is included in the pinocytotic pathway i.e. pinocytosis is the process of endocytosis mediated by different vesicular mechanisms responsible for both receptor-mediated and fluid-phase endocytosis. These caveolae are formed by invaginations as the result of binding of the protein caveolin-3 ( encoded by the caveolin gene family)  to cholesterol. Caveolae are microdomains of lipid rafts specialised to organise signaling molecules and ion channels in the cell membrane. The plasmalemmal caveolae contain a host of receptors and in close proximity ion channels (e.g. L- type calcium channels, ATP-sensitive potassium channels). These caveolae pinch off from the cell membrane i.e. pinocytosis and travel as vesicles by transcytosis in the cytoplasm, subsequently fuse with the opposite plasmalemma followed by incorporation and the release of their content by exocytosis. These invaginations in the plasmalemma contain a host of receptors (i.a. endothelin, adrenergic receptors, muscarin receptors, serotonin), second messenger generators (such as adenylate cyclase, phospholipase C), G proteins (e.g. RhoA), c.q. kinases (e.g. protein kinase A and C) and in close proximity ion channels (e.g. L- type calcium channels, ATP- sensitive potassium channels).

Background 2: Ultrastructure of the basal lamina.
In light microscopy a basement membrane (20-50 nm thick) separates endothelial cells from the surrounding connective tissue (i.a. proper lamina). It encompasses two fused membranes i.e. the basal lamina (secreted by endothelial cells) and a close apposed reticular lamina (secreted by other cells). The latter is absent when a connective compartment lacks (e.g. kidney glomerulus, heart muscle). The basal lamina (lamina basalis) is a specialised form of extracellular matrix (ECM) and is often referred to as the type IV matrix composed of a lamina lucida and a lamina densa. Nowadays with the development of new electron microscopic preparation techniques,  it appears that in the living state, the basal lamina is composed of a single dense layer (lamina densa). The former described lamina lucida is assumed to be an artifact of fixation.
Traditionally in the  electronmicroscope  a basal lamina is composed of three sublayers: a 'clear' or 'lucid' layer (lamina lucida ca. 30- 60 nm thick) close to the endothelial cells, an intermediate electron-dense layer (lamina densa, average 30-50 nm thick) and a thin hardly electron-dense lamina fibroreticularis  (ca. 10 nm) closer to the connective tissue compartment. Within the 'electron-lucid' layer laminins, integrins, entactins and dystroglycan are localised. The lamina densa contains a network of collagen IV coated with perlecan (a heparan sulfate proteoglycan).  From the basal lamina anchoring fibrils type VII collagen extend from the lamina fibroreticularis  with microfibrils into the connective tissue compartment. In this compartment the tissue is composed of cells distributed in a meshwork of collagen fibres (main forms I, II, III), glycoproteins, proteoglycans and hyaluronic acid. The laminins form a family of large, non-collagenous glycoproteins that are secreted and incorporated into cell-associated ECM. They are localised in the 'lucid' layer and anchor cell surfaces to basal laminae, form independent networks and associate with type IV collagen networks via perlecan and entactin. Integrins are transmembrane receptors that mediate attachment between cells and surrounding tissues and play a role in cell signaling. They regulate cell shape, motility and bind cell surface and ECM components such as laminin, collagen, fibronectin etc.  Entactin belongs to the nidogen family, nidogen-1/-2 is a basal lamina glycoprotein that i.a. interacts with laminin, type IV collagen. Dystroglycan is a transmembrane protein, highly glycosylated and belongs to the dystrophin-associated glycoprotein complex. It is a receptor for multiple ECM molecules (i.a. laminin, perlecan) and plays a role in linking the ECM molecules to the actin cytoskeleton via the actin-binding protein dystrophin.                                                                                        (See: Cold Spring Harb Perspect Biol. 2011 Feb; 3(2): a004911. doi:  10.1101/cshperspect.a004911 PMCID: PMC3039528. Basement Membranes: Cell Scaffoldings and Signaling Platforms. Peter D. Yurchenco
http://www.ncbi.nlmhttp://www.ncbi.nlm.nih.gov/pmc/articles/PMC3039528/).
.